These deliveries to Hobby Lobby were labeled tile samples. They were ancient artifacts smuggled from Iraq. 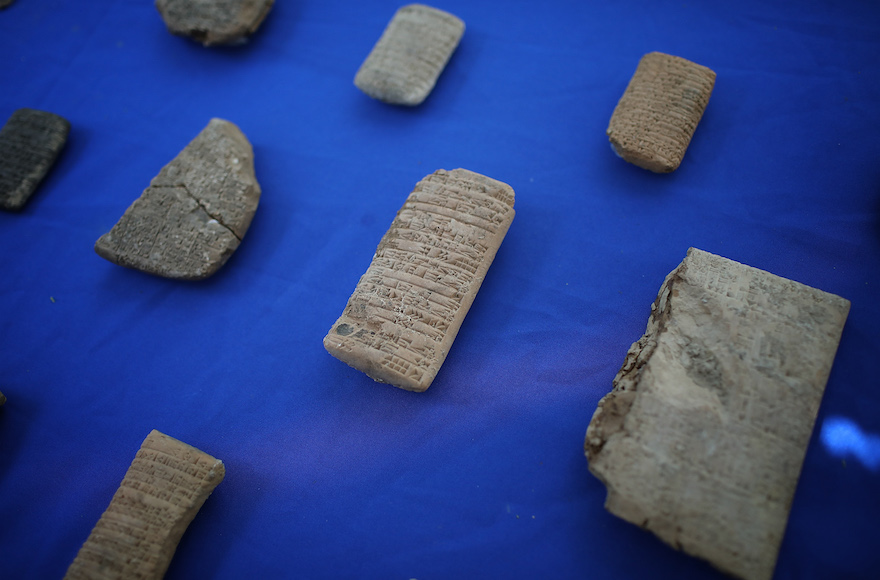 Ancient artifacts, smuggled into the U.S. in violation of federal law and shipped to Hobby Lobby stores, are shown at an event in Washington, D.C., May 2, 2018. (Win McNamee/Getty Images)
Advertisement

(JTA) — The United States returned some 3,800 ancient artifacts to Iraq that had been smuggled to the U.S. retailer Hobby Lobby through the United Arab Emirates and Israel.

The packages containing cuneiform tablets, cylinder seals and clay bullae, as well as other artifacts, were labeled as tile samples. Most of the artifacts originated in the ancient city of Irisagrig and date back to 2100-1600 BCE. They were intercepted by U.S. Immigration and Customs Enforcement on their way to three addresses in Oklahoma City, where Hobby Lobby is headquartered.

The company agreed last year to forfeit the artifacts and pay $3 million to settle a civil lawsuit brought by the U.S. government.

A repatriation ceremony was held Wednesday in Washington, D.C.

The objects will be turned over to Iraq’s Ministry of Culture and to museums and universities for study and exhibition, Iraq’s ambassador to the United States, Fareed Yasseen, reportedly said.

In a statement several months ago, the company said it had been acquiring artifacts “consistent with the company’s mission and passion for the Bible,” with the goal of preserving them for future generations and sharing them with public institutions and museums.