Trump’s faith-based initiative removes a barrier to proselytizing, and some Jews are worried 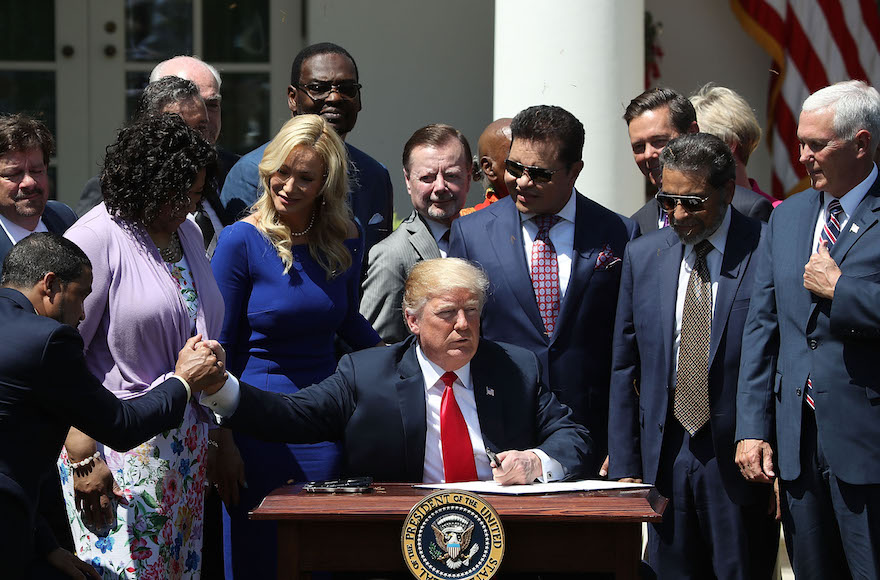 Flanked by members of different faith-based communities, President Donald Trump signed a proclamation declaring May 3 as National Day of Prayer, during an event in the Rose Garden at the White House, May 3, 2018. (Mark Wilson/Getty Images)
Advertisement

WASHINGTON (JTA) — Flanked by clergy — including a priest, an imam and an Orthodox rabbi — President Donald Trump revived the White House Office of Faith-Based and Community Initiatives, a system that since its 2001 launch has delivered humanitarian assistance to Americans through religious organizations.

“Americans of faith have built the hospitals that care for our sick, the homes that tend to our elderly, and the charities that house the orphaned, and they minister — and they really do, they minister to the poor, and so beautifully and with such love,” Trump said in remarks Thursday in the Rose Garden.

Buried in legal speak in the executive order, however, was a clause that left liberal-leaning Jewish groups aghast: Trump removed a section that required religious groups using government money to refer applicants to appropriate alternatives if the applicant did not want a dose of salvation with their relief.

Marc Stern, the counsel for the American Jewish Committee, said the now moot requirement protected the starving man from having to listen to a sermon before entering a soup kitchen for a meal.

“It’s always been thought that the provision of an alternative is an essential element of preserving religious liberty,” Stern said in an interview. “Dropping it is more than a step backward. Forced sermons remind us” — Jews — “of efforts at various times to make us listen to conversionary sermons.”

Orthodox groups welcomed the re-establishment of the faith-based initiative office and Trump’s expansion of its ambit to the entire executive branch. But groups that lobbied hard for the protection under past administrations were quick to object.

The order “puts America’s most vulnerable citizens at risk of choosing between accessing essential, taxpayer-funded social services and being subject to unwanted proselytizing or religious activity,” the Anti-Defamation League said in a statement.

“Any White House faith-based initiative must uphold and enhance constitutional protections for the separation of church and state and protect the rights of all people, regardless of their faith,” the Reform movement’s Religious Action Center said.

Conservative religious groups were pleased by the executive order not only because it reopens an office that has been moribund since Trump assumed office in 2017, but because it expands the scope of the office.

The office steers funding to faith-based groups to carry out humanitarian interventions, including delivering food to the needy and administering addiction rehabilitation programs. Trump will expand its reach to all government agencies.

President George W. Bush launched the office in 2001 and Barack Obama — to the surprise of some — maintained it, but launched a lengthy review process to make sure it operated within constitutional church-state separations.

Conservative religious groups have chafed at the Obama-imposed restrictions, saying they inhibited productive partnerships with proven relief providers. Michelle Boorstein, The Washington Post religion correspondent, tweeted a quote from an unnamed Trump administration official saying the idea behind this week’s order was to launch programs “without all of these arbitrary concerns as to what is appropriate.”

That outraged Jack Moline, a Conservative movement rabbi who is the president of the Interfaith Alliance, a liberal-leaning umbrella group.

“President Trump and his staff would do well to remember that we are a nation of laws, not prayers, and that there is nothing arbitrary in respecting the First Amendment,” he said in an emailed statement linking to Boorstein’s tweet.

It probably didn’t help that Trump, in extemporized remarks at the signing, goaded church-state separationists, saying that the use of the phrase “Merry Christmas” had increased since he assumed office. He provided no evidence for his claim.

“We’re starting to say ‘Merry Christmas’ when that day comes around,” the president said to applause. “You notice the big difference between now and two or three years ago?”

Agudath Israel of America, a haredi Orthodox umbrella group, welcomed Trump’s order. Rabbi Abba Cohen, Agudah’s Washington director, said in an email that “with or without the executive order provision, we believe that the First Amendment has no tolerance for ‘forced’ proselytization, and that is why we have always supported referrals.” He suggested however that this might be an opportunity to rethink whether the faith-based provider or the government should be the one responsible for the referrals.

“Federal or local offices are often better situated, have more resources and less limitations than faith-based providers have in regard to finding accommodations for objectors,” said Cohen, who also attended the signing ceremony. “If a faith-based provider is able and willing to help with a referral, as they generally have been, that’s fine. But being mandated to do this is not beneficial when it is taking their energies away when they would be better utilized in providing actual services.”

Other Orthodox groups, while supporting the overall order and the expansion of the office, were also less than sanguine about the removal of the requirement for referrals.

“I certainly would have preferred that provision not be eliminated in the new executive order,” Nathan Diament, the Washington director for the Orthodox Union, said in an email. “That said, other critical protections we developed and were adopted in the Obama executive order remain in place — the most important of which are that the faith-based entity receiving a government grant may not use the grant funds for its religious activities and that those religious activities must take place at a separate time and in a separate location from the government-funded activities.”

The Orthodox Union, like Agudah, praised Trump’s order. Diament, in a statement noting that he attended the signing ceremony, said the notion of faith-based collaboration spanned Republican and Democratic administrations.

“This bipartisan continuity is an important statement of principle and rebuttal to those who would seek to have government policy discriminate against faith-based entities,” he said.

Rabbi Levi Shemtov, the executive vice president of Friends of Lubavitch (Chabad), who delivered a prayer for the nation at the signing, said he would raise the removal of the protection with the administration.

“Any time somebody doesn’t feel comfortable religiously in the context of humanitarian assistance it’s a cause for concern and review, and I definitely intend to be in touch with the administration as appropriate to learn what implications this might have,” he said. “At the same time, I would doubt that a religious institution offering humanitarian help would be crass in this regard if the person needing this help objected.”

Stern of the American Jewish Committee said it’s not a question of having to accept an institution’s religious beliefs, but being forced to listen to them in the first place. He predicted that a civil rights group would soon challenge the order with a lawsuit.

For Shemtov, the mere opportunity to deliver a blessing at the White House for an office that extends government cooperation to all religions was a cause for celebration.

“As a Jew, so mindful of my forebears and their tribulations, I am deeply grateful to the president for this invitation and for the opportunity this gives me to publicly offer this prayer freely from my heart and according to my own faith,” he said at the White House.

Shemtov explained later in an interview that both his grandfathers and his great-grandfather had been jailed by the KGB in the former Soviet Union for their religious observance and teaching.