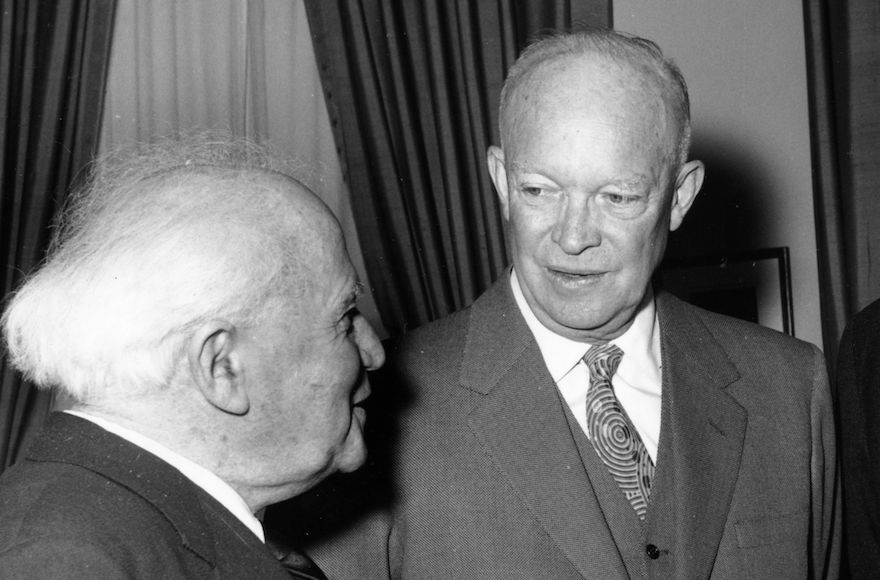 (JTA) — Dwight David Eisenhower sailed into office in the 1952 election because he was the general who ended World War II.

There was a specifically Jewish reason to buy into the hero worship: Eisenhower insisted that the world learn of the barbarism he witnessed when he liberated the Nazi death and concentration camps because he correctly anticipated there would be efforts to deny it.

Speaking to a group of journalists and congressmen he had led through Buchenwald in 1945, he said: “You saw only one camp yesterday. There are many others. Your responsibilities, I believe, extend into a great field, and informing the people at home of things like these atrocities is one of them.”

His comprehension of the horror included the realization that Jews were its principal victims.

“The Jews were in the most deplorable condition. For years they had been beaten, starved, and tortured,” he wrote in his 1948 account of the war, “Crusade in Europe.”

Nevertheless, Eisenhower believed Truman tilted U.S. policy toward Israel and sought a more “balanced” approach, which led to years of frustrations with Israel and to the establishment of two important Jewish institutions: the American Israel Public Affairs Committee, which cultivated support for Israel in Congress, as a means of tempering Eisenhower’s coolness toward the state, and the Conference of Presidents of Major American Jewish Organizations, established to show Eisenhower that the U.S. Jewish community was unanimous in its support for Israel. (Eisenhower aides had played up support for Israel-critical policies by marginal Jewish anti-Israel groups to explain his coolness to the country.)

The relationship reached a crisis in 1956 after Israel joined Britain and France in capturing the Sinai peninsula as a means of keeping Egypt from nationalizing the Suez Canal. Eisenhower was furious, and his pressure on Israel forced a pullout. He contemplated cutting off not only U.S. assistance to Israel but private money going to the Jewish state, he later wrote.

Who stood in the Republican president’s way? The Senate majority leader, a Democrat from Texas named Lyndon Baines Johnson, who said that “cracking down” on Israel would show a double standard, considering how soft Eisenhower had been on the repression of democratic protesters in Hungary the same year.