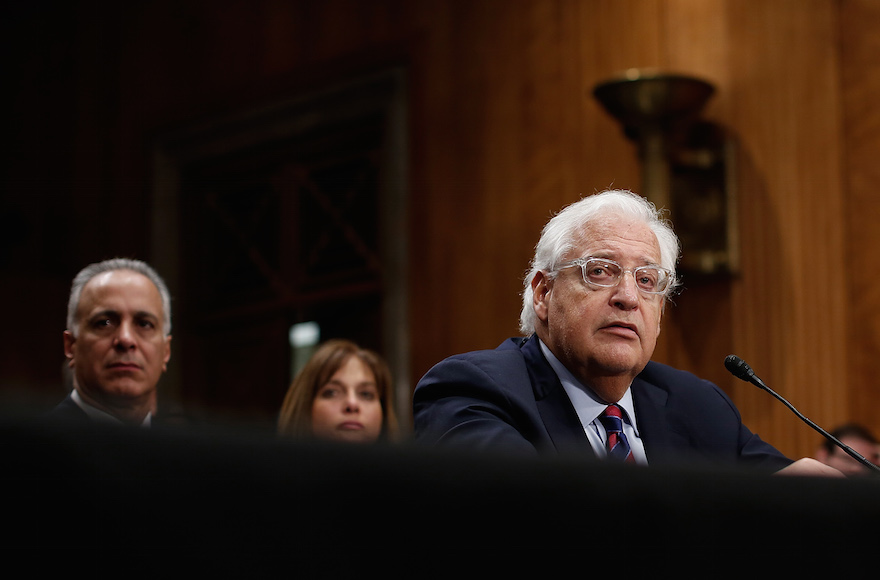 EDITOR’S NOTE: An earlier version of this story said that Qomemiyut is on the U.S. State Department designated terrorist list. The State Department list includes a group by that name, but the group that received the donation says it is not the same group, noting that the current iteration was established in 2006, seven years after the State Department started including an earlier group with the same name on the list. In response to a question from JTA, the director of Qomemiyut appeared to confirm his group was the same as the older group. But in a subsequent interview with Arutz Sheva, he said he had misunderstood the question and insisted the groups were not connected.

WASHINGTON (JTA) — David Friedman, the U.S. ambassador to Israel, was president of a non-profit that donated money to a far-right Jewish group.

American Friends of Bet El Yeshiva Center donated 48,000 shekels — about $12,000 — to Qomemiyut in 2013, when Friedman was president of the non-profit, according to a report by the Democratic Bloc, an Israeli NGO that tracks funding for right-wing groups.

The U.S. Embassy spokeswoman did not respond to multiple requests from JTA for comment. Haaretz on Thursday quoted Friedman’s office as saying that “The Ambassador is not familiar with the Qomemiut Foundation, nor is he aware of any connection between those entities and American Friends of Bet El Yeshiva Center.”

Qomemiyut translates as “sovereignty,” but also shares a root in Hebrew with the word “uprising.” Its officers are a who’s who of Israel’s hard right, including Knesset member Betzalel Smotrich, a member of the extreme faction of the Jewish Home Party, and Dov Lior, the former rabbi of Kiryat Arba who has repeatedly been accused of incitement. In 2014, Lior said Jewish law allows for the destruction of the Gaza Strip.

On its Facebook page, Qomemiyut describes its mission as the “strengthening and instilling of the values of the righteousness of the Jewish renewal and preventing the expulsion of the Jews from Judea, Samaria and the Golan Heights.” It has protested on behalf of Israeli Jews accused of incitement and has called on Jewish landlords not to rent to Arabs.

During his 2017 confirmation hearings, Friedman described his leadership of the nonprofit, from 2011-2017, as deriving “from my commitment to Jewish education, the quality of those schools are excellent and everything that we’ve given money to has been in the nature of gymnasiums, dormitories, dining rooms, classrooms, things like that.”

He said he had no association with political activity associated with the Beit El settlement.

“So my philanthropic activity there has not been connected to their political activity which I really had no part in,” he said.

In its 2013 IRS 990 form, American Friends of Bet El Yeshiva Center listed under “organizations or entities outside the United States” receiving “grants or assistance” “general support for the school” and nothing else. The 990 form is the tax return for non-profits. The group took in $1,874,013 that year and dispensed $1,541,500.

Friedman was President Donald Trump’s bankruptcy lawyer before Trump was elected president. He is seen as the main driver behind Trump’s decision to move the U.S. Embassy to Jerusalem.

“I put one of my friends as ambassador to Israel, David Friedman, good choice, one of the great lawyers of our country, made a lot of money as a lawyer,” Trump said at an Indiana rally on Thursday.

Reached by phone on Friday, a spokesman for American Friends of Bet El Yeshiva Center told JTA  that he did not have time to check into the Democratic Bloc’s report or to describe what the responsibilities of a president of the organization would be. JTA has sent the spokesman an email listing the questions.

Mussa Cohen, the Qomemiyut director, told Haaretz that he did not know if Friedman was aware of the donation. The group funds a range of settler-affiliated programs in Israel, particularly in Beit El, a settlement north of Jerusalem, where Qomemiyut is also headquartered. Friedman as a young man studied at the yeshiva in Beit El.

Another of the American Friends of Bet El Center’s major beneficiaries is Arutz Sheva, the influential settler-affiliated news network.

The Democratic Bloc said the groups are the same; it provided to JTA a declaration from another American Friends of Bet El Yeshiva Center beneficiary, the yeshiva in the Beit El settlement where Friedman once studied. It lists the U.S. employer identification number for its main donor, named in Hebrew as “Shocharei Yeshivat Beit El”; it is identical to the employer identification number for American Friends of Bet El Yeshiva Center.

The Democratic Bloc was established recently as part of a counteroffensive by liberal and left-wing NGOs in Israel. There have long been NGOs in Israel that track and report funding sources for left-wing groups.