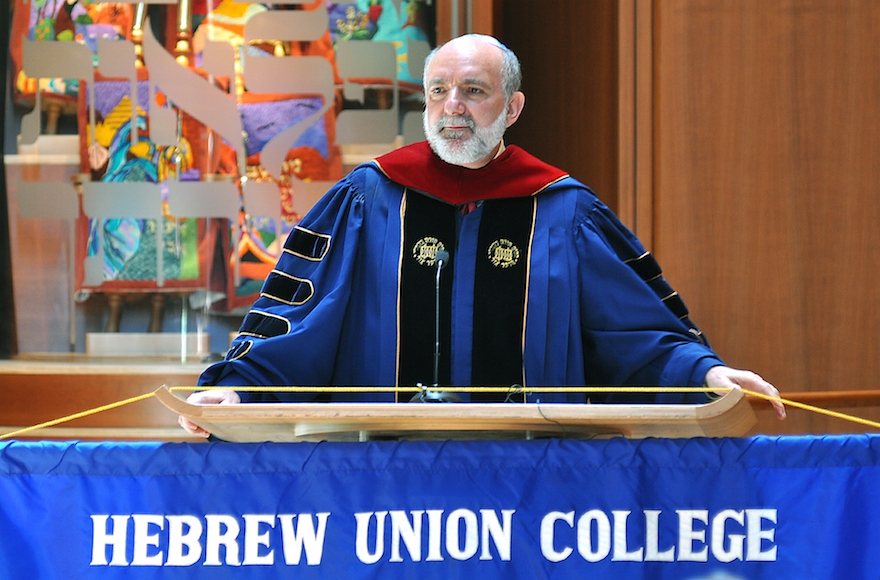 On Monday, the Reform movement’s flagship seminary, said Ellenson would serve as interim president of its four campuses in New York, Jerusalem, Cincinnati and Los Angeles. He previously served in the role from 2001 to 2013, prior to Panken’s appointment.

Panken, a licensed pilot, was killed on May 5 at the age of 53 while piloting a small aircraft near Wawayanda, New York, near the New Jersey border. A passenger, Frank Reiss, a flight instructor, was injured in the crash. The cause of the accident is unclear and pending investigation by the the Federal Aviation Administration and the National Transportation Safety Board.

Panken was remembered by colleagues and friends as a joyful leader who was passionate about Israel and embodied “the best of the Reform movement.”

In a statement on Monday, Ellenson, who is concluding his tenure as director of the Schusterman Center for Israel Studies at Brandeis University, praised Panken’s legacy.

“Rabbi Aaron Panken will be remembered for his leadership, skills, visions, judgment, and ability to inspire and move others to action,” Ellenson said. “I am confident that his dreams for HUC-JIR will yet be realized through the foundations he constructed and the visions he has bequeathed us. These dreams and visions will constitute his unforgettable monument, as we secure his enduring legacy.”

Ellenson is a scholar of modern Jewish thought and history who has worked at institutions including the University of Southern California, the Jewish Theological Seminary, the Shalom Hartman Institute, the Hebrew University of Jerusalem and New York University.