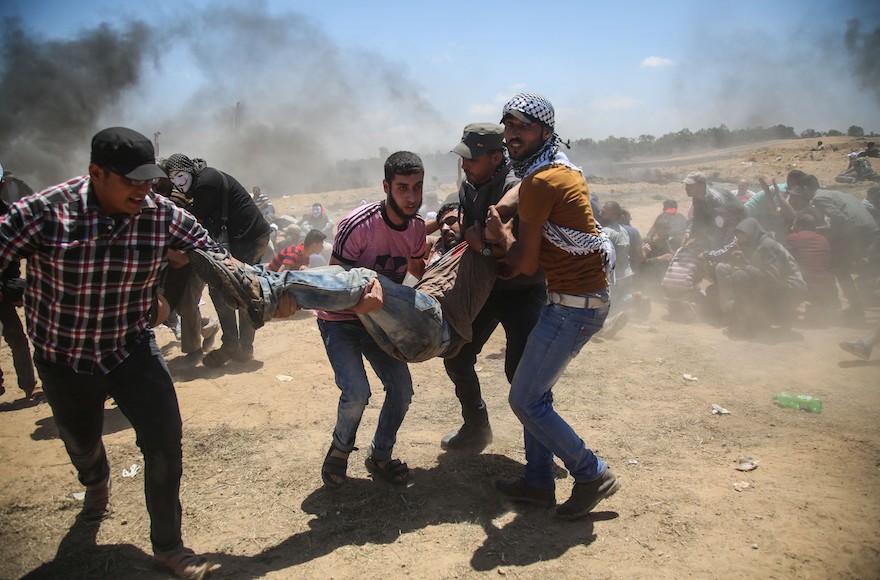 Palestinians carrying a wounded man during a protest against United States' plans to relocate its embassy from Tel Aviv to Jerusalem, near Al Bureij Refugee Camp at the Gaza-Israel border, May 14, 2018. (Hassan Jedi/Anadolu Agency/Getty Images)
Advertisement

JERUSALEM (JTA) — Palestinians delayed protesting at the Gaza border fence on Tuesday afternoon as funerals for the at least 58 victims of the previous date’s violence took place.

Some 50,000 Palestinians protested at the border on Monday.

The Hamas terrorist organization, which runs the Gaza Strip, on Tuesday closed protest tents near the Gaza border and called on civilians to not protest, Haaretz reported.

Protests could still take place later Tuesday, following the funerals, according to reports. Israeli troops are prepared for more violent protests, the Israel Defense Forces said in a statement.

“We have prepared for this in the last three weeks,” said Lt. Col. Motti Sahar, logistics officer of the Gaza Division, in a statement.

Tuesday’s delayed demonstrations could grow since May 15 is the annual observation of Nakba Day, or Catastrophe Day, which mourns Israel gaining statehood and the displacement of the Palestinians. Nakba Day was to be observed and protested on Monday this year, as part of the Great March protests and to coincide with the dedication of the U.S. Embassy in Jerusalem.

Violent protests also could take place in Jerusalem and the West Bank, the IDF warned.

The United Nations Security Council was expected to hold an emergency session on Tuesday to discuss responses to the Gaza border fence clashes. The United States is expected to veto any one-sided resolutions against Israel regarding the clashes, according to Israeli media.

The European Union in a statement issued on Tuesday called for “restraint” on both sides. Tuesday’s statement regarding the violence on the border with Gaza differs from previous statements on protests at the Gaza border by specifically mentioning the terror group Hamas.

“We expect all to act with utmost restraint to avoid further loss of life. Israel must respect the right to peaceful protest and the principle of proportionality in the use of force. Hamas and those leading the demonstrations in Gaza must ensure that they remain strictly non-violent and must not exploit them for other means,” said E.U. High Representative and Vice-President Federica Mogherini.

Mogherini called for a two-state solution to the Israel-Palestinian conflict. “In this moment, wisdom and courage would be needed to go back to negotiations for a political solution, for the sake of both the Israeli and the Palestinian people, and the entire region,” she said.