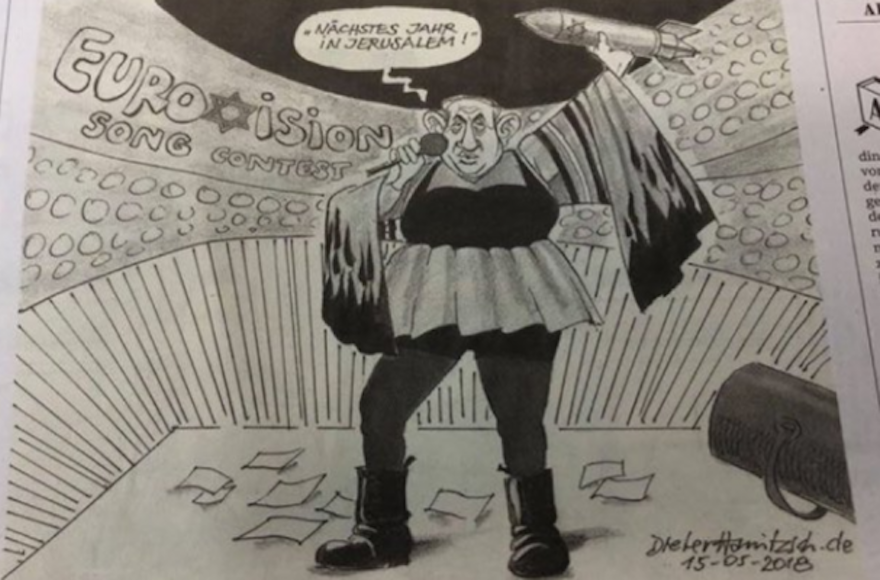 BERLIN (JTA) — One of Germany’s top daily newspapers has pulled and apologized for a cartoon that criticizes Israeli Prime Minister Benjamin Netanyahu.

The image depicted Netanyahu dressed as Netta Barzilai, the Israeli singer who won the Eurovision song contest earlier this week. In the cartoon, Netanyahu is holding a rocket marked with a Star of David. The artist, Dieter Hanitzsch, also replaced the “V” in a Eurovision banner with the six-pointed star.

Netanyahu is shown saying “Next year in Jerusalem,” a reference to the fact that Israel will host Eurovision next year since it won this year.

Wolfgang Krach, editor in chief of the Süddeutsche Zeitung, said in a statement Tuesday that it could be seen as anti-Semitic. The Israeli leader is given an oversized nose, ears and lips in the image.

The Jewish star on the rocket could also suggest that “behind every war, Jewish interests are hiding,” Jonas Mueller-Töwe commented in an article for t-online.de news, which broke the story and reprinted the offending cartoon.

“This led to discussions both within and outside the SZ editorial offices,” Krach said. “The cartoonist … said he merely wanted to point out that next year’s contest will be held in Israel. But … one can also see it differently, and it could be considered anti-Semitic. Thus it was a mistake to publish it, and we apologize.”

The newspaper later announced that it had ended its decades-long collaboration with the cartoonist.

Hanitzsch was criticized in 2016 for another cartoon which used an octopus strangling the earth as a metaphor for U.S. foreign policy. For some critics, the image too closely resembled anti-Semitic illustrations from the Nazi-era propaganda tabloid “Der Sturmer.” Hanitzsch vehemently denied that his intent was anti-Semitic and insisted that the octopus symbol was a reference to “Der Sturmer.”