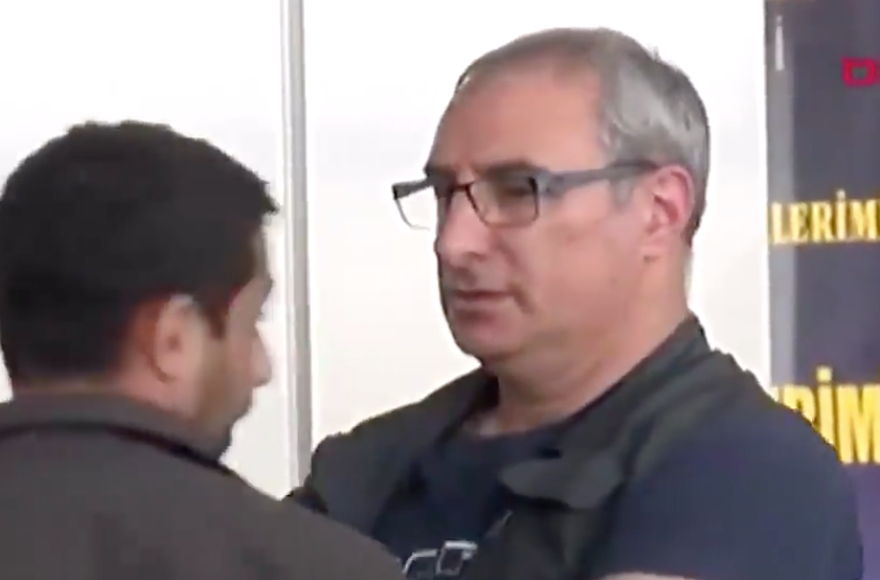 Israeli Ambassador to Turkey Eitan Naeh was subjected to a strict security screening at the Istanbul airport before he could board a flight for Israel. (Screenshot from TRT Haber)
Advertisement

JERUSALEM (JTA) — Israel’s ambassador to Turkey, who was ordered expelled from the country in response to the violence on Israel’s border with Gaza, was subjected to a strict security screening while boarding a flight home.

In response, Israel’s Foreign Ministry summoned a Turkish diplomat and subjected him to an inspection of his diplomatic papers and a hearing.

Both Wednesday incidents, considered humiliating by diplomats, were filmed by journalists who were invited in advance to cover the dressing-downs.

Foreign Ministry spokesman Emmanuel Nahshon told Ynet that Israel “views the incident that took place this morning at the airport very gravely. It cannot be that Israel’s ambassador to Ankara is humiliated at the Istanbul airport, and in the presence of media that was brought there intentionally. This is something that must not happen between countries that have diplomatic ties. Because of that, we summoned the Turkish official.”

Israeli Ambassador Eitan Naeh on Tuesday was summoned by Turkey’s Foreign Ministry and told that it would be “appropriate” for him to return to his country “for a while.” He was subject to a strict security screening, including being frisked and ordered to remove his shoes, at the Istanbul airport before he could board a flight for Israel. His hands also were inspected for traces of explosives, according to a report.

“This was an intentional humiliation,” an Israeli official told Ynet. “The journalists were invited to the airport and taken into the sterile area of a Turkish Airlines flight, where security checks are done right before boarding.”

Hours later, the Turkish charge d’affairs in Tel Aviv, Umut Deniz, was summoned for a “dressing down,” the Foreign Ministry announced. He was asked to hand over his passport and all of his diplomatic documents were scrutinized, according to reports.

The incidents of humiliation come two years after the countries’ exchanged ambassadors for the first time in more than five years.  Relations between Israel and Turkey broke down in the aftermath of the Mavi Marmara incident in May 2010, when Israeli commandos killed nine Turkish citizens in clashes on a boat attempting to break Israel’s blockade of the Gaza Strip. Turkey recalled its ambassador from Tel Aviv in September 2011 and expelled the Israeli envoy.

Naeh was named ambassador to Turkey in 2016, after Israel paid $20 million in compensation to the families of the Mavi Marmara victims, and apologized for the deaths.