Most Israelis supported their army in the 2014 Gaza conflict. Do they feel the same about this week? 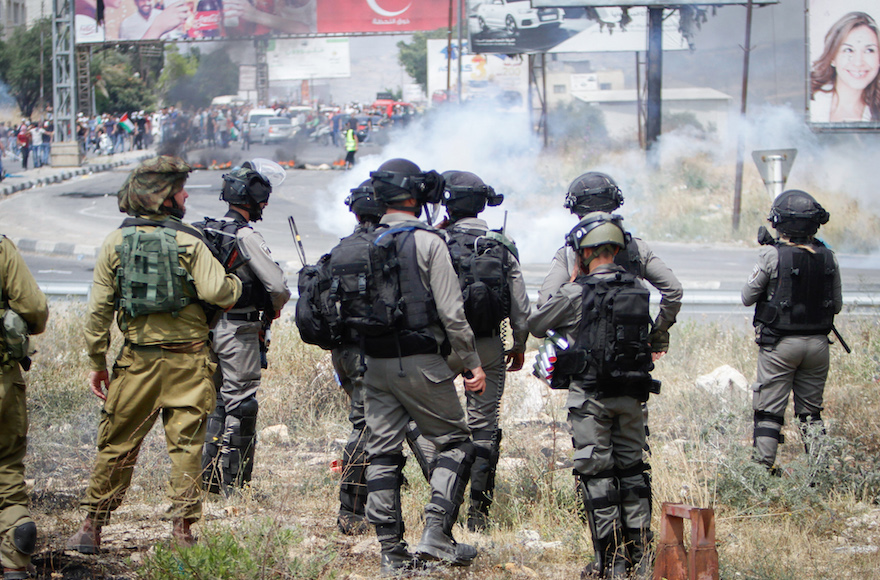 Israeli security forces during demonstrations near the Hawara checkpoint, south of the West Bank city of Nablus, May 15, 2018. (Nasser Ishtayeh/Flash90)
Advertisement

(JTA) — This week has been a tough one for Israel in terms of public relations.

Palestinians have been protesting for weeks on the Gaza border, but the situation heated up on Monday, when the Israeli military shot at protesters, killing at least 60 people and wounding 2,000.

The actions drew wide criticism from world leaders, human rights organization and some within the American Jewish community, though the U.S. blamed the escalation and deaths on Hamas. Israel said it was acting in self-defense and showed evidence that many of those killed were Hamas operatives.

But how does the Israeli public feel about the violence and their military’s response?

Although there are no polls yet, experts predict that responses would be similar to those of the 2014 Gaza War: overwhelming support for Israel’s actions.

Around 80 percent of Israelis supported Israel’s actions in that war, said Dahlia Scheindlin, a Tel Aviv-based public opinion expert. Scheindlin is a policy fellow at the progressive Mitvim — The Israeli Institute for Regional Foreign Policies and a founding writer of +972 magazine, a left-wing publication.

“I think the large majority of Israelis right now are probably looking at this the way they would look at a war, and the way that they look at a war is that they rally around Israeli policies and the army,” Scheindlin told JTA on Wednesday, adding that Israelis were likely not “particularly moved by the deaths of dozens of Palestinians.”

People running from tear gas at the border fence with Israel in Gaza City, May 15, 2018. (Spencer Platt/Getty Images)

Those supportive of the Israel Defense Forces’ handling of the protests include many on the right and center, who make up about 55 and 30 percent of Israeli Jews respectively, according to Tamar Hermann, the academic director of the Guttmann Center for Public Opinion and Policy Research at the Israel Democracy Institute.

Those on the right support Israel’s actions because they see the protesters as a real security threat backed by Hamas, Hermann told JTA.

“People on the right think that Israel has successfully defended its border against people who tried to cross the border and actually interfere with its sovereignty,” she said.

On Wednesday a Hamas official said that 50 of those killed belonged to the terrorist organization. That strengthens the view on the right in support of the army’s response, Hermann said.

Centrist Israelis might be more critical of the kind of force used by the army and more supportive of improving the conditions in Gaza than those on the right, but both groups remain supportive of the army’s actions, she said.

Meanwhile many on the left, which represents about 15-20 percent of Israeli Jews, are critical of the methods used by the army and believe the protesters as motivated by difficult living conditions rather than just wanting to support Hamas, she said.

“On the left, people think even if Israel has the right to defend its border, and even if the strong reaction by the military was in a way justified, they shouldn’t have used the kind of ammunition that they used against the people,” she said.

Arab Israelis tend to side with the Gazans, Hermann added. Indeed, the April poll found that 90 percent of Israeli Arabs did not support the use of live fire against the protesters.

Hermann predicted that if the casualties in Gaza do not rise, Israelis will see Netanyahu’s actions overall this month as positive, due to recent events such as the successful Israeli strike on an Iranian military installation in Syria, Trump’s decision to exit the Iran nuclear deal and the U.S. Embassy move.

“Even on the left people are quite positive that he managed to get these achievements,” Hermann said.

Steven Mnuchin, U.S. Secretary of the Treasury, and Ivanka Trump, daughter of President Donald Trump, revealing a dedication plaque at the official opening ceremony of the U.S. Embassy in Jerusalem, May 14, 2018. (Yonatan Sindel/Flash90)

Scheindlin noted that a 2017 poll she designed for Gisha — Legal Center for Freedom of Movement, an Israeli human rights organization, found that two-thirds of Israelis believe the land, air and sea blockade of Gaza has undermined security. Sixty-eight percent say improving living conditions there is in Israel’s interest. However, many of these concerns go out the window in times of conflict, Scheindlin said, which might explain public support for aggressive military action.

“When it comes to a situation of military threats, nobody wants to break ranks,” she said, “and not because they would be embarrassed to, but that’s when people’s patriotism goes up.”