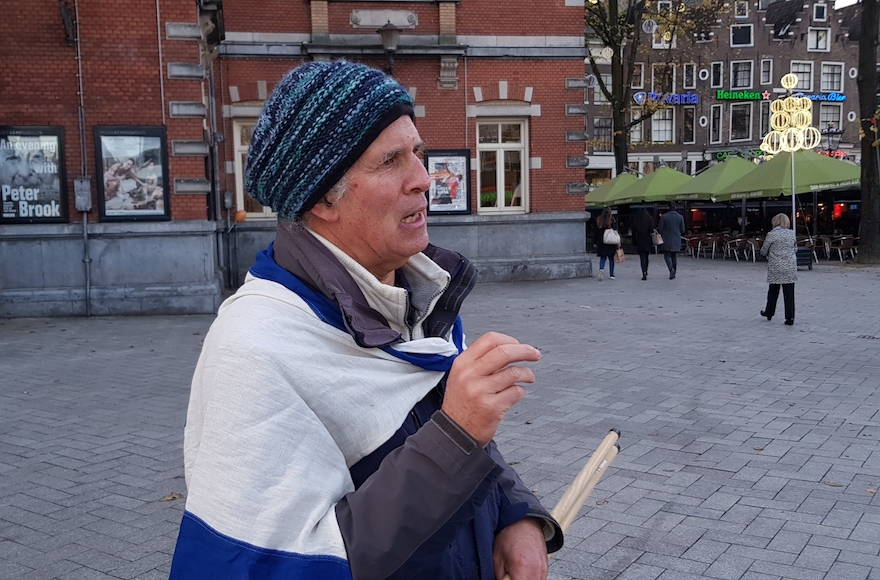 AMSTERDAM (JTA) — On one of the Dutch capital’s busiest squares, a middle-aged Jewish man draped in an Israeli flag bellows insults at another man holding a Palestinian flag and posters promoting a boycott of Israel.

The shouting startles a woman buying a herring sandwich from a food truck parked between the men on Leidse Square on a recent Friday.

“Don’t worry about him, love, he’s harmless,” the vendor tells her of Michael Jacobs, the man wearing the Israeli flag.

Jacobs is retired motivational speaker and photographer who has devoted the past two years of his life to picketing and heckling activists from the Boycott, Divestment and Sanctions movement.

He may appear harmless to Jacobs to passersby, but he is giving fits to the Dutch BDS movement. He got the city to curtail some BDS activities in Amsterdam’s main square and ended their monopoly on the street-level Israel debate.

These achievements have turned Jacobs into something of a hero among some Dutch supporters of Israel.

Since 2016, police have detained Jacobs a dozen times. In September that year, he was fined for disturbing public order and spent six days in jail because he refused to promise the judge that he would stop picketing BDS activists on Dam, Amsterdam’s main square and home to its best-known monument for the victims of the Nazis during World War II. 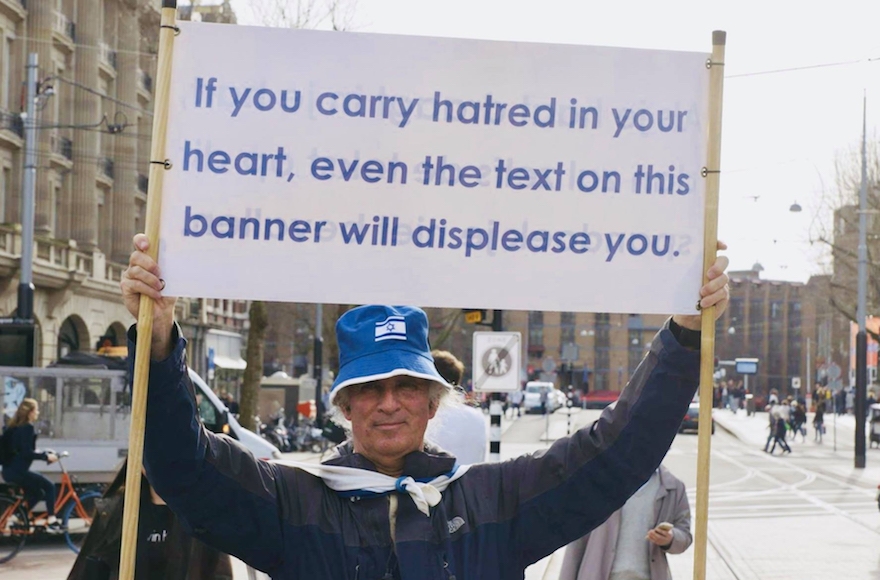 Michael Jacobs, shown in Amsterdam in April 2017, has been detained by police around a dozen times. (Courtesy of Jacobs)

“I’m a law-abiding citizen,” Jacobs said. “So why should I agree to such a demand? No law forbids me from standing next to Simon Vrouwe and the other anti-Semites,” he said, naming a well-known BDS activist with whom he has clashed frequently — and at whom he shouted insults on Leidse Square.

(Vrouwe dismissed Jacobs’ accusations of anti-Semitism. But Vrouwe also told JTA that he does not think that Jews have a right to their own country “because there is no ‘Jewish People’, only religion.”)

Jacobs’ willingness to cause a scene made him a regular at police stations. But by 2017, it also prompted the city to ban Vrouwe and other BDS activists from standing at the Dam on most weekdays. The BDS promoters are now allowed to stand there only four days a week. Jacobs and other activists regularly confront them at the Dam and elsewhere from a distance of 35 yards, as required by police.

The police and the judiciary’s heavy-handed handling of Jacobs prompted an outcry among Dutch Jews. In November, prosecutors dropped charges against him for causing public disorder. And Amsterdam’s police apologized for detaining him in November for carrying a sign accusing BDS supporters of lying.

In February, it was Simon Vrouwe’s turn to get arrested. Police also confiscated his flyers and fined him about $250 because he was soliciting donations for the BDS movement without the city’s permission.

“As soon as I see them, I grab my kit and I’m off to greet them,” he said of the BDS activists.

Standing alone with the Israeli flag and a banner accusing the BDS movement of anti-Semitism, Jacobs is often exposed to harassment and even violence, he said.

“Sure, there’s the spitting, the screaming and the pulling,” he says, smiling.

The Israeli flag around his shoulders is tied to his jacket but fastened around his neck only with a clothespin so that “when they pull it from behind I won’t get choked,” he said. 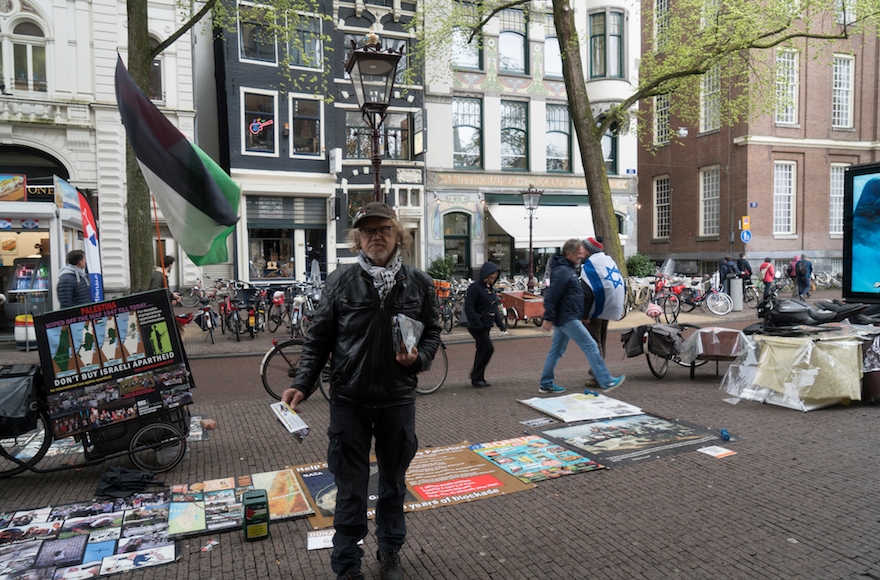 When Jacobs first started coming to the square, he stood there along with a group called Time to Stand up for Israel, which was founded by Sabine Sterk, a non-Jewish woman who lived in Israel as a child because her father worked there for the United Nations.

She told JTA that Jacobs deliberately provoked the BDS activists by standing near them and heckling them. His behavior and the media’s coverage of it — the Het Parool daily devoted a double spread to the fight between pro- and anti-Israel activists on the Dam in 2017 — exposed the group to threats by extremists, leading her and other group members except Jacobs to leave the square.

“It got to a point where, partly because of Michael’s provocations, I felt I couldn’t take the responsibility anymore of standing there with activists I had brought there,” she told JTA. “I think he went too far. He’s a fanatic. I also value his devotion and courage but I think that if he acted more reasonably, it would have helped the cause.”

Jacobs “went further that any of us,” said Sterk, the mother of four children.

Sterk and her group have since returned to the Dam. They come there every week.

Jacobs said he is “not committed to any group — only to truth and justice.”

He also said that his decision not to heed police instructions was a direct lesson from the Holocaust, which his parents narrowly survived.

“In this country, the local police rounded up more than 75 percent of the Jews for the Nazis to murder,” he said — the highest rate of any country in Nazi-occupied Western Europe. “So when the police say go right, I go left. When they say go left, I go right.”

He also acknowledged that he may be traumatized by the Holocaust, like many “second generation” Jews.

Jacobs recounted his maternal grandfather’s legal fight until 1938 to keep his cigar factory near Dresden, Germany from being confiscated by the Nazi government. And, his voice cracking with emotion, he recalled during an interview on Leidse Square how his father was the only one from his nuclear family who survived the genocide.

Oblivious of the legal skirmishes and cat-and-mouse battles between BDS and its opponents, local supporters of Israel and many Israeli tourists are delighted to see Jacobs and his fellow protesters. They often buy the protesters drinks and pose for selfies with them.

“Finally, someone is doing something!” Avishai Ziman, a tourist from Jerusalem, said as he posed with Jacobs on Leidse Square. “Thank you, bro, I come to Amsterdam all the time and see these BDS posters full of lies and I keep wondering why there is nobody speaking for us!”