The ‘#1 fan’ of Israel’s national airline has over 40,000 pieces of memorabilia 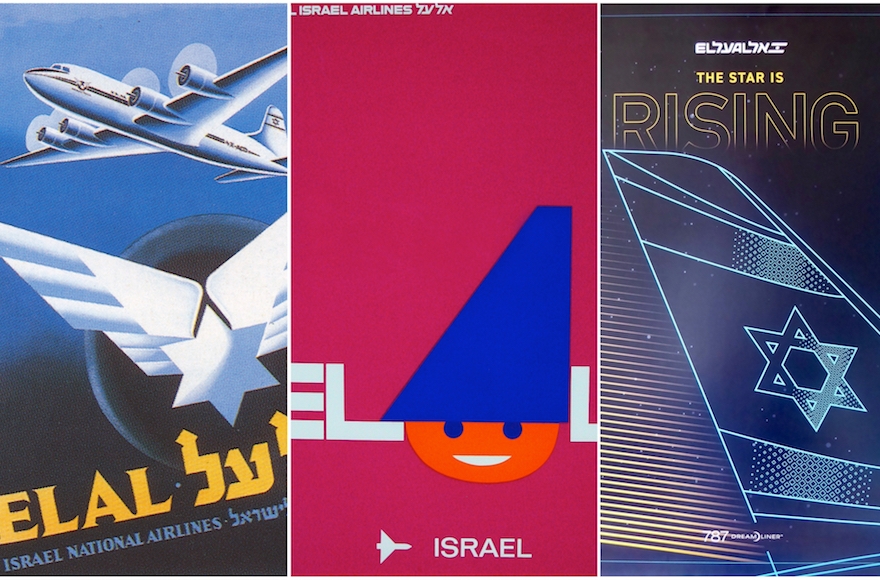 In one room, shelves and tables display scale models of El Al’s earliest aircraft, and its most modern. Elsewhere are flight bags, china, pens, ashtrays, desk flags and other collectibles bearing the El Al logo that Goldman has acquired over the past 40 years. In a large walk-in closet are neatly hung uniforms and caps worn by flight crews from decades past.

“One of my most prized items,” he proudly points out, is the first badge to adorn an El AL pilot’s hat.

In all, more than 40,000 El Al items fill the apartment that Goldman shares with his wife Marilynn. Some people — including some the airline’s employees — aptly refer to him as “El Al’s #1 fan.” 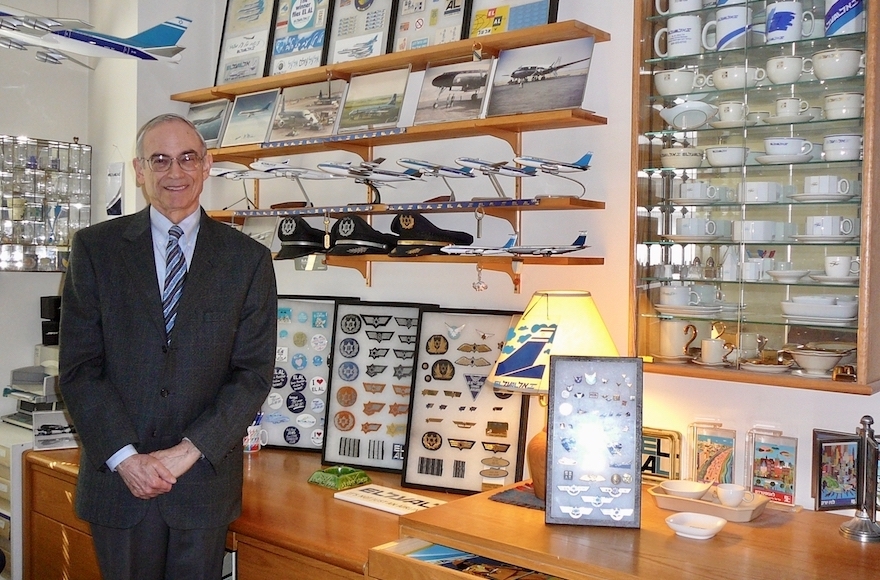 Marvin Goldman, in his New York City apartment, has created a mini museum of El Al artifacts. (Courtesy of Goldman)

During his long career as an attorney for a prestigious Manhattan firm, Goldman flew on various airlines to countries throughout the world. About 100 of those flights were to and from Israel, for business or vacation, all on his favorite airline.

Goldman has likely amassed the largest assortment of El Al’s memorabilia outside of the airline itself. Large cabinets also store hundreds of posters, advertisements, timetables, menus, postcards and historical documents about the airline. Some of the posters were designed for El Al by well-known Israeli graphic designers, such as Franz Kraus and Dan Reisinger.

He communicates with other airline memorabilia collectors worldwide, attends airline enthusiast shows and has been helped by past and present El Al personnel who recognize the motivation behind his obsession: to “protect and preserve El Al’s dramatic and unique history for the benefit of future generations.”

He adds that “people can be divided into two categories — the ‘thrower-outers’ and the collectors.”

“I’m a collector, but a collector with a purpose. I began saving El Al memorabilia following my first trip to Israel in 1978 and have been doing it ever since,” Goldman said. “It started with collecting airline postcards. I joined the World Airline Historical Society, and by attending their annual conventions, I learned that El Al memorabilia was especially hard to find. I took up the challenge of finding and collecting the airline’s material and preserving it.”

Goldman says that he acquired his massive memorabilia inventory from a variety of sources, including other airline enthusiasts, airline memorabilia shows, El Al personnel (who shared their duplicates with him), and other travelers and retired El Al employees who wanted a good home for items they had saved. He acquired a small fraction of his collection through online auction sites like eBay.

Some of the items in his home are so unusual that even El Al was not aware of their existence. He maintains thousands of photographs and computer images that trace the airline’s history and serve as historical research sources. Included are black and white prints of El Al’s very first airliner and flight crew; photos depicting the mass ingathering of immigrants to Israel from Yemen, Iraq, Ethiopia, the Soviet Union and elsewhere; and crew members of the El Al plane that flew the notorious Nazi Adolf Eichmann from Argentina to Israel in May 1960 to stand trial for his war crimes. 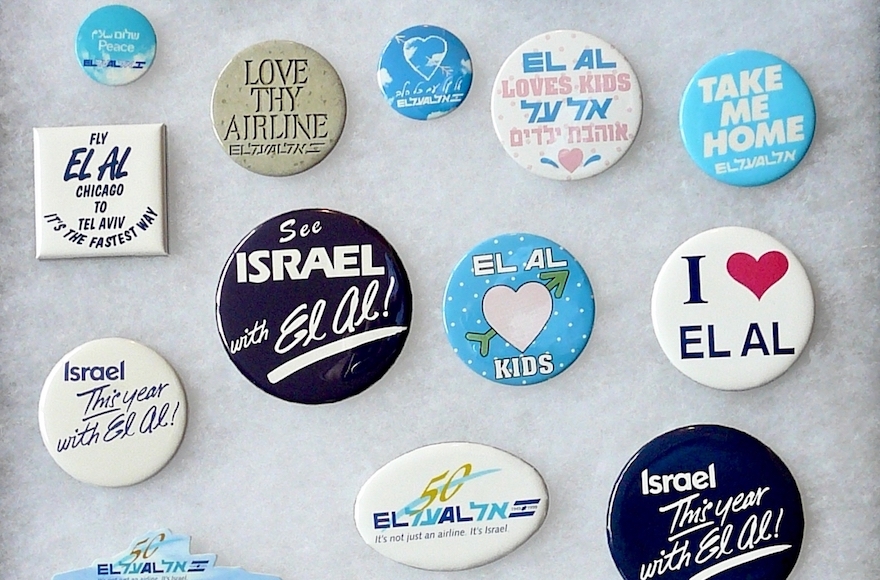 The retiree’s collection serves as a source of information to museums, libraries and even to the airline itself. Some beneficiaries have included the Israel National Library and Israel Museum in Jerusalem, the Jewish Museum in Manhattan, Harvard University’s Widener Library, the El Al Moreshet Archive at Ben-Gurion Airport and the Eretz Yisrael Museum in Tel Aviv.

Items from his collection also have appeared in books, movies and documentaries. The El Al uniforms in the 1996 movie “The Man Who Captured Eichmann,” which starred Robert Duvall, were made with the help of images in Goldman’s stash. For a recent German documentary on the history of the bagel, Goldman provided images of the bagel and lox breakfast service introduced by El Al in the 1960s on flights out of New York, and the airline’s related booklet, “EL AL Looks Into the Bagel.”

He is considered to be an unofficial historian for Israel’s airline and is often called upon to lecture before appreciative audiences. Because 2018 marks the milestone 70th anniversaries of both Israel and the airline —  whose inaugural flight from Geneva to Tel Aviv took place in September 1948 — Goldman’s collection has drawn greater interest this year. One recent lecture in central New Jersey attracted over 200 people.

Sheryl Stein, who is the manager of advertising, public relations and social media for El Al, often refers historical inquiries from curious travelers and researchers to Goldman.

“Marvin has been a valuable source of information and images for us. He is one of our favorite frequent fliers,” she said. 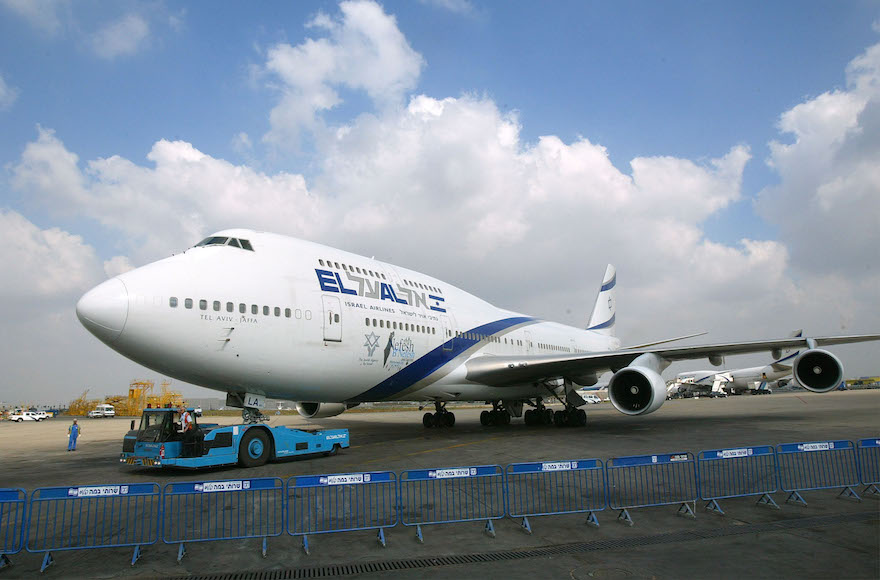 El Al was born in 1948 out of necessity. Shortly after Israel’s war for independence, the country’s first president, Chaim Weizmann, was in Geneva, and the Israeli government wanted to transport him home in an Israeli aircraft so that he could be officially sworn into office. There was a problem, however: Israel did not have a civil aircraft suitable for a trip of that distance, and the Swiss barred Israeli military aircraft from their country.

Employing typical Israeli ingenuity and some chutzpah, Israel converted a four-engine DC-4 “Skymaster” plane into the first civilian aircraft registered in Israel. They named the new airline El Al, meaning “to the skies”— a phrase taken from the Biblical book of Hosea. The crew was selected from among the foreign aircrew volunteers who were serving in the transport arm of its War of Independence (a group called the “Mahal”).

“Frequent fliers generally accumulate miles, points or other perks, but my fascination with El Al did more,” Goldman said. “It helped to create a new avocation for me — developing an exciting and different type of collection that would preserve the linked heritage of El Al and Israel.”