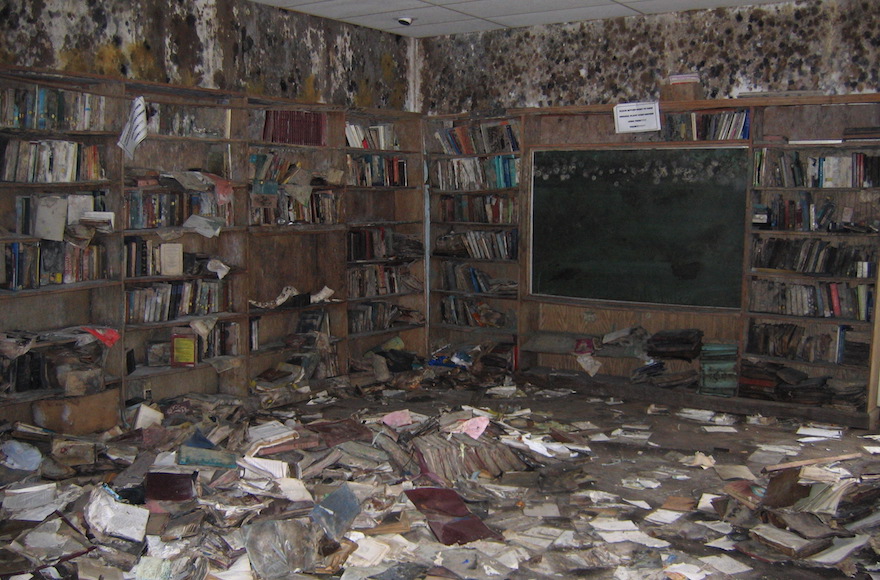 (JTA) — As the president of her New Orleans Orthodox congregation in 2005, Jackie Gothard oversaw the burial of seven Torah scrolls ruined by flooding from Hurricane Katrina.

Then she made sure her synagogue would be reborn.

The first female president of Beth Israel in the Lakeview section of New Orleans, Gothard was in office when Katrina struck. She recalled burying the  Torah scrolls in a story she recounted 10 years later for The My Katrina Story project, a multimedia partnership of the Loyola University School of Mass Communication, the Center for the Study of New Orleans and NOLA.com/The Times-Picayune.

Some 150 people attended the burial in a cemetery plot of the Torah scrolls.

A year later, a girl named Hayley Fields from Los Angeles, who for her bat mitzvah project sold plastic watches for $5 each to raise money for a refurbished Torah, brought the new scroll to the synagogue on the first anniversary of Katrina.

“It was amazing. All around us church bells were ringing [to mark the anniversary],” Gothard recalled for the My Katrina Project story. “We had klezmer music and were dancing in the street outside Gates of Prayer with our new Torah. Four additional refurbished Torahs were donated. Each one that came was amazing. It was such a celebration for Beth Israel.”

Gothard guided the building of Beth Israel’s new home in suburban Metairie alongside the Reform synagogue Congregation Gates of Prayer.

The New Orleans-based Crescent City Jewish News called Gothard the “primary author of the then-101 year-old Orthodox congregation’s recovery.” Gothard was the first to meet with the Gates of Prayer rabbi and administrator to discuss relocating next door to the Reform synagogue and, the newspaper said, “it was Gothard who rallied the dispersed members, suggesting a comeback from such a tragedy was possible.”

She also traveled to Milwaukee to meet with representatives of the Orthodox Union to express her congregation’s desperate plight and seek financial assistance. She returned home with a six-figure contribution from the umbrella group to help in the recovery effort.

Gothard was a social worker for Child Protective Services at the New Orleans Department of Welfare, and later worked as a travel agent specializing in trips to Israel. She also led six-week teen tours of Israel for six years.

Gothard was involved in Hadassah, Jewish Family Services — she was active in the Teen Life Counts suicide prevention program — the Jewish Federation of Greater New Orleans and the Jewish War Veterans of America.

She is survived by her husband of 60 years, Sol; five children; 11 grandchildren and one great-grandson; and a sister.