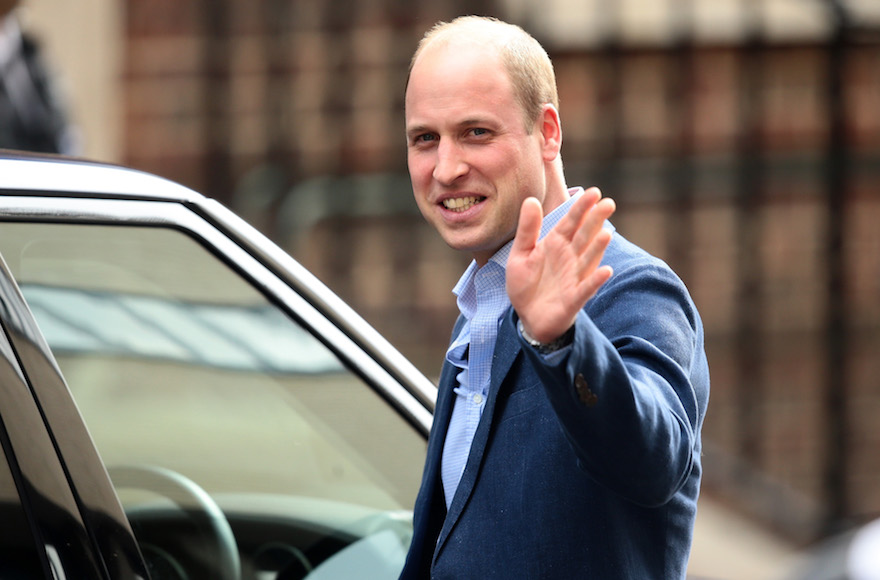 (JTA) — Prince William will come to Jerusalem at the end of June, the British royal family said, during the first visit to Israel by a senior British royal.

The announcement Friday about the visit sometime between June 24 and 28 was the first confirmation that William, whose official title is the Duke of Cambridge, will visit the Israeli capital, according to a report by The Associated Press.

The visit to Israel, Jordan and the Palestinian Authorities was announced in March, but it did not contain specific dates or mention Jerusalem. It did say that the prince’s visit “is at the request of Her Majesty’s Government and has been welcomed by the Israeli, Jordanian and Palestinian authorities.”

William will also visit Tel Aviv, according to the report Friday.

In Jordan, he will go to Amman and Jerash, and in the Palestinian Authority he will visit Ramallah, the seat of the government in the West Bank.

Like most of the world, the United Kingdom does not formally recognize Jerusalem as Israel’s capital, pending the resolution of peace talks with the Palestinians, whose leaders also claim Jerusalem as the capital for their future state. The British foreign office’s official map of Israel lists no capital, describing both Jerusalem and Tel Aviv as an “administrative center.” Unlike the March statement about William’s arrival, the Foreign and Commonwealth Office refers to the West Bank and the Gaza Strip as “occupied Palestinian territories,” or OPT.

Earlier this month, the United States, Guatemala and Paraguay moved their embassies to Jerusalem from Tel Aviv and recognized Jerusalem as Israel’s capital. In December, President Donald Trump made the decision to move the embassy, and the Latin American countries followed suit. The European Union, of which the United Kingdom is a founding member, has condemned the transfer as damaging to peace efforts.

No senior member of the Royal House has visited Israel in their official capacity in what many observers believe is a policy adopted following the Zionist movements’ use of violence against British nationals when the United Kingdom ruled the Mandate on Palestine – an area comprising modern-day Israel, Jordan and the Palestinian Authority.

Whereas members of the British royal family, including Queen Elizabeth, have made state visits to Kenya and other countries where acts perceived as terrorism were committed against Britain and its citizens by anti-colonialist combatants, they have stayed away from Israel in their official capacity since the country was established in 1948.

In March, Prime Minister Benjamin Netanyahu of Israel said in a statement: “We welcome the announcement on the arrival of Prince William to Israel. This is a historic visit, the first of its kind, and it will be greeted here with great affection.”