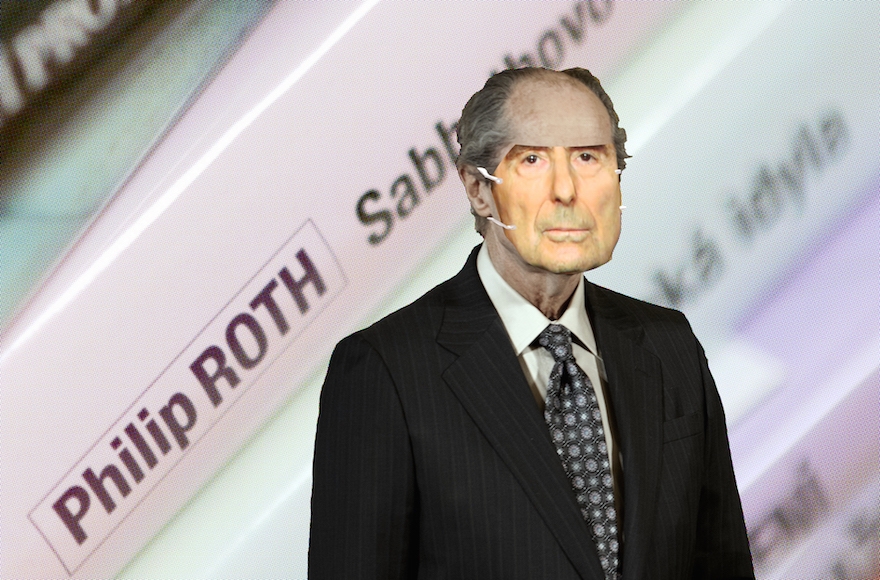 AMHERST, Mass. (JTA) — Philip Roth lent to American literature a singular, unapologetic voice to which nothing was sacred. His fiction critiqued everything from fascism to Jewish bourgeois assimilation to political puritanism to Jewish boyhood to the Israeli-Diaspora dynamic. His early work seemed to be evidence that a Jew could write the great American novel.

When Roth died last week at 85, he left to American literature more than 30 books, each one containing a different blend of humor, wit, irreverence, pathos and trenchant social commentary. But he gave us even more than this. He gave American literature an unforgettable character: himself.

Enter Philip Roth, who not only exemplified this burgeoning writer type but himself built upon these characterizations, turning the critics’ sketches into a full-color portrait. He achieved this primarily through the use of his writerly alter ego — the Newark-born, University of Chicago-educated Nathan Zuckerman, who shares Roth’s demographics and many of his biographical facts.

Zuckerman, introduced in “The Ghost Writer,” both bears the burden of — yet also wishes to escape —  the past (whether it be the Holocaust, the experience of first-generation immigrants or the Jewish writers who came before). He is caught in the double bind of being alienated from his Jewishness because of his Americanness and alienated from his Americanness by his Jewishness; he is a hypochondriac obsessed with his own mortality; he is a philanderer who perceives a link between his sexual virility and writerly productivity, and often struggles with both.

Roth’s work goes to great lengths to encourage readers to conflate the real Roth with his fictionalized alter egos. In many cases, he even reinforces this (known as the biographical fallacy) through the very act of seeming to reject it. In “The Anatomy Lesson” and “The Counterlife,” Zuckerman responds to family, friends, acquaintances and literary critics who attack him on the basis that he and his protagonists — especially “Carnovsky,” who bears a close resemblance to Roth’s infamous creation Alexander Portnoy — are one and the same. “The Anatomy Lesson” includes a cutting portrait of one Milton Appel, who writes an essay similar to the one Irving Howe published after the release of “Portnoy’s Complaint” complaining that Roth was “foolish” for trying to escape the claims of Jewish distinctiveness.

Through this and numerous other brilliant metafictional sleights of hand (the entire novel of “Operation Shylock,” for instance, in which a narrator named “Philip Roth” confronts someone pretending to be Philip Roth), Roth blurred the lines between himself and the fictionalized versions of himself to such an extent that he turned himself into a literary character. The success of this fictional project is evident in works by other writers. In Adam Levin’s mammoth 2010 novel “The Instructions” and Sam Apple’s brilliant 2015 short story “The Butcher of Desire,” for instance, Philip Roth appears as not only a major influence on content and form, but as a character within the fiction.

Similarly, in Elisa Albert’s “Etta or Bessie or Dora or Rose” (2004), Albert contends with Roth’s legacy. On the one hand, she tips her proverbial hat to it as she writes, in traditional Rothian style, from the perspective of a writer alter ego also named Elisa Albert (“a lobotomized Philip Roth writing chick lit”). On the other hand, she rails at it as she confronts Roth’s misogyny and questions how to go about being a Jewish American woman writer in the wake of Roth’s gendered dominance over the type.

Lisa Halliday, too, confronts this difficult dynamic in her recent critically lauded novel “Asymmetry,” in which a young female literary agent (modeled, of course, after Halliday herself) has an affair with a thinly veiled Roth.

These Roth characters — these “ghost writers” — can be found on the stage and screen as well. In Daniel Goldfarb’s play “Legacy,” which was staged in 2015 at the Williamstown Theatre Festival, a neurotic, philandering Jewish writer (whose oeuvre includes novels about a Zuckerman-like writer character and a shockingly sexual, “Portnoy”-esque novel called “Foreskin”) turns to fatherhood as a substitute for a failing literary legacy. And in Alex Ross Perry’s indie film “Listen Up Philip,” whose plot mirrors that of “The Ghost Writer,” the protagonist, played wonderfully unappealingly by Jason Schartzman, is modeled on a young Philip Roth.

To write about Philip Roth, to put him into various fictional situations, has become a worthy niche within contemporary fiction. Roth may be gone, but if the past decade is any indication, readers can expect to continue to come across him in a context they know and love: in fictionalized form, within the pages of novels and stories.

(Miranda Cooper is a fellow at the Yiddish Book Center.  She is culture writer and book reviewer, whose work has appeared in Tablet, Alma, Jewish Currents and the Jewish Book Council.)

Philip Roth showed me how to be an American Jew