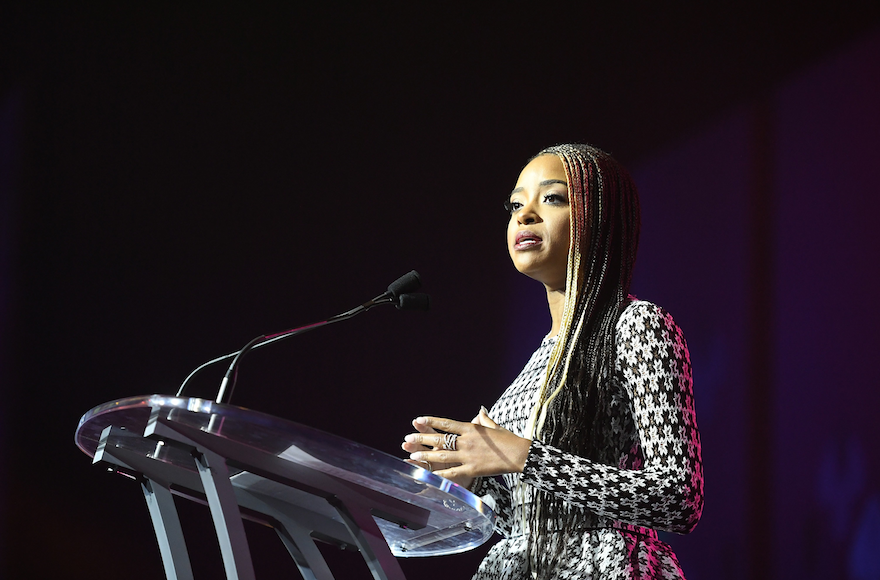 (JTA) — An Australian social service agency canceled an appearance at its annual conference by Women’s March co-president Tamika Mallory, saying it did not want her recent remarks on Israel to “overshadow” the meeting.

Mallory was to serve as the keynote speaker next week for the Victorian Council of Social Service “Good Life” summit in Melbourne, The Australian newspaper reported.

Jewish groups in Australia expressed concern about Mallory’s appearance due to her recent comments on Israel and tweeted support of Nation of Islam leader Louis Farrakhan, a known anti-Semite. Mallory has posted a photo of herself with Farrakhan on social media and attended a speech in which he repeatedly attacked Jews.

Mallory in a video address Friday to the Centre for Constitutional Rights in Manhattan, which sponsored her trip to Israel, called the establishment of Israel in 1948 a “human rights crime.” She recently traveled to the area with an organization that met solely with Palestinians and pro-Palestinian activists.

“It’s clear you [Israelis] needed a place to go — cool, we got that. I hear that,” she said. “But you don’t show up to somebody’s home, needing a place to stay, and decide that you’re going to throw them out and hurt the people who are on that land. And to kill, steal, and do whatever it is you’re gonna do to take that land. That to me is unfair. It’s a human rights crime.

“My soul would not rest, standing by and doing nothing about it, to know that the U.S. government – my taxpayer’s money, $10 million a day – is going to a government, a military, that takes the lives of people who were there first.”

In talking about withdrawing the invitation to speak at the summit, a spokesman for the Victorian Council of Social Service told The Australian that “VCOSS is concerned both by comments Ms. Mallory made in recent days regarding Israeli-Palestinian affairs, and the capacity for these remarks to overshadow the Good Life Summit. The Good Life Summit is about setting a positive vision for a fair and just Victoria. … We don’t want anything to detract from that vision.”

In April, Mallory attacked Starbucks for including the Anti-Defamation League among its advisers on bias. In a tweet she accused the Jewish group of “constantly attacking black and brown people.”

In February, she sparked an outcry when she posted a photo of herself and Farrakhan on Instagram following his Saviours’ Day speech in Chicago, during which he declared that “powerful Jews are my enemy” and that he had “pulled the cover off the eyes of the satanic Jew.”