In Jerusalem, backgammon becomes peacemaker between Jews and Arabs 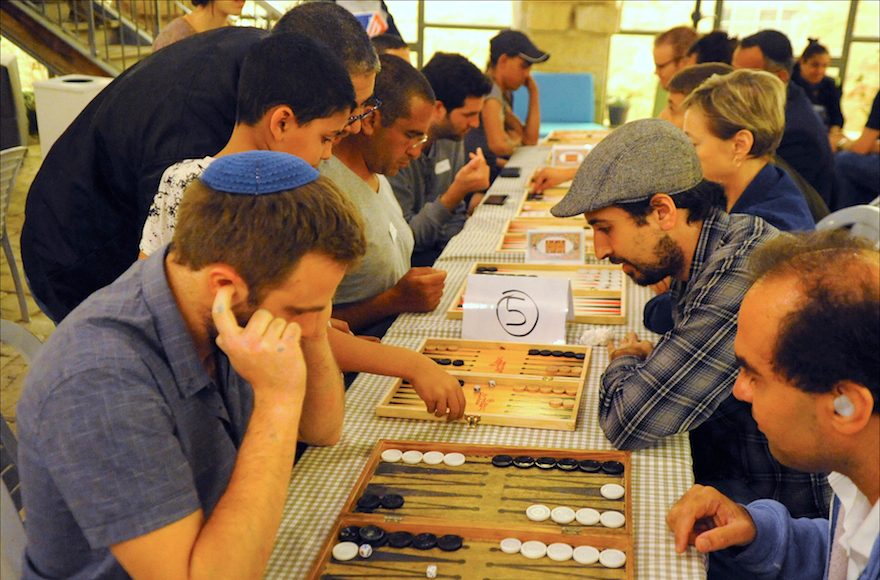 JERUSALEM — On a balmy evening recently, Arabs and Jews trickled into a leper colony in a leafy neighborhood in Jerusalem, the pulsating rhythms of music by DJ Ramzy echoing off stone walls.

The Jews, Muslims and Christians who filled a large room here hadn’t come to seek cures for a biblical disease. (The leper colony long ago was emptied and is now a municipal art and design center called Beit Hansen.)

Rather, the assembled had come for something much more important: backgammon.

They appeared to be from backgrounds as diverse as Jerusalem itself: a Jewish boy sporting a Captain America kippah, a working-class Arab man, an elegant blonde woman in her 60s, a bespectacled Arab boy no older than 10, a yeshiva educator from a Yemenite family.

With music blaring from loudspeakers, the competitors squeezed together at long tables and hunched over backgammon boards, their brows scrunched in concentration.

“This is not a competition between enemies. We just want to come and play,” said Matan Hayat, 28, a religious school teacher in this city’s Katamon neighborhood. “Here we have leftists, right-wingers, Orthodox Jews and Arab Muslims. We have all become friends.”

The backgammon competition, Jerusalem Double, is the brainchild of Kulna Yerushalayim, a group that seeks to bring together Jews and Arabs in Israel in nonpolitical, non-hostile settings.

Zaki Djemal, a London-born Israeli entrepreneur, founded the effort together with a group of friends seven years ago with group singalongs of Arabic and Hebrew songs. Nowadays, Kulna Yerushalayim — Arabic for “We are all Jerusalem” – runs everything from backgammon competitions to Arabic-language tours of western Jerusalem landmarks like the Israel Museum and Mahane Yehuda market for Arab Jerusalemites who have never explored many Jewish parts of the city.

“So far, more than 6,000 people have come to our events, and there’s an even broader following online,” said Djemal, a 30-year-old Harvard graduate who studied behavioral economics.

Backgammon is an ideal game for bringing Jews and Arabs together, Djemal says. Known in both Arabic and Hebrew as shesh-besh, the game long has been a staple of Middle Eastern culture.

“In Israel, backgammon resonates with a lot of people because it’s so well-known and everyone has a backgammon story,” Djemal said. “Maybe their grandfather taught them, or they learned in miluim [army reserves].

“On the Arab side, it’s been around for years. It’s a game of the Middle East. It speaks to people. It’s super accessible, it’s fun, it’s engaging, and it offers a way to engage Jews and Arabs in a refreshing, nuanced way.”

Kamel Jabarin, a 34-year-old youth leader from eastern Jerusalem’s Shuafat neighborhood, is also part of the Kulna team and has been working on Arab-Jewish projects for nearly a decade. When Arab-Jewish tensions increase – as they have recently — the need for collaborative activities like these grows, he said.

“Sometimes we do talk about politics; it’s not that nobody talks about it,” Jabarin said. “But this is more for friendship. 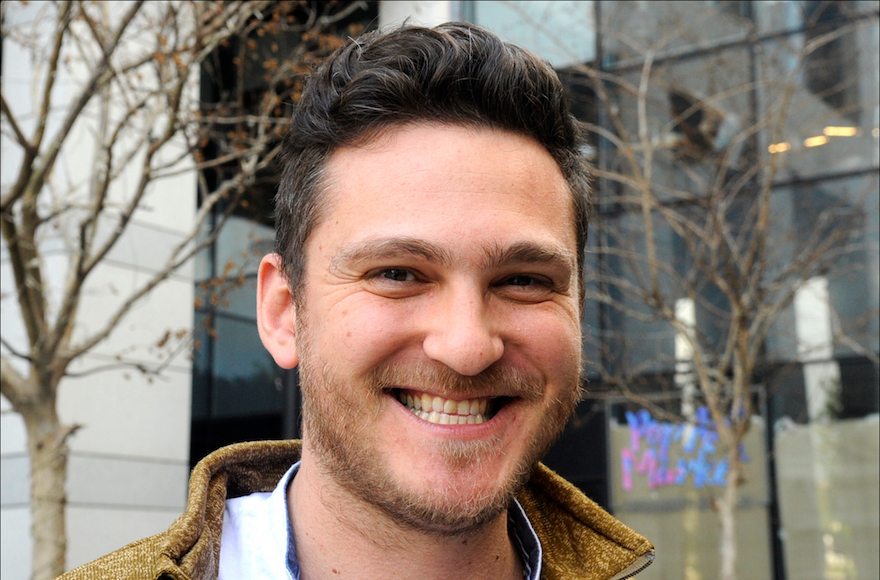 Djemal grew up in Jerusalem and during his military service was a news editor for Israel’s Army Radio. Following a trip to Nepal after his army service, he became active in humanitarian issues. He is involved with Tevel B’Tzedek, an Israeli nonprofit agency that does community development work in Nepal and African countries.

He’s also a member of ROI Community, a network of over 1,300 Jewish activists and innovators who convene under the auspices of the Charles and Lynn Schusterman Family Foundation to advance Jewish ideas and values.

Professionally, Djemal is an entrepreneur, the founder and managing partner of Fresh Fund, which raises venture capital to invest in promising Israeli high-tech.

Kulna Yerushalayim’s events are all free. There have been about 30 backgammon tournaments, which are part competition, part musical performance. Recent headliners have included well-known performers like the Israeli female vocalist Zehava Ben, Arab-Israeli singer Nasreen Qadri and Israeli singer Neta Elkayam, who is of Moroccan origin.

The shesh-besh tournaments have received media coverage from The New York Times to the Cairo Times, and in publications in places as far away as Japan and Pakistan. Financial support comes from Australia’s Pratt Foundation, the Leichtag Foundation, the Jerusalem Development Authority and the Jerusalem Municipality.

The mood was festive at the recent backgammon tournament in Jerusalem. Players joked with one another and onlookers danced to the music while young Arab boys took selfies with their friends.

“Part of the success of our project is that we’ve been able to rally support from across political lines,” Djemal said.

When the group organized a backgammon tournament in an auto garage in a Jerusalem neighborhood near the Arab-Jewish divide, both Jews and Arabs came, Israel’s biggest daily newspaper, Yediot Acharonot, wrote it up, and Prime Minister Benjamin Netanyahu tweeted about it.

But with Palestinian-Israeli relations at a low point, putting together events like these can be challenging. The group had a backgammon competition scheduled the day that President Donald Trump announced he was moving the U.S. Embassy in Israel to Jerusalem, and the Arab participants pulled out.

“We canceled it because our Arab partners said it would be inappropriate to celebrate anything on that day,” Djemal said. “For every small step we make, a statement like that can take us millions of steps back.”

Noa Talel, 30, the Jewish chairwoman of Kulna Yerushalayim’s board, says Jews and Arabs in Jerusalem have dwindling opportunities for positive interactions with each other, making efforts like the backgammon competitions so important.

“Jerusalem is always a sensitive subject and there will always be tensions,” she said. “In fact, this motivates us even more to form stronger bonds between us and the Palestinians.”

This month, as Jerusalem’s Muslims mark Ramadan, Kulna Yerushalayim is passing out dates and water each evening when the fast ends.

In January, the group held a backgammon tournament at the Knesset, organized in cooperation with Arab-Israeli parliamentarian Zouheir Bahloul of the Zionist Union party. Fifteen Knesset members participated; the winner was Likud’s Oren Hazan.

“At the end of the day, people just want to live their lives on both sides,” Djemal said. “The vast majority of people don’t support violence; these are the people we’re working with.

“The Israeli-Palestinian conflict is a huge, massive problem we don’t know how to approach. But when you focus on small victories that can improve relationships on a grassroots level, you see lots of meaningful results.”