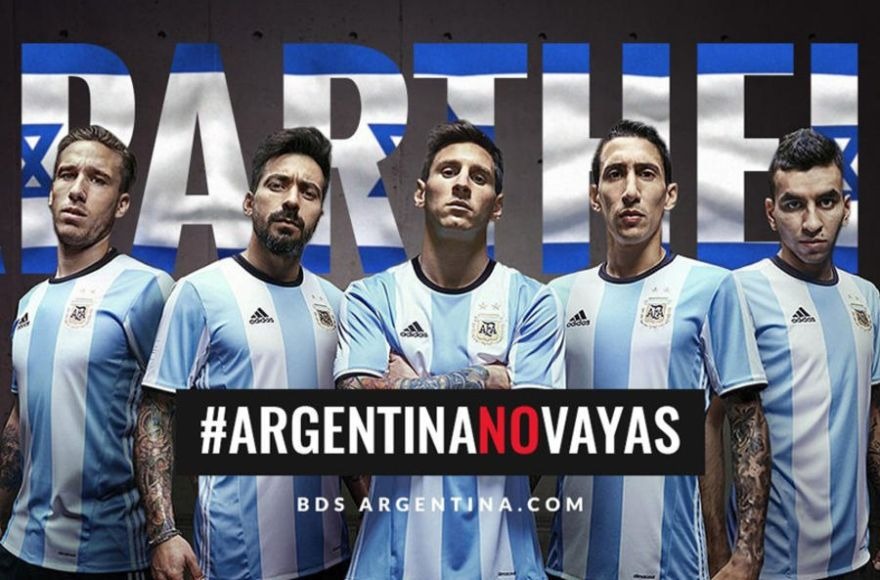 An image circulated by the Boycott, Divestment and Sanctions movement urged Argentina’s national team to cancel a match with Israel. (Facebook)

BUENOS AIRES, Argentina (JTA) — Argentinian and global Jewish institutions decried the cancellation of the friendly match between the national soccer teams of Israel and Argentina.

The match had been scheduled to take place on Saturday in Jerusalem, before being canceled on Tuesday.

“The suspension of this friendly match between Argentina and Israel was not even a negotiation with a group of violent extremists. It was a capitulation,” wrote Argentina’s Jewish political umbrella DAIA President Alberto Indij in a letter to the Argentine Football Association. “Unfortunately not only the opportunity for two friendly countries to offer a show in peace was lost, it also has weakened us profoundly as a nation because it has demonstrated to the whole world that fear can win, without a responsible leadership showing even the slightest resistance. ”

After two months of pressure from the Boycott, Divestment and Sanctions movement against Israel, the Argentinian team’s players announced the cancellation of the match that would be deliver global star Lionel Messi to Israel just one week before his participation in the World Cup in Russia

The Jewish Argentine Federation for Sports and Social Community Centers, or FACCMA, in a statement said it “strongly condemns the fact that violence and threats defeated fair play and an encounter between cultures.” The federation is the largest member of the Latin American branch of the Maccabi World Union, which has 55 affiliates and a network of 50,000 members. “In our Maccabee spirit we will continue to promote respect and are against violence and hate.”

The Wiesenthal Centre`s Director for International Relations, Dr. Shimon Samuels, said that “by kow-towing to terror, Argentine football has set a dangerous precedent and politicized a beautiful game…Neither is boycott appropriate to the football pitch nor is ethnic, religious, or gender defamation. “We are horrified that in this game, threats, intimidation and terror was the winner,” said the Latin American representative of Wiesenthal Center, Ariel Gelblung.

The Palestinian Football Association, or PFA, last week urged Argentina to cancel the match. PFA President Jibril Rajoub accused Israel of “politicizing sport” by hosting the match in Jerusalem. But when the boycott campaign was first launched, however, the match was expected to be played in Tel Aviv. The venue was later moved to Haifa and then to Jerusalem.