Murder of Jewish girl in Germany fuels an anti-migrant backlash 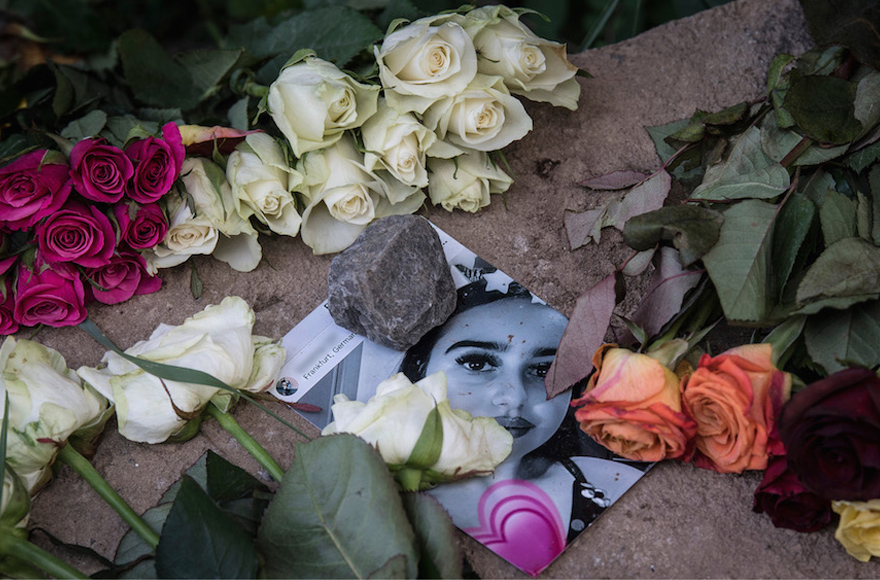 A picture of Susanna Maria Feldman is placed among flowers at a makeshift memorial at the site where the 14-year-old girl has been allegedly raped and murdered by an Iraqi asylum seeker in Wiesbaden, Germany on June 8, 2018 (Boris Roessler/AFP/Getty Images)
Advertisement

(JTA) — In Germany, the case of a young Muslim refugee charged with the rape and murder of a teenage girl has captured media attention and rocked Germany’s Jewish community: The victim, 14-year-old Susanna Feldmann, was Jewish.

Missing since May 22, the girl’s body was found June 6 buried in a shallow grave near her hometown of Mainz. The case has rattled Germany, which is beset with worries about crime emanating from the large Muslim refugee population — many of whom are young, single men, frustrated and aimless.

Before it appeared that anti-Semitism likely played no role in this crime, the story spread in German Jewish social media circles — so much so that the Central Council of Jews in Germany stepped in with a statement meant both to show sympathy and douse flames.

“A young life has been cruelly cut short. Our deepest sympathy goes to her relatives and friends,“ the council’s president, Josef Schuster, said in a media statement June 7 that noted the family’s membership in the Mainz Jewish community. But, he added, “premature conclusions or speculation [about the case] are out of the question.”

Schuster told JTA that he decided to comment in part because he had “heard that in social media the victim was being instrumentalized for xenophobic, anti-migration ends.” He said the case, which he called “very tragic,” does raise issues that are relevant to everyone in Germany, not just to Jews.

While many facts have come out since the body of Susanna Feldmann was found and the suspect was arrested and interrogated, the incident still feeds populist speculation and anger at German Chancellor Angela Merkel, who in 2015 opened the door to more than a million refugees from the war-torn Middle East on humanitarian grounds.

Many are young, single men between 16 and 30 years old — like Ali Bashar,  the 20-year-old former asylum seeker who admitted killing Susanna.

“There are no young women here” for migrants like him, Susanne Schroter, director of the Global Islam Research Center at Goethe University in Frankfurt, said in an interview Saturday with the web.de online magazine.

“We’re no longer talking about isolated cases” of violence against women, she said, adding that German society urgently needed to confront reality.

“I’m not making a blanket accusation against refugees, Arabic men or Muslims,“ Schroter said. “But we clearly are going through something I would call a culture clash.”

Many of these men believe that any woman who is not wearing a headscarf, who shows a bit of skin in the summertime, who drinks alcohol and smokes, is a “slut,” she said. That could mean anyone who is not an observant Muslim.

The tragic story of Susanna Feldmann begins on the night of May 22, when she failed to return home after a night out with friends. According to news reports, her worried mother, Diana, received a WhatsApp message that heightened her fears: “Mama, I’m not coming home. I’m with a friend in Paris. Don’t look for me. I’ll be back in two or three weeks. Bye.”

Susanna was likely already dead when the message was sent.

On June 6, after a 13-year-old boy who had lived in the same refugee shelter with Bashar turned informant, Susanna’s body was found. Social and news media exploded with news that the suspect in her rape and murder was a Muslim Kurdish refugee who fled Germany with his family back to their native Iraq. The fact that Susanna was Jewish also leaped into headlines.

There was speculation about Bashar’s family leaving with airline tickets that did not match their ID. In addition, Bashar apparently is a suspect in other violent crimes committed in Germany. (He was denied asylum but granted a stay of deportation so he could appeal.)

Ultimately, Kurdish elite forces arrested Bashar on Saturday in Erbil, Iraq. German police took him in handcuffs on a flight to Frankfurt, where he was interrogated. Bashar admitted to the murder but contested the rape charge. There is no indication of any anti-Semitic motive.

The story fed right into the populist cauldron of anger at refugees and at the liberal mindset. As a card at one makeshift memorial read: “Susanna, 14 years old, victim of tolerance.“

A legislator from the right-populist, anti-immigrant party Alternative for Germany held a minute of silence for Susanna in the Bundestag on Friday, and was roundly accused of politicizing the murder.

On Sunday, two clashing demonstrations with several hundred participants were held in Mainz. On one side, right-populist, anti-Merkel protesters carried candles and photos of Susanna. On the other, jeering counterdemonstrators toted signs condemning violence against women and “right-wing instrumentalization.” More rallies are being planned.

The fact that Susanna was Jewish is barely mentioned in later news stories, and that is fitting, Schuster said.

“I assume that a girl of any religious background could have become a victim as well,” the Jewish leader said.

Schuster decried the abuse of such cases “by right populists.”

“They use victims as a means to an end, and that’s simply disgraceful,” he said.

Initial speculation that the crime could have had anti-Semitic motivations was quickly set aside, noted Elio Adler, a Berliner who founded the Jewish nonpartisan political group Values Initiative that has criticized Merkel’s policy on refugees.

Early on, Adler had shared the news about Susanna on Facebook, emphasizing that she was Jewish.

There was a sense of personal connection to the victim because of her Jewishness, he told JTA. But otherwise “there is no special conclusion to draw from this case.”

“It just shows where the system in the big picture doesn’t work properly” – regarding the intake and integration of refugees. “And maybe this is going to be a turning point,” Adler said.

Schuster sees this as one of many cases from which German politics must learn.

“I expect the judiciary to come down just as hard on crimes by migrants as it does on crimes by Germans,” he said. But “if someone abuses his privilege to remain in Germany as a guest, the consequences for his right of residence must be examined and the full force of the law applied.”

As one Jewish Facebook member said in a post, if Germany had ejected Ali Bashar based on earlier crimes or abuses, “Susanna might still be alive.”