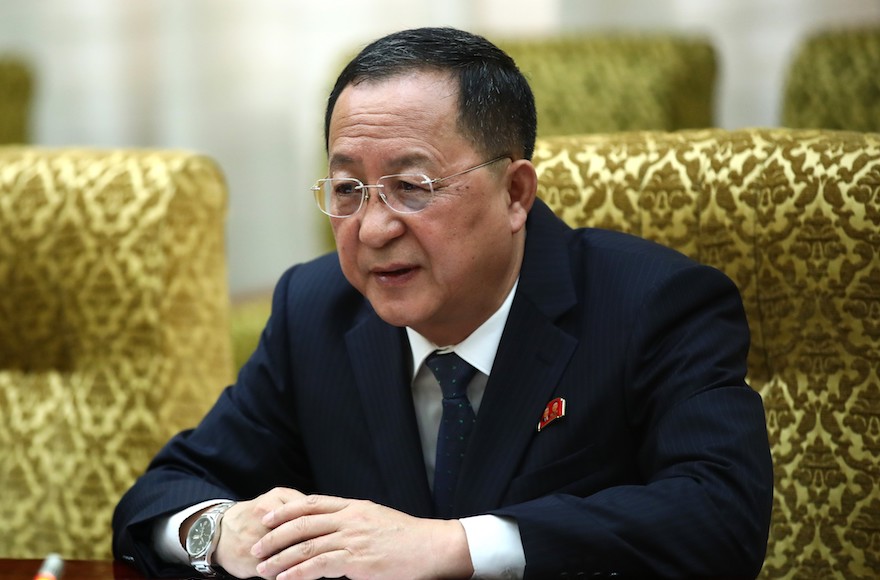 (JTA) — A fake tweet calling Israel’s prime minister a “stinking Zionist” nearly led to an international incident with North Korea in the hours before the historic summit between its leader, Kim Jong Un, and President Donald Trump.

Meanwhile, Trump noted in remarks to reporters after the summit that it may not have taken place but for the death of Jewish college student Otto Warmbier, who died after being tortured in a North Korean labor camp.

The fake tweet appeared Monday on an account bearing the name of North Korea’s foreign minister, Ri Yong-Ho, and called Benjamin Netanyahu a “criminal/liar.” It also said of Netanyahu, “He can’t be bothered giving water to Gaza; he kills them instead.”

The tweet reportedly also accused Israel of trying to sabotage Tuesday’s summit in Singapore between Trump and Kim.

Before being exposed as a fake account, which reportedly only had 2,000 followers and did not bear a verification badge, the tweet led an Israeli spokesman to respond with his own tweet.

“On the bright side — you follow us on Twitter and react,” Emmanuel Nahshon wrote. “On the negative side — you insult us with no reason. Israel is a peace seeking nation, defending itself against a brutal and hate filled Iranian regime seeking our destruction.”

On the bright side- you follow us on Twitter and react. On the negative side- you insult us with no reason. Israel is a peace seeking nation, defending itself against a brutal and hate filled Iranian regime seeking our destruction.

The Twitter exchange came as Kim and Trump arrived in Singapore for the early Tuesday morning meeting. Photos of their first handshake were broadcast on media around the world.

Israeli Prime Minister Benjamin Netanyahu praised Trump. “I commend US President Donald Trump on the historic summit in Singapore. This is an important step in the effort to rid the Korean peninsula of nuclear weapons,” Netanyahu said in a statement.

“President Trump has also taken a strong stand against Iran’s efforts to arm itself with nuclear weapons and against its aggression in the Middle East. This is already affecting the Iranian economy. President Trump’s policy is an important development for Israel, the region and the entire world,” he also said.

“I am sure that as determined as the USA and President Trump were to reach an agreement, they will also, of course, monitor its implementation and this will be a good example to other nations and other people,” Liberman said in an apparent reference to the collapsing Iran nuclear deal.

“We think this is an achievement and the most significant breakthrough that we’ve seen in recent years. I hope that beyond the signatures on the agreement, it will also be carried out in actuality and will stand up to the real test.”

Labor Party chairman Avi Gabbay said in a tweet that events in Singapore could happen in the Middle East.

“As with any negotiations, the way forward demands building trust (even when it appears impossible) and finding shared interests,” he said, adding “It’s just a first step, but leaders with the courage to initiate and bring us together can make all the difference. What happened tonight between the United States and North Korea can happen here in the Middle East too, or anywhere. It sounds crazy until it happens.”

Trump has raised Warmbier’s death repeatedly in public statements in attempts to bring North Korea to the negotiating table over its nuclear weapons program.

“I think that without Otto this would not have happened,” the U.S. leader said in his remarks Tuesday. “Something happened from that day. It was a terrible thing. It was brutal. But a lot of people started to focus on what was going on, including North Korea. I really think that Otto is someone who did not die in vain.”

Warmbier was “a very special person and he will be for a long time in my life,” Trump also said.

Warmbier, 22, a Cincinnati native, was traveling on a student tour of North Korea in early 2016 when he was arrested and sentenced to 15 years of hard labor for stealing a propaganda poster. After international outrage and over a year of imprisonment, North Korea released Warmbier in June 2017, saying his health had deteriorated after a bout of botulism. Warmbier’s doctors said he suffered extensive brain damage and the young man died that month in Cincinnati.

In April, Warmbier’s parents filed a federal lawsuit in the United States against North Korea over their son’s death.