Jeff Sessions: Trump administration will fight with faith groups on their discrimination claims 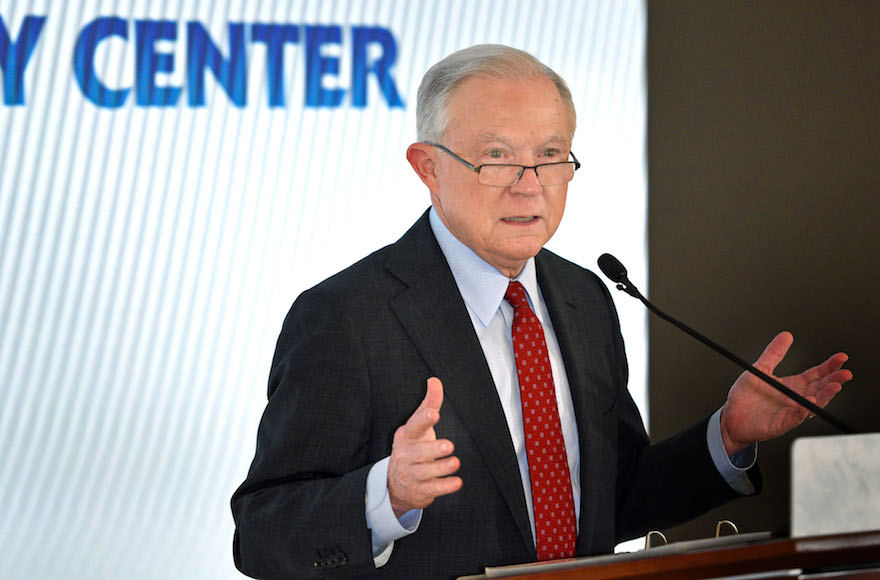 WASHINGTON (JTA) — The Trump administration is ready to take on claims by houses of worship that they face discrimination in seeking building permits from local authorities, Attorney General Jeff Sessions told an Orthodox Jewish conclave.

On Wednesday, Sessions told the annual Orthodox Union Washington conference that he was establishing a program called the A Place to Worship Initiative that will train federal prosecutors in assisting houses of worship that have made claims under the Religious Land Use and Institutionalized Persons Act passed in 2000.

He also said that federal prosecutors in New Jersey were joining a lawsuit filed by Valley Lake Chabad in Woodcliff Lake claiming discrimination under the land use act. Chabad claimed that the Northern New Jersey town blocked its efforts for eight years to build a larger synagogue or expand the current one.

The lawsuit and training program are the latest signals of aggressive Trump administration involvement in religious discrimination cases. The administration backed a bake shop in Colorado that refused service to a gay couple seeking a wedding cake; the Orthodox Union filed a brief in support of the shop in the Supreme Court case, which was decided last week in its favor.

Sessions thanked the Orthodox Union for joining on the side of the baker and the government, earning applause.

“There are plenty of other people who will bake that cake, give me a break,” he said.

The O.U. presented Sessions with an artistic rendering of the biblical command “Justice, justice shalt thou pursue.”

Ahead of Sessions’ speech, the liberal rabbinic human rights organization T’ruah put out a petition asking the O.U. to challenge Sessions’ policies on immigration, including directives that have led to the indefinite separation of parents and children entering the United States at the Southern border. The petition also criticized Sessions’ announcement yesterday that the United States would no longer grant asylum based on danger from gang violence or domestic abuse.

The petition garnered over 1,400 signatures as of Wednesday evening. Included were more than 100 members of O.U. synagogues, among them a handful of rabbis.

On Twitter, the Orthodox Union said its leadership had raised immigration with Sessions in a private session prior to the speech. Nathan Diament, O.U.’s Washington director suggested on Twitter that O.U. President Mark Bane had alluded to the issue in his remarks after Sessions’ speech, when he said, referring to the gift Sessions was receiving that justice must be pursued through “just means.”