‘Maktub,’ an Israeli comedy about low-level gangsters, makes it to Netflix (JTA) — A deadly terrorist attack might seem like an unlikely starting point for a lighthearted comedy. But “Maktub,” a charming and intelligent film that just debuted on Netflix, is set in Israel, a country where that happens more than most would like to believe.

The movie was a box office success in Israel but likely would have been relegated to art house theaters in the United States. A Netflix streaming release gives the film a much broader audience.

It stars Guy Amir and Hanan Savyon — Israeli television stars who co-wrote the screenplay — as Chuma and Steve, two small-time gangsters who work for an organized crime overlord, Kaslassy (played by Itzik Cohen). They are tasked with collecting protection money from various Jerusalem restaurants.

Their lives change when a terrorist bomb goes off at one of their stops while both are in the bathroom. Everyone else in the building is killed, including the one-eyed Chechen thug who served the pair as lookout.

Chuma and Steve recover a metal briefcase that contains all the shekels collected earlier in the day, which they were supposed to turn in. They tell Kaslassy that the Chechen survived the bombing and made off with the cash. Steve wants to leave quickly, before their boss discovers the truth. He hopes to immigrate to the U.S. and open a fish kebab restaurant.

But a reluctant Chuma demands they first go to the Western Wall to give thanks. There they accidentally pull out a note left by a man who asks for God’s help in rekindling the passion in his marriage — he earns little and must work long hours, leaving no time for romance. 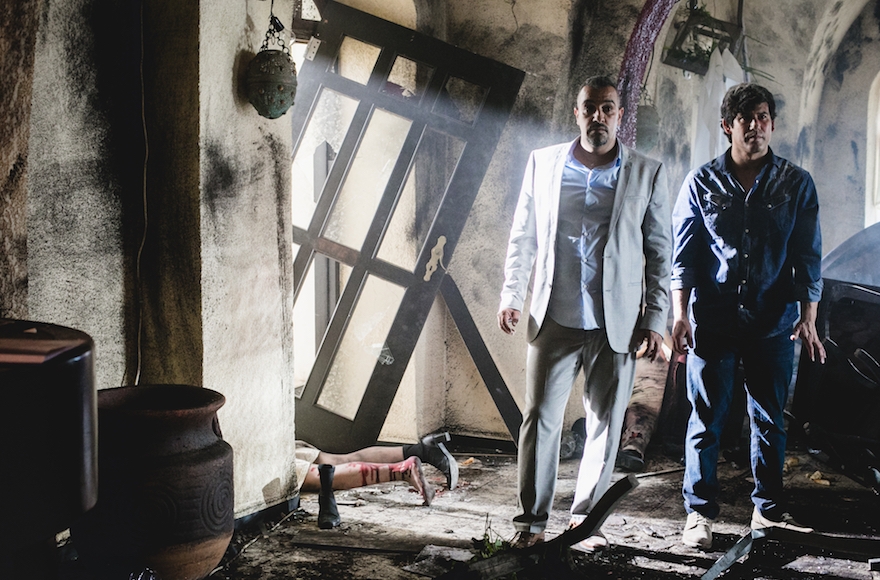 Savyon and Amir play low-level mobsters who change their ways after a terrorist attack. (Idan Milman)

Chuma sees it as a sign and insists they were spared to become the man’s guardian angels. They visit his boss and use a little muscle to convince him that the employee deserves a nice raise.

Chuma also eventually convinces Steve to return to the Kotel and ultimately help a poor Russian emigre pay for her son’s bar mitzvah and a long suffering 40-year-old get pregnant. Acquiring the last two notes requires a little silliness — they dress in drag to approach the female section — but even this comes off as funny rather than crass or disrespectful.

Amir and Savyon’s success in Israel — the pair have written over 280 episodes for seven different series that have been viewed over 80 million times — could spill over into the U.S. Producer Uri Singer has tapped them to create a drama in English about the Middle East conflict through the eyes of an American father searching for his missing daughter.

The word maktub means fate or destiny in Arabic, so maybe the duo is destined for a hit in the states, too.