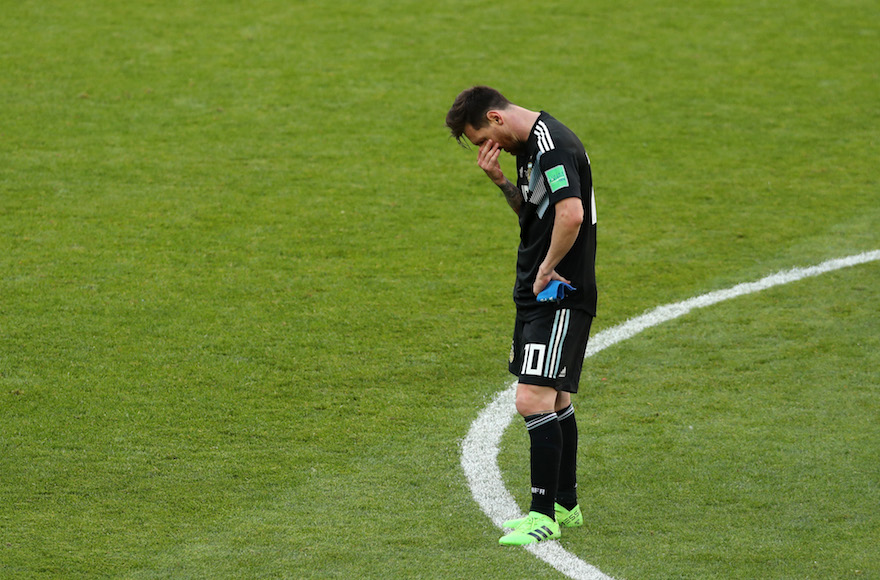 “In the Argentina against Iceland game we saw just how much Messi needed the warm-up game against Israel,” Avigdor Liberman tweeted Saturday night about the game earlier that day in Moscow between the powerful Argentines and upstart Icelanders.

Messi’s failure to convert left the game tied at 1, which is how it finished. Goalkeeper Hannes Halldorsson knocked away the shot.

The June 12 match in Jerusalem between the national teams of Israel and Argentina was canceled several days before it was scheduled following two months of pressure from the Boycott, Divestment and Sanctions movement against Israel. The FIFA international soccer federation has opened disciplinary proceeding against the president of the Palestinians’ soccer governing body for alleged incitement.

Meanwhile, the Israeli Embassy in Argentina spread a message of support for its host country’s World Cup squad, despite the canceled friendly. The messages included strong support for Messi, who had been the victim of death threats over his planned participation in the match in Jerusalem.

The delegation posted on social media a video saying it “will be waiting for ‘Lio,'” referring to Messi and the canceled friendly. Later the embassy said that Israel waited in vain for Messi, but that “… we are a people used to waiting for the… Messi-ah.”

The video shows embassy staffers painting their faces with blue and white for Israel but also light blue and white, the Argentina team’s colors. The video, which was tweeted by the embassy, shows Israel’s ambassador to Buenos Aires, Ilan Sztulman, wearing an Argentine team T-shirt and saying “No doubt, we will be supporting the light blue and white.” The video shows the embassy team celebrating a Messi goal against Brazil, even though Sztulman is a native of Brazil.

The Israeli support for Argentina’s national team gained attention from the major Argentine media and was followed by another tweet just before Saturday’s  match wishing the team “success.”