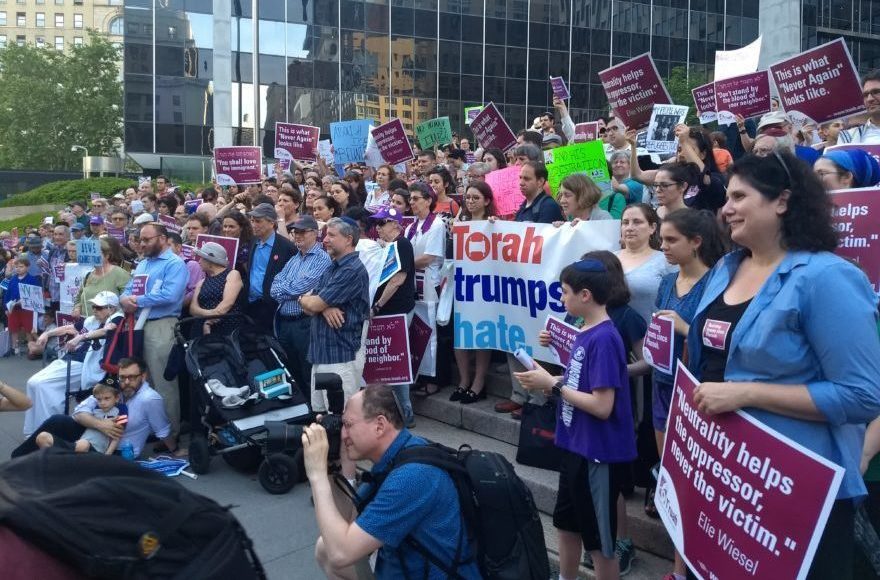 NEW YORK (JTA) — Hundreds of Jews crowded the steps of the New York City headquarters of Immigration and Customs Enforcement to protest the government’s policy of separating families at the southern border.

Jewish texts and liturgy imbued the protest organized by T’ruah, the liberal rabbinic human rights group, and Jews for Racial and Economic Justice. It was co-sponsored by 30 organizations, including congregations and liberal Jewish activist groups.

Speakers included Rabbi Shai Held, co-founder of the traditional egalitarian Hadar Institute and an essayist who often connects biblical themes to current events, and Brad Lander, a Democratic city councilman from Brooklyn with a large Jewish constituency who has allied with liberal Jewish groups. Both condemned the Trump administration in Jewish moral terms.

Held cited a Talmudic passage that says the sounds of the shofar during the High Holidays represent the cries of a mother searching for her son Sisera, a missing Canaanite general in the book of Judges.

“In the most solemn moment of the year, we are asked to learn to listen to the cries of parents who do not know where their children are or whether they will ever see them again,” Held said. “That’s not contemporary liberalism. That’s fundamental Jewish liturgy.”

President Donald Trump issued an executive order Wednesday establishing that migrant families who cross the southern border illegally will be detained together indefinitely. But the speakers at the rally condemned the administration for that decision as well, and for not reuniting the approximately 2,300 children who have been forcibly separated from their parents.

“When children and families are put in cages and in camps, our history requires that we show up and say, when we said ‘Never again,’ we meant ‘Never again,'” Lander said, referring to the Holocaust remembrance slogan. “We are required to show up when xenophobia and Islamophobia and racism and white supremacy and anti-Semitism become the policies of our country.”

The protest began with a new take on the traditional Jewish prayer for travelers, and ended with a recitation in song of the Jewish priestly blessing. During that prayer, protest leaders gathered the children in attendance under a spread-out prayer shawl. Throughout, people held signs reading “This is what ‘Never Again’ looks like” and “Don’t stand by the blood of your neighbor,” a quote from Leviticus.

A member of the militant right-wing Jewish Defense League led a handful of counterprotesters nearby.