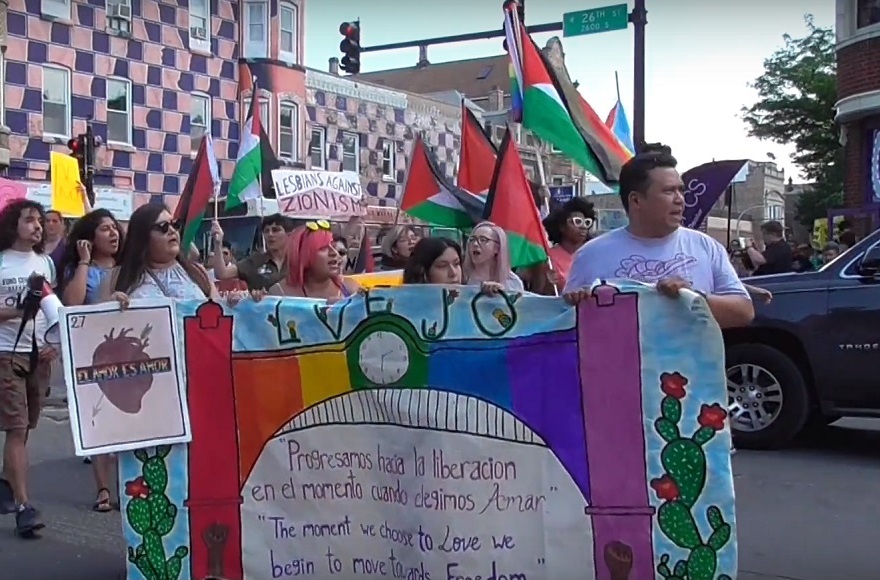 Participants in Sunday’s march can be seen waving Palestinian flags in a video posted by the Windy City Times, a newspaper serving Chicago’s LGBT community. Marchers also waved Mexican, Puerto Rican and rainbow flags, and chanted “No pride in occupation, no pride in deportation,” according to the newspaper.

The march this year was explicitly “a very pro-Palestinian event,” according to the Windy City Times.

Last year, three women were ejected from the Dyke March for waving rainbow flags emblazoned with Jewish stars. Critics accused the march of anti-Semitism, and one woman at the march wrote on Facebook that “Removing those flags, and the people who marched with it, shows a deep level of ignorance, and yes, it also shows antisemitism masquerading as liberal values.”

One of the ejected women, Laurel Grauer, works for A Wider Bridge, a pro-Israel LGBT group.

“People asked me if I was a Zionist and I said ‘yes, I do care about the State of Israel, but I also believe in a two-state solution and an independent Palestine,'” Grauer said last year. “It’s hard to swallow the idea of inclusion when you are excluding people from that. People are saying ‘You can be gay but not in this way.’ We do not feel welcomed. We do not feel included.”

March organizers said last year in a statement that the women were ejected because they were pro-Israel while the march was explicitly anti-Zionist, and because of the Jewish star flag’s “similarity to the Israeli flag and the flag’s long history of use in pinkwashing efforts.” Pinkwashing is a term used by critics of Israel alleging that the Israeli government touts its pro-LGBT policies in order to distract from its treatment of the Palestinians.

Gretchen Rachel Hammond, the journalist who broke the Jewish flag story for the Windy City Times, was removed from her reporting duties following an outcry over the incident.