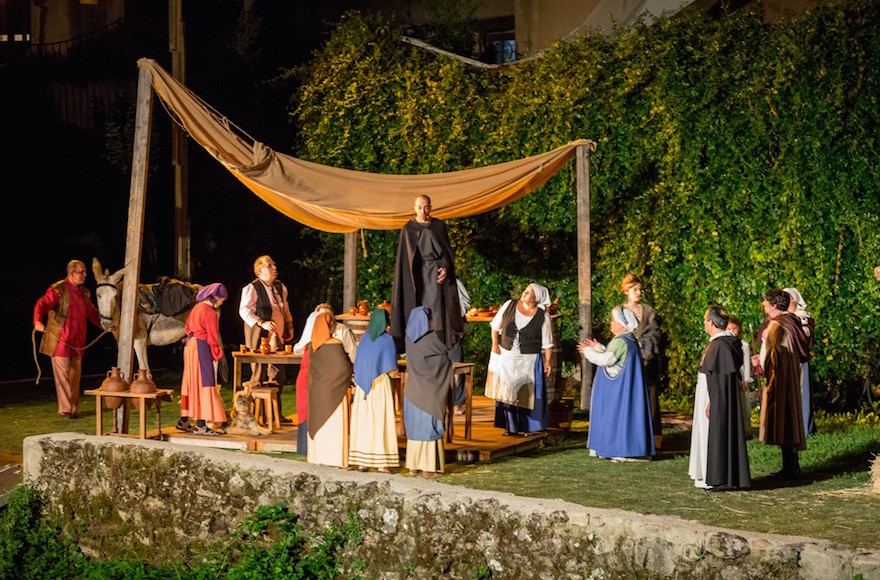 Performers at the annual Los Conversos festival in Hervás, Spain, which celebrates the culture and legacy of Jews who were persecuted during the Inquisition/ (Courtesy of Los Conversos)
Advertisement

(JTA) — The world’s longest-running festival dealing with the Spanish Inquisition kicks off next week, celebrating the culture, heritage and history of the hundreds of thousands of Jews who were persecuted and forced into Christianity after 1492.

Among its highlights is a new play about a medieval murder that was blamed on Jews in a blood libel.

The play, titled “Black Soul,” will be performed next week at the Los Conversos festival in the town of Hervas, in western Spain, some 125 miles east of the capital Madrid. Taking place for the 22nd consecutive year, the festival takes its name from the Jews who converted to Roman Catholicism in Spain or Portugal during the 14th and 15th centuries.

Starting in 1492, the Catholic Church and Spain’s royal house initiated the Inquisition, persecuting Jews, conversos and others in a campaign that spread in 1536 to neighboring Portugal. Hundreds of thousands were forced into exile, and thousands were converted under duress. Thousands more were murdered.

The four-day festival features plays, songs and various activities. The first edition was put on in 1996.

At the center of the fictional play by Miguel Gómez Andrea is the murder of a young women named Juanita. The play depicts the suspicions and hatred of the time but also some acts valor by non-Jewish neighbors, according to the Hoy news website.

Hervas has one of the Iberian Peninsula’s best-preserved Jewish quarters. Among the few Jews living there is Abigail Cohen, an Israel-born bakery owner.

Separately, in Portugal, the northern town of Moimenta da Beira said it would open a Jewish history museum in one of its oldest and best-known buildings, the Casa de Moimenta, also known as Casa do Carrasco, the Jornal do Centro reported.

As in other towns in Portugal that used to have large Jewish communities, the Jews of Moimenta da Beira felt confident enough to advertise their Jewish identity even after they were forced by law to convert to Christianity. The town has no Jewish residents today.

Some forcibly converted Jews carved into the exterior walls of the homes marks that read “horror” in Hebrew when read inversely. Others chipped off from the stone door frames of their homes the section to which a mezuzah would have been affixed.

Spain and Portugal passed laws in 2013 that grant citizenship to descendants of Sephardic Jews who left because of the Inquisition.