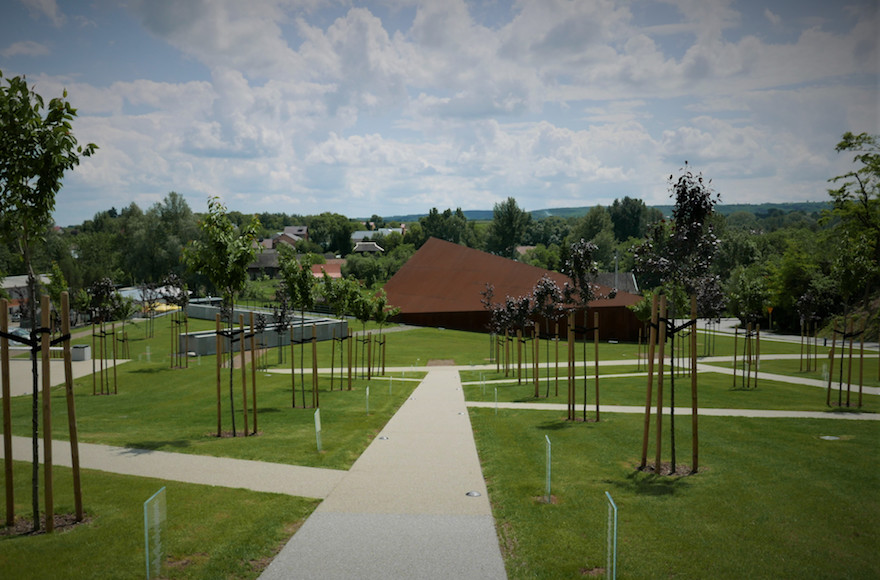 A haunting story unfolds within the walls of the Ulma Family Museum, built into a hillside in this rural village in southeastern Poland. (Courtesy of the Ulma Museum)
Advertisement

This story is sponsored by the Polish Cultural Institute New York.

MARKOWA, Poland — Memorial plaques bearing the names of Poles killed for rescuing Jews line the pathway leading to a small, austere structure built into a hillside in this rural village in southeastern Poland.

In the center courtyard, a large slab is inscribed to the memory of Jewish victims of the Holocaust.

The quiet, reflective space sets the stage for the haunting story that unfolds within the walls of the building, a museum that memorializes Józef and Wiktoria Ulma, local farmers who sacrificed their lives and those of their six young children for sheltering eight Jews during the Nazi occupation.

Opened about two years ago, but still little known among Jews worldwide, the Ulma Family Museum of Poles Saving Jews in World War II is the first national museum to honor Poles who aided Jews during the Holocaust.

In 1995, Józef and Wiktoria Ulma were posthumously named Righteous Among the Nations by Jerusalem’s Yad Vashem Holocaust memorial, which said their story “has become a symbol of Polish sacrifice and martyrdom during the German occupation.”

More than 6,800 Poles have been recognized for risking their lives to save Jews, the largest number from any individual country. The museum’s permanent exhibit seeks to shed light on the Polish righteous and those who assisted Jews during the Holocaust. There are similar institutions dedicated to righteous gentiles in France and Germany.

But beyond the historical chronicle, says director Anna Stróż, the Markowa museum offers “an important universal message about being human in inhuman times.”

Beginning in the autumn of 1942, during the Nazi occupation of Poland and following roundups and killings of Jews in the region, the Ulmas offered shelter to eight Jews at their farmhouse in Markowa: Saul Goldman of nearby Łańcut and his four sons, and Genia Grünfeld, her sister Lea Didner and Didner’s daughter, all of Markowa. The group hid in the family’s attic for about a year and a half. Goldman, a cattle dealer, and his sons helped the Ulmas with farm chores.

In the early morning of March 24, 1944, the Ulma farmhouse was raided by Nazi officers and members of the Blue Police, the police forces in German-occupied Poland. The Ulmas likely were ratted out by Włodzimierz Leś, a local policeman who knew the Goldmans from Łańcut.

The Jews in hiding were murdered first. Next the Nazis killed Józef and Wiktoria, who was seven months pregnant. The commanding officer, Lt. Eilert Dieken, then ordered the murder of the six Ulma children.

“We will spare you the trouble in the village,” Dieken remarked, according to one of the policemen present.

Under Nazi rule, harboring Jews was an offense punishable by immediate execution. Leś was shot by Polish underground soldiers a few months after the Ulmas’ massacre.

Some 90,000 people have visited since the museum here opened in March 2016, according to museum officials. Most have been with organized tour groups from Poland or Israel, including student groups, Stróż said.

This summer, the Polish Cultural Institute New York is featuring the Ulmas’ story in an exhibition on the fence outside the Polish Consulate in Manhattan. It opened in late June and presents the history of the Ulma family during World War II. 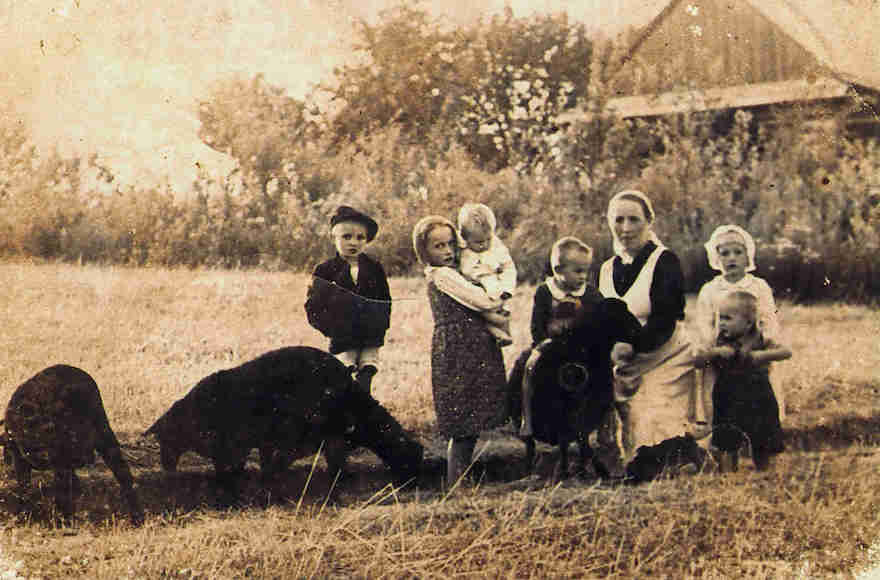 The six Ulma children, seen here with their mother during their last summer alive, were killed after watching their parents’ execution for harboring Jews. (Courtesy of the Ulma Museum)

In Markowa, the museum’s permanent exhibit draws on historical records, original documents and artifacts from the Ulma family and local residents, as well as personal testimonies. Explanatory information is in Polish, English and Hebrew. The museum has a stunning collection of photographs taken by Józef Ulma, an amateur photographer, who chronicled daily life in the area.

Before the war, approximately 120 Jews lived in Markowa. Thanks in part to the efforts of eight Polish families, some 21 Jews are known to have survived.

Visitors can “uncover” photographs of Jewish hiding places by tilting back small steel covers. One tells of the rescue efforts of Jan and Helena Cwynar, who sheltered Abraham Segal. Now 86 and living in Israel, Segal is the only remaining Jewish survivor from Markowa.

Local Poles who denounced their neighbors for sheltering Jews also are part of the exhibit. One item features handwritten testimony by Markowa’s mayor from the postwar trial of a policeman involved in the Ulma farm raid.

The exhibit includes testimony by local Poles in postwar trials about neighbors who attacked farms belonging to those hiding Jews. A re-creation of the Ulmas’ farmhouse is part of the museum in southeeastern Poland that tells their story. (Courtesy of the Ulma Museum)

Poignantly, the museum features a one-to-one scale re-creation of the interior of the Ulmas’ modest home. Furniture, a workbench and other objects provide a palpable feel of their simple lives. Yet Józef’s farming interests and techniques were cutting edge for the time, and he was a beekeeper, bred silkworms and grew fruit trees.

Books and photographs suggest that Józef was well-read and reveal a rural family surprisingly engaged in the wider world beyond daily challenges of farm life.

While the courage and heroism of the Ulma family is widely acknowledged, some Holocaust scholars have cautioned that the exhibit’s focus on rescuers may leave visitors with the erroneous impression that it was common for Poles to assist their Jewish neighbors. In fact it was not, and even in cases where Poles risked their lives to save Jews they had to fear their Polish neighbors betraying them. (The Ulma Museum does note clearly that only some Poles saved Jews.)

The scholars’ concern comes amid the Polish parliament’s passage last year of a law that would have criminalized ascribing blame to the Polish state or Polish nation for Nazi crimes against Jews or suggesting that Poland bears some complicity for the Holocaust. At the request of Prime Minister Mateusz Morawiecki, lawmakers voted this week to moderate the law, making it a civil and not a criminal offense. The law also is being reviewed by Poland’s constitutional court.

Stróż said her museum takes care to present the full spectrum of attitudes and negative behavior that was present during the period. Next year, she said, the museum plans to hold an international educational conference “to confront the different points of view and different ways of narration.” 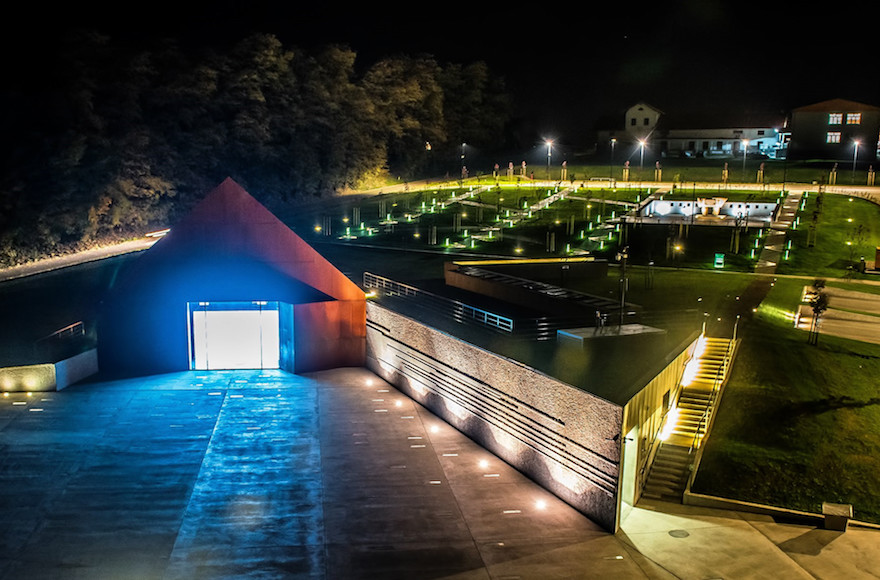 The $2 million museum was designed by Nizio Design International, a Warsaw-based architectural firm that also designed the core exhibition of Warsaw’s POLIN Museum of the History of Polish Jews. (Courtesy of the Ulma Museum)

Rabbi Michael Schudrich, the chief rabbi of Poland and a U.S. native, called the Ulma Family Museum a worthy endeavor. He said he was satisfied in the way it addresses difficult issues in local Polish-Jewish relations, and that it does not claim to be a museum about the broader history of the Holocaust.

“The museum was created to respect and talk about the righteous gentiles,” Schudrich said. “When God created human beings, he wanted us to be like the righteous.”

Stróż, an art historian whose doctoral studies at Catholic University in Lublin focused on places of remembrance, has ambitious plans for the museum. She wants to bolster programming, broaden the museum’s reach of visitors and hire more staff.

Most urgently, however, she wants to continue the museum’s mission of acquiring personal testimonies from rescuers and those who were rescued.

“It is the greatest challenge for us today,” Stróż said, “all the more so because we are aware of our responsibility and the inexorable passage of time.”

(This article was sponsored by and produced in partnership with the Polish Cultural Institute New York, a diplomatic mission of Poland’s Foreign Affairs Ministry that promotes comprehensive knowledge of Poland, Polish history and national heritage. This story was produced by JTA’s native content team.)