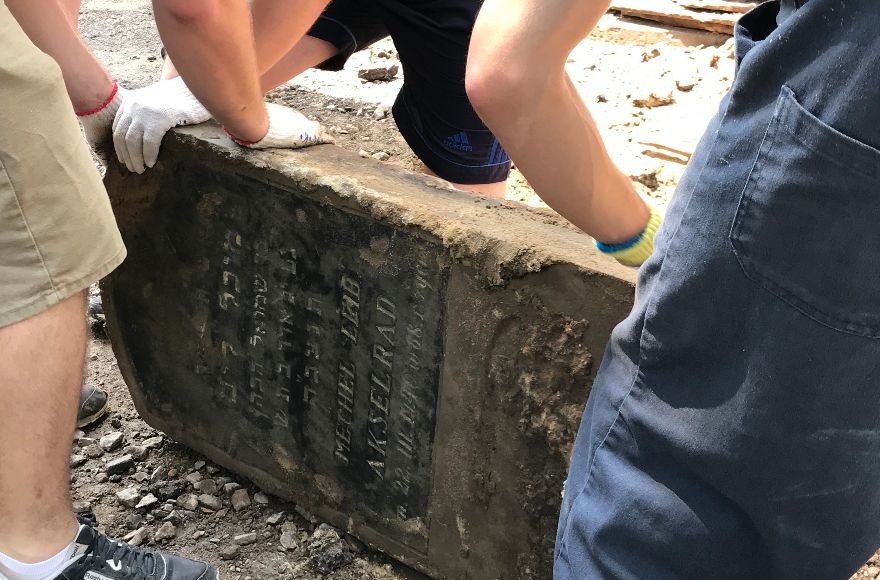 Volunteers rescue a Jewish headstone used to pave a street in the western Ukraine city Lviv, one of up to 100 headstones discovered during roadwork in the center of the city. (Marla Raucher Osborn, Rohatyn Jewish Heritage)
Advertisement

(JTA) — Volunteers have rescued dozens of Jewish headstones used to pave a street in the western Ukraine city Lviv.

“The whole street is made from ‘matzevot,'” Sasha Nazar, director of the Lviv Volunteer Center of the Hesed Arieh All-Ukrainian Jewish Charitable Foundation, told Jewish Heritage Europe, using the Hebrew word for gravestones.

Nazar said he was notified about the discovery last week after city workers began roadwork on downtown Barvinok Street. The Lviv Volunteer Center organized volunteers to work at the site this week to rescue the headstones.

Nazar estimated that there could be up to 100 headstones under the stretch of road, and maybe more. Photos show them lying flat and closely packed, some face down and some face up. They had been covered over by the road surface. Many of the stones appear to be intact. Volunteers said most seem to date from the first part of the 20th century.

“This is the biggest discovery of matzevot in Lviv [used as paving] I can remember,” he said.

Nazar said the stones will be transported to the Yanovskoye Jewish cemetery, where more than a dozen gravestones rescued from the street in 2010 and 2017 were taken.

Jewish cemeteries were demolished and used as quarries to pave roads and for other construction projects during World War II under the Nazis and during the postwar Soviet period in Ukraine, Lithuania, Poland and elsewhere.

“This stretch of [Barvinok Street] appears to be completely paved with Jewish headstones,” Marla Raucher Osborn, an American who lives in Lviv, told JTA.

Osborn and her husband, Jay, are among the volunteers working to remove the stones. Together they head Rohatyn Jewish Heritage, a Jewish heritage project in her ancestral town. She noted that during World War II “there were Gestapo residences on this street and Jewish labor was requisitioned to pave the roads with headstones stolen from the Jewish cemeteries.”

On Thursday, dozens of volunteers braved rainy conditions to join the fourth day of the rescue effort.