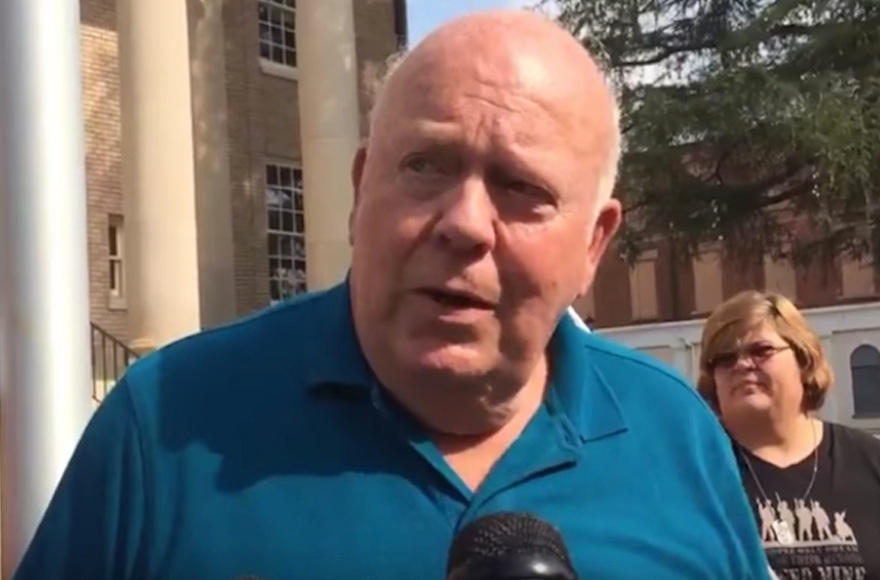 Russell Walker, a GOP candidate in North Carolina, wrote on his website that God is a “racist white supremacist” and that Jewish people are Satanic. (Screenshot from Youtube)
Advertisement

(JTA) — The North Carolina Republican Party withdrew its support for a candidate for the state’s General Assembly over his racist and anti-Semitic statements.

Russell Walker, 75, won the Republican primary in May for the General Assembly seat in District 48.

“The North Carolina Republican House Caucus and our members will not support Mr. Walker’s campaign given his comments and actions,” Rep. John Szoka, the conference chairman of the caucus said in a statement Wednesday. “While Mr. Walker won the Republican primary, his rhetoric and actions have no place in the Republican Party, and he should strongly consider withdrawing his candidacy.”

A website that Walker has claimed to own includes essays that say God is a racist white supremacist and Jews are descended from Satan. Walker has authored multiple essays and other articles on the site and has said it belongs to him, the Raleigh-based News & Observer reported.

An article on the site written by Walker also says that “all jews are the children of Satan. Cain being the first jew as a result of Satan raping Eve in the Garden of Eden and Cain being the first seed of Satan,” and that “the I.R.S. and most other ‘taxing’ systems of the world are controlled by and are just an appendage of jewish institutions. In the case of the United States it is the Federal Reserve Bank, one of many Rothschild controlled central banks.   The Federal Reserve Bank is owned by 9 European jewish banks, all ultimately being Rothschild controlled.”

The Rothschilds, a historically wealthy Jewish family, have been the subject of anti-Semitic conspiracy theories since the mid-1800s.

In 2017, Walker filed a lawsuit in South Carolina to have Confederate flags and portraits of Confederate generals remain in the main courtroom of the York County Courthouse. A judge threw out the case, saying Walker had no standing to bring the lawsuit because he was a North Carolina resident and that the suit was without merit because there had been no action by a court beforehand, the Southern Poverty Law Center reported.

The home page for Walker’s campaign website features a photo of him with a white mule titled “My little white ass and me.” What he terms his “Populist Platform” includes calls to “End Compulsory Fascist Auto and Moped Insurance,” “End rigged for conviction Criminal trials,” “End compulsory vaccinations” and to “Make English the official State language.”

In November, Walker will challenge state Rep. Garland Pierce, a Democrat who has served in the state House for 14 years.