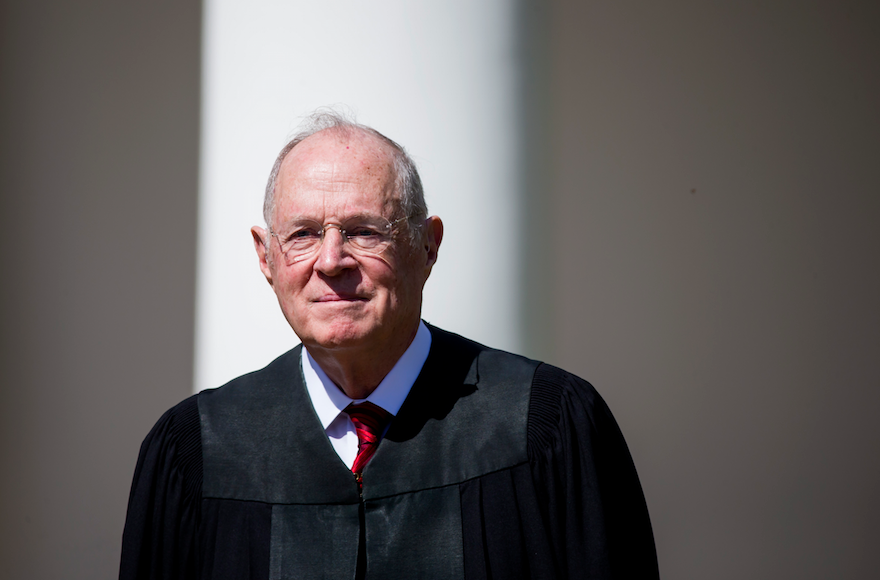 Anthony Kennedy is seen during a ceremony at the White House in Washington, D.C., April 10, 2017. (Eric Thayer/Getty Images)
Advertisement

NEW YORK (JTA) — Not an hour after Anthony Kennedy announced his retirement as associate justice on the Supreme Court, the National Council of Jewish Women tweeted its dismay.

“Justice Kennedy’s retirement could drastically shift the balance of the Supreme Court, and threaten the very rights and liberties we’ve fought so hard to protect,” NCJW tweeted Wednesday. “We need a justice who will stand up for all of our rights – not just the wealthy and powerful.”

NCJW’s is a voice of the Jewish liberal majority, which tends to support abortion rights, a strong divide between church and state, an extensive social welfare safety net and a liberal approach to immigration.

For that majority Kennedy was, at least since 2005,  the essential and persuadable swing vote on an ideologically partitioned court. He was responsible for the 5-4 rulings that legalized same-sex marriage and preserved Roe v. Wade. Although prone to disappoint liberal and centrist groups — upholding President Barack Obama’s policy of warrantless wiretapping, voting to limit campaign finance restrictions in Citizens United and removing key provisions of the Voting Rights Act — he was nevertheless seen as the last check on what is likely to become a deeply conservative court.

“In the last few years, Justice Kennedy has loomed large at the Supreme Court because he so often cast a deciding swing vote, often in historic ways, as in [same-sex marriage] or Citizens United,” Marc Stern, general counsel at the American Jewish Committee, told JTA. “While he was not the liberal justice many Jews would no doubt have preferred, he served as a reminder that constitutional law and the Supreme Court can be something other than pure predictable partisan politics.”

And as a swing vote, Kennedy’s rulings on religious liberty also won him support from conservative Jewish groups. His vote proved decisive in the Hobby Lobby case, which found that family-owned corporations need not pay for employee contraception insurance if doing so violates their religious values, and earned praise from Orthodox groups like the Orthodox Union and Agudath Israel of America.

“The Court’s ruling stands for the proposition that — even when the government seeks to implement valuable policy goals — it must do so without trampling upon the conscientious beliefs of American citizens,” the Orthodox Union said following Hobby Lobby decision, adding that “there are many other ways to meet the policy goals without infringing on religious liberty.”

Kennedy, who will be 82 when he retires effective July 31 and is the 14th longest-serving justice, decided countless cases regarding religious liberty, many of which were important to — and divided — American Jews on all sides.

They include the decisions to legalize same-sex marriage, preserve Roe v. Wade and deregulate campaign finance, as well as prevent public schools from requiring student prayer and bar the government from endorsing a particular religion, among others.

“On church and state he was persuadable,” Stern told JTA, but adding, “He was more or less on the conservative side of Establishment [Clause] issues.”

Kennedy, as reflected in his invention of the famed “coercion test,” believed that religious liberty, based upon the First Amendment, while expansive, did not mean the government could make certain religious behavior mandatory.

Throughout his three-decade tenure, Kennedy was a fierce defender of religious liberty for those of all faiths. Even in his same-sex marriage opinion, which was lauded by liberals, Kennedy extended a rhetorical olive branch to social conservatives. He wrote that people opposed to same-sex marriage, including Agudath Israel of America, which filed a brief to the Supreme Court in opposition, “reach that conclusion based on decent and honorable religious or philosophical premises, and neither they nor their beliefs are disparaged here.”

In 2015, Kennedy wrote the majority opinion in Zivotofsky v. Kerry, which ruled that a boy born to American parents in Jerusalem did not have the right to have his birth nation listed as Israel on his passport. Kennedy’s opinion declared that the executive branch, at the time headed by Obama, maintained the exclusive right to decide the sovereignty of any territory, including Jerusalem.

Kennedy’s thinking, although focused on executive power, not Jerusalem’s status as the Israeli capital (“This case is confined solely to the exclusive power of the President to control recognition determinations,” he wrote), provoked anger from diverse swaths of the American Jewry.

“Many Jews, not all, did not welcome the Jerusalem decision,” Stern told JTA, carefully refusing to speak for the panoply of American Jews. The Anti-Defamation League, American Israel Public Affairs Committee, Hadassah, the Jewish Council for Public Affairs and NCJW, among others, signed a brief expressing displeasure with the decision. The American Jewish Committee filed a brief as well, also issuing a statement expressing disappointment in the decision.

“Whether he was good or bad for the Jews depends on where you think the Jews ought to be,” Stern told JTA, also noting, however, that “he’ll be missed.”

On both sides of the political divide, activists increasingly value judicial partisanship over Kennedy’s ability to cross ideological lines.

When the next justice is appointed, Stern said, “demands in ideological partisanship will be very strong.”