Netanyahu is welcoming authoritarians to Israel. Does that make his country safer? 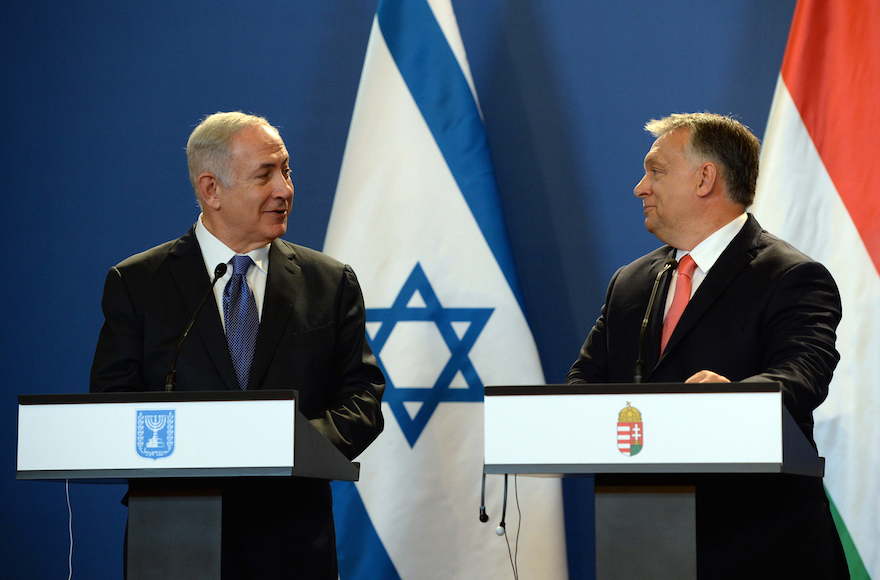 (JTA) — It has become a staple of his stump speeches to audiences in Israel and abroad: Far from being isolated politically, Israeli Prime Minister Benjamin Netanyahu argues, Israel is forming new and stronger alliances with a host of countries around the world.

In recent years, Netanyahu has either visited or hosted President Vladimir Putin of Russia, Prime Minister Viktor Orban of Hungary and President Ilham Aliyev of Azerbaijan, among others. Netanyahu plans to host Orban in July and Filipino strongman Rodrigo Duterte in September.

Netanyahu touts the support for Israel from these leaders in international forums. But critics say he is cozying up to authoritarian governments and turning a blind eye to some efforts by their regimes at Holocaust revisionism and anti-Semitic dog whistling.

That criticism is being heard again as the Foreign Ministry of Israel confirmed this week that Netanyahu will host Orban from July 18 to 20. Numerous Israeli lawmakers have urged Netanyahu not to do so, citing among other things the right-wing Hungarian leader’s campaign against the Hungarian-American philanthropist George Soros that many considered obliquely anti-Semitic.

Tamara Cofman Wittes of the Brookings Institution criticized the upcoming visits on Twitter, writing that the Israeli government is “hosting Orban and now maybe Duterte? Sad company to keep.”

Netanyahu’s defenders say he is willing to extend diplomatic overtures to both democracies and authoritarian regimes in what he sees as a necessary pursuit to ensure the state’s survival.

“Israel often has no choice but to maintain ties with unsavory or authoritarian regimes,” Jonathan Schanzer, senior vice president at the Foundation for Defense of Democracies, told JTA. “As a country that has found itself isolated by its neighbors and sometimes shunned by Western Europe, Israel has been forced to try and find friends in unlikely places.”

“This outreach [to unsavory regimes],” Schanzer clarified, “should not be conflated with the alliance that it shares with the United States that is based on values.”

Critics of the outreach say it is coming at a time of resurgent right-wing nationalism, and that Israel is on the wrong side of a history that has usually worked against the interests and well-being of the world’s Jews.

“[It’s] amazing that anti-Semite Viktor Orban is going to visit Israel on the Prime Minister’s invitation, but @ArielElyseGold has been deported with a valid visa,” tweeted the Forward’s Batya Ungar-Sargon, referencing Israel’s deportation over the weekend of Ariel Gold, an American BDS activist. “What a tragic state of affairs.”

Daniel Shapiro, the U.S. ambassador to Israel from 2011 to 2017, largely rebuked Netanyahu’s decision-making. Shapiro said rolling out the red carpet for authoritarians is an ill-advised attempt to adapt to a diplomatic reality promoted by President Donald Trump in which relations with Russia, China and Hungary are prized, while those with Germany, the United Kingdom and France are diminished.

“Israel has long, and justifiably, considered itself part of the club of democracies, as an expression of its self-identification as a Jewish and democratic state,” Shapiro told JTA. “Today, as a wave of illiberalism challenges the democratic world – from America to Europe to Israel itself – there may be temptations in aligning with those who seem to be on the rise: Trump, Putin, Orban, [and] Duterte.

“Trump’s own distancing from democratic allies and expressed sympathy for autocrats undoubtedly encourage this trend.”

“While Israel’s unique security and other requirements understandably impel it to develop as wide a network of relationships as it can,” he said, “I think it will want to avoid finding its own democratic identity tarnished by, of its own choosing, aligning less with the club of democracies and more with this very different coalition.”

Chemi Shalev, a correspondent for the Israeli daily Haaretz, has been particularly pointed in his criticism of Netanyahu.

He acknowledges that the European Union is often critical of Israel, and that part of Netanyahu’s motivation in courting  Hungary and Poland is to counter that tendency. And Netanyahu’s affinity for Trump has paid off for him with the revocation of the Iran nuclear deal and the relocation of the U.S. Embassy to Jerusalem.

But Shalev suggests that Netanyahu’s relationship with Orban is more than tactical.

“Both strive for ethnocentric illiberalism. Both share a disdain for liberal values, especially those admired and cultivated by the vast majority of American Jews. Both agitate against immigrants. Both are sworn enemies of the free press. Both feel an affinity with Russian strongman Vladimir Putin and both have tied their country’s fates to Donald Trump,” he wrote. “Needless to say, Netanyahu has pointedly refrained from criticizing Trump for any of his questionable statements on racists and Jews, including his post-Charlottesville equation of neo-Nazis with anti-racist demonstrators.”

“The outreach to the African nations is a good example of how none of this is new,” he told JTA. “In the early years after the founding of the state, Israeli diplomats labored to reach out to the African states. Israel took Africa for granted. Now Netanyahu has rekindled some of those relationships. So, no, I don’t think this is Netanyahu specific.”

“Netanyahu is pursuing legitimate objectives of expanding support in Europe and elsewhere for Israel’s position on vital security issues,” Herscho told JTA. “Despite obvious disagreements relating to the Israeli-Palestinian conflict, Netanyahu’s recent tour to Germany, Britain and particularly to France reflects the importance he attaches to their positions towards Israel’s security concerns.”

Elliot Abrams, senior fellow for Middle Eastern studies at the Council on Foreign Relations, pushed back against the insinuation that Netanyahu is pursuing an authoritarian charm offensive – intentionally and specifically courting authoritarians in the pursuit of a new sphere of alliances. Instead, Abrams suggested, Israel is intent on — and increasingly successful in — cultivating allies where it can, even among unsavory regimes.

“Israel remains isolated by many of its neighbors in the Middle East and is the subject of endless attacks in every U.N. agency. Moreover, it is the target of a well-financed BDS movement, especially in Europe,” Abrams told JTA. “It has been the goal of every Israeli government to break the isolation, and Netanyahu has had more success than any predecessor.”

Abrams lauded Netanyahu’s ability to manage simultaneous relationships with the United States and Russia, as well as China and India, the latter of which he dubs “the world’s most populous democracy,” although writers in Foreign Affairs, The New Yorker and The Economist have criticized Indian Prime Minister Narendra Modi’s recent “authoritarian streak.”

“In my view, Netanyahu’s successful effort to improve Israel’s global ties should not be criticized as an ‘authoritarian charm offensive,’” Abrams said.

“Yes, Orban visits, but so does Modi.”