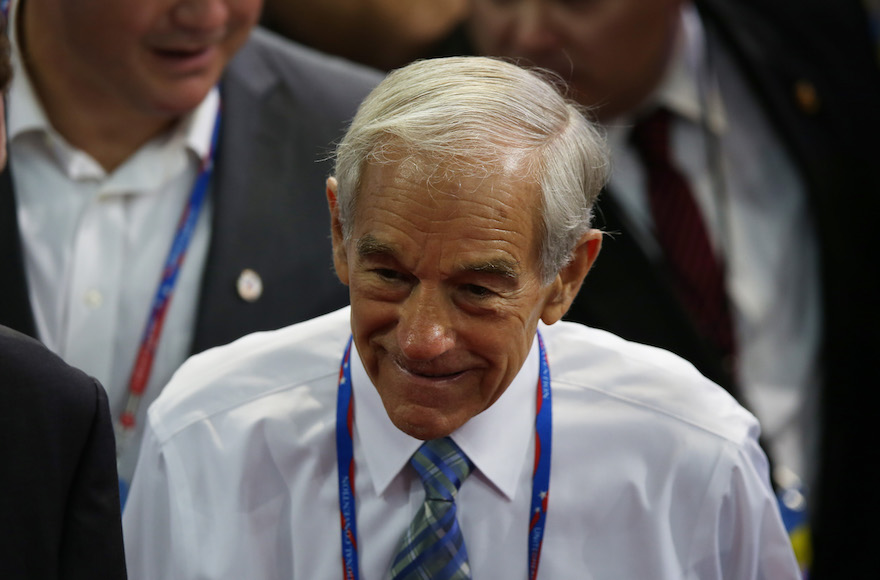 (JTA) — Former Republican presidential candidate Ron Paul tweeted and then deleted a racist and anti-Semitic cartoon that he said was meant to explain “cultural Marxism.”

The cartoon shows four caricatures of different ethnicities – including  a Jewish man with a hooked nose, a black man with exaggerated lips, an Asian man with slanted eyes and a man who looks like a Neanderthal – punching a cartoon of Uncle Sam with a shared red fist emblazoned with a hammer and sickle. The four men are shouting “Cultural Marxism.”

The beginning of the tweet reads “Are you stunned by what has become of American culture?

“Are you confused as to how every moral principle could be turned on its head so quickly?

“Well, it’s not an accident.

“You’ve probably heard of ‘Cultural Marxism,’ but do you know what it means?”

Though Paul deleted the image, it had already been saved by several social media users as a screenshot.

Paul, a former congressman from Texas, later tweeted and posted on Facebook the same rant against cultural Marxism but replaced the cartoon with the words “Political Correctness” overlaid with the “no” symbol, a red circle with a line through it.

The term Cultural Marxism has become a racist dog whistle claiming that the flood of nonwhite immigrants into America and Europe is causing a cultural decline.

The racist cartoon was created by doctoring an anti-imperialism, pro-communism cartoon by superimposing the racist and anti-Semitic images.

Paul was roundly criticized on social media for the image. Some draw parallels between the image and Nazi propaganda, according to The Hill.

In 2011, reporters exposed racist newsletters that had been sent out in Ron Paul’s name in the late 1980s and early 1990s, such as Ron Paul’s Political Report, Ron Paul’s Freedom Report, the Ron Paul Survival Report and the Ron Paul Investment Letter. The newsletters also had come to light during the 2008 campaign, when Paul said that he didn’t actually write the newsletters and they did not represent his views, but because they carried his name he was morally responsible for their content.