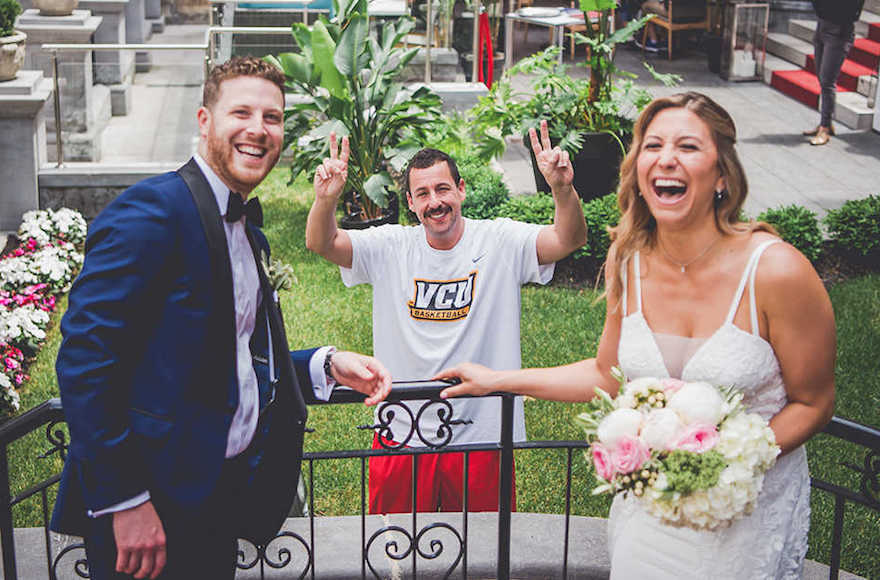 (JTA) — Adam Sandler wasn’t in “Wedding Crashers,” but he plays the part well.

Alexandra Steinberg and Kevin Goldstein were in the middle of their wedding day photo shoot at a downtown Montreal hotel on June 24 when Steinberg spotted the Jewish actor and waved to him. To their surprise, Sandler walked up to them to say hello.

“We told him we were Jewish and he wished us mazel tov!” Goldstein told The Jerusalem Post. “He then offered to snap some pics with us. He was great and down to earth.”

The photographer, Sana Belgot, posted the photos on Instagram on Friday.

One photo shows Sandler posing between the bride and groom while making a peace sign, and others show him talking to the couple.

The actor politely declined an invitation to stick around for the wedding ceremony — maybe partly because he was wearing a tee shirt and shorts (he didn’t attend Virginia Commonwealth University, as his shirt might seem to imply, but did play a game of basketball there once while in the area for a comedy gig).