A political cartoon costs an Israeli artist his job 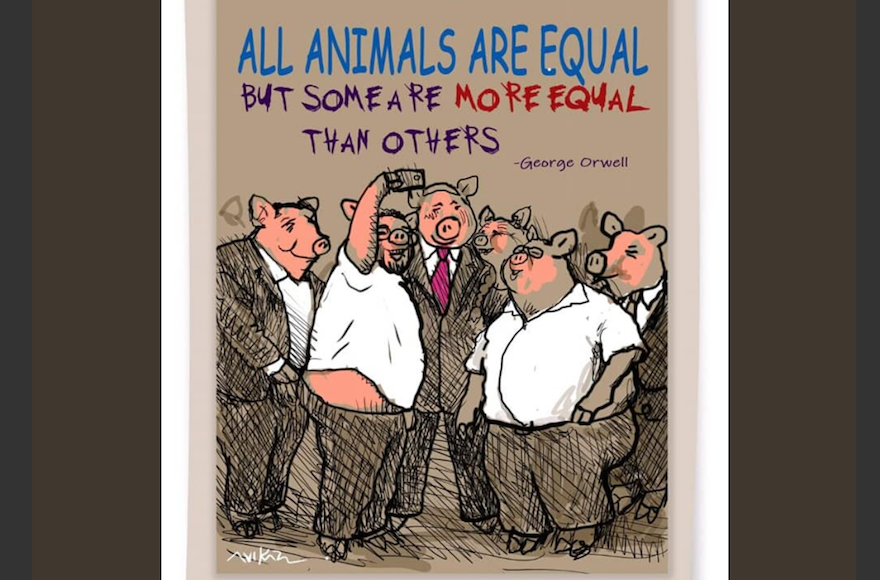 (JTA) — It was an image ripe for parody.

A group of exuberant, slightly disheveled right-wing Knesset members, with a natty and grim-faced Benjamin Netanyahu at the center, posed for a selfie taken by a grinning Oren Hazan, a parliamentarian once censured for insulting female and Arab colleagues. The photo was taken right after Israel’s government passed the contentious nation-state law, which declares that the right to exercise national self-determination in the State of Israel is unique to its Jews.

So Avi Katz parodied it. In his latest political cartoon for The Jerusalem Report, an Israeli English-language magazine distributed by The Jerusalem Post, Katz depicted the subjects in the photo as pigs and appended an iconic quote from George Orwell’s “Animal Farm”: “All animals are equal. But some are more equal than others.”

And then Katz got fired.

Katz’s media colleagues are decrying the move. One Jerusalem Report writer, essayist and short story fiction writer, Haim Watzman, resigned in protest. A crowdfunding page launched Wednesday in support of Katz had raised more than $10,000 as of that night.

“Journalism, when done well, always angers some readers, and it is the duty of the newspaper or magazine’s editors and managers to stand by writers and other members of the staff when readers complain about the analysis and opinions expressed by its staff,” Watzman wrote Wednesday in an open resignation letter to Jerusalem Report editor Steve Linde. “This is all the more true in the case of editorial cartoonists, whose very job is satire — and a good satirist never pauses to worry about angering the citizenry.”

The cartoon also came under heavy criticism, mostly from the Israeli right, with comments calling it anti-Semitic for its depiction of Israeli Jewish leaders as pigs.

The pig imagery may be seen as decidedly unkosher, but it is a direct reference to Orwell’s allegory, in which a group of pigs foment socialist revolution on their farm and promise equality to all animals, only to quickly declare themselves the privileged species.

This isn’t the first time Katz has skewered Netanyahu using classic literature. A previous cartoon mocking the prime minister’s penchant for expensive cigars was captioned by a Rudyard Kipling quote. Two others have riffed off passages from “Alice in Wonderland” by Lewis Carroll. In one, Netanyahu’s embattled wife, Sara, is drawn as the villainous Queen of Hearts.

Avi Katz in The Jerusalem Report