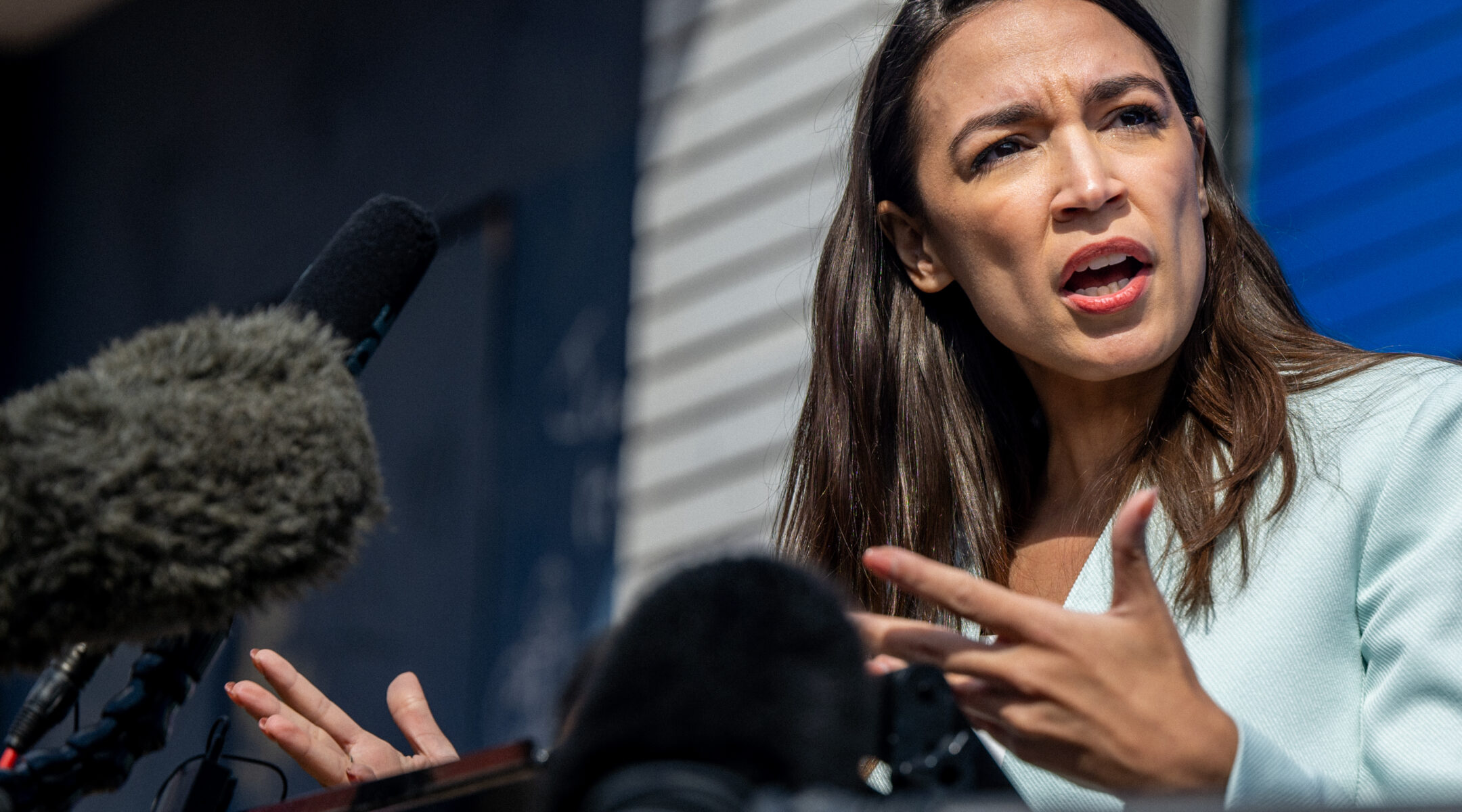 U.S. Rep. Alexandria Ocasio-Cortez speaks during a news conference at the 'Get Out the Vote' rally on In San Antonio, Feb. 12, 2022. (Brandon Bell/Getty Images)
Advertisement

Like Yente in the new Yiddish production of “Fiddler on the Roof” at the Museum of Jewish Heritage, The Immigrant Arts Coalition was trying to make a match — hold a conference on immigration and women’s empowerment at the museum and feature the future face of the Democratic Party, Alexandria Ocasio-Cortez.

It seemed like a simple shidduch. But — Miracle of Miracles — it turned out not to be a match made in heaven.

The National Yiddish Theater Folksbiene, which is currently performing “Fiddler on the Roof” at the museum and is listed as a co-sponsor of the conference, was not informed in advance that Ocasio-Cortez, the Democratic congressional candidate from the 14th CD and an outspoken critic of Israel, had been invited to speak next Sunday. The group’s chairman, Jeffrey Wiesenfeld, said he was informed by an irate board member whose neighbor learned of it from a flyer in the mail.

“Absent a public reassessment by Ms. Ocasio-Cortez of her unfair and extremist position [on Israel], she dishonors both the Immigrant Summit and the museum by her scheduled appearance,” Wiesenfeld said in a statement, describing her criticism of the IDF during the recent clashes at the Gaza border as a “blood libel.”

The irate board member, Minna Seiterlman, told The Jewish Week:

“Anti-Israel equals anti-Semitic to me. I don’t think she should have been invited. … My husband and I are overseers of the museum and I am a child of Holocaust survivors; my parents met in a concentration camp.”

Wiesenfeld, who described the museum as a “holy place that memorializes” those murdered in the Holocaust, stressed that the conference’s other co-sponsor, the Immigrant Arts Coalition, invited Ocasio-Cortez without his knowledge. A spokeswoman for the coalition declined comment.

“I personally do not like the idea that someone comes to a summit that has to do with everyone having equal rights — except [in her view] the Jewish people regarding Israel,” Wiesenfeld said.

He was referring to Orcasio-Cortez’s Twitter comments in May after 60 Palestinians were killed by the Israeli military while attempting to invade Israel by breaching the fence along the Israel-Gaza border. She wrote: “This is a massacre. I hope my peers have the moral courage to call it such. No state or entity is absolved of mass shootings of protestors. There is no justification. Palestinian people deserve basic human dignity, as anyone else. Democrats can’t be silent about this anymore.”

Hamas later acknowledged that 50 of the 60 killed at the fence were members of their terrorist organization.

Last month on the PBS program “Firing Line,” Ocasio-Cortez, 28, said: “I also think that what people are starting to see at least in the occupation … of Palestine [is] just an increasing crisis of humanitarian condition and that to me is just where I tend to come from on this issue. … I am a proponent of a two-state solution.”

She noted that her previous position on the Gaza clashes “is not a referendum on the State of Israel” and that she fully supports its right to exist.

“I am not the expert on geopolitics on this issue,” Ocasio-Cortez added later. “I just look at things through a human rights lens and I may not use the right words … Middle Eastern politics is not exactly at my kitchen table every night.”

Ocasio-Cortez’s campaign did not respond to several emails this week seeking comment.

Wiesenfeld said he Ocasio-Cortez had “enunciated a blood libel by designating members of the Israel Defense Forces, demonstrably amongst the most moral on earth, as murderers for defending the state against nihilistic terrorists, as ‘murderers’ and enunciating other assorted calumnies against the Jewish state.”

Ocasio-Cortez, a member of the Democratic Socialists of America, won the recent primary, upsetting 10-term incumbent Joe Crowley. The district spans Queens and the Bronx and she is expected to easily win election in the heavily Democratic district.

Judy Rosen, secretary of the board of the National Yiddish Theater-Folksbiene, said she too does not believe Ocasio-Cortez should speak at the summit, saying: “I don’t think she should have a platform at the museum because she does not understand the issues and is naïve. I don’t think she understands the issue of immigration or the Arab-Israeli situation. Before there is any discussion, she needs to be educated. This won’t be an opportunity to teach her because she will be speaking and looking for a lot of attention.”

But one prominent Jewish leader confided that such attempts have been made by major Jewish organizations in New York, as well as by Jewish elected officials, and they have not been successful.

But he also said he understands that the Jewish community is “not a priority” for her now.

“There is a lot of time until the election in November and between now and when she takes office in January,” he said. “I’m optimistic we will meet with her before then and I am hopeful [that we will] influence her on Israel. We need to educate her on the Jewish community of New York. Others who were also new to politics have gone through the same briefing.”

William Helmreich, professor of sociology at City College of New York, said he believes the museum, which declined all comment except to acknowledge it is the venue for the summit, “has a right to deny her the right to speak in its museum. Even if she doesn’t speak about Israel, it has the right to say that if people with anti-Israel views speak at the museum, the public might perceive the museum as endorsing the speakers’ public positions on the topic. If I were making the decision, I would only allow someone to speak on a controversial topic as part of a panel where the audience could hear opposing points of view and ask questions.”

Regarding charges that Ocasio-Cortez’s comments suggest she is anti-Semitic, Helmreich said it is “very difficult to determine whether or not a person who speaks against Israel is also anti-Semitic. It really depends on the context and one’s point of view. Zionists might feel that this means they believe Israel as a country has no right to exist. Palestinian nationalists might view it as supporting their exclusive right to Israel as a state.”

But the anonymous Jewish leader fumed over the charges that Ocasio-Cortez committed “blood libel” and is anti-Semitic, saying: “She will be in Congress for the next 50 years or more. She is only 28 and has a lot to learn. And to say she is anti-Semitic ….”

Ester Fuchs, director of the Urban and Social Policy Program at Columbia University’s School of International and Public Affairs, said Ocasio-Cortez’s appearance at the museum “provides the perfect opportunity for Ms. Ocasio-Cortez to learn more about the history of the Jewish community and the important role Israel plays in ensuring Jewish survival.”

“This conference is a good opportunity to open a good line of communication with her,” Fuchs added. “This is not the opportunity to be using incendiary language and creating more divisions. We need to have a conversation.”

She said she disagreed with the “language Ms. Ocasio-Cortez used to characterize Israel’s defense at the Gaza border,” but she was equally appalled at the “incendiary language” used by opponents of the candidate’s appearance.

“She will be the next congresswoman from Queens,” she said, “and it is incumbent upon leaders of the Jewish community to open up a serious conversation with her.”