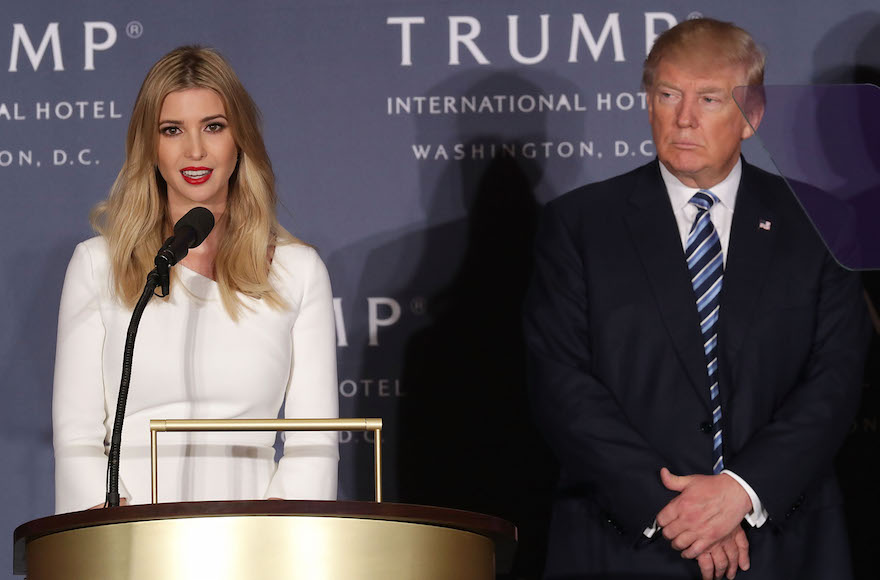 WASHINGTON (JTA) — Ivanka Trump said she does not believe the media are the “enemy of the people,” a departure from the rhetoric of her father, President Donald Trump, who has come under fire for repeatedly using the phrase.

Ivanka Trump, appearing Thursday at an event organized by Axios, a political newsletter, replied “No, I do not” when she was asked if she agreed with the phrase.

“I can share my own personal perspective,” she said. “I have certainly received my fair share of reporting on me personally that I know not to be fully accurate. So I have some sensitivity around why people have concerns and gripe especially when they sort of feel targeted. But no, I do not feel that the media is ‘the enemy of the people.'”

The publisher of The New York Times revealed this week that in a personal meeting with Trump, he warned the president that the use of the phrase – commonplace in authoritarian countries – was putting journalists at physical risk. Trump, however, stuck by his use of the phrase.

Ivanka Trump, who is an unpaid adviser to the White House, also said she saw the Trump administration’s separation of migrant families as a “low point” but she did not blame her father for the policy. Instead, like other Trump administration officials, she implicitly questioned the wisdom of the parents who bring their children to the U.S. border.

“That was a low point for me as well,” she said. “I feel very strongly about that, and I am very vehemently against family separation and the separation of parents and children.”

She noted that her mother, Trump’s first wife, Ivana, was an immigrant but added that “we are a country of laws.”

“We have to be very careful about incentivizing behavior that puts children at risk of being trafficked, at risk of entering this country with coyotes or making an incredibly dangerous journey alone,” she said. “These are not easy issues.”