Trump and his foreign policy team are on separate pages. What does it mean for Israel and Iran? 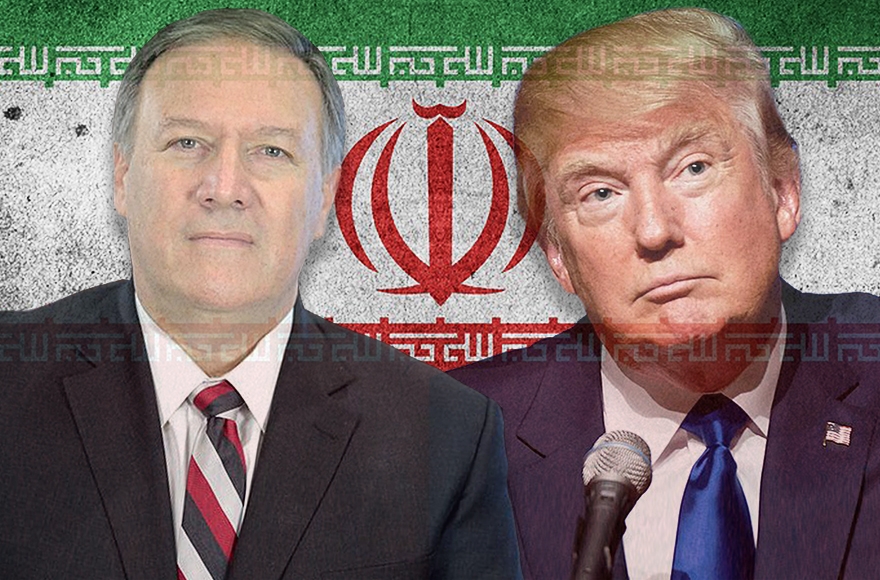 The disconnect of recent weeks was sharpened Monday when the White House announced the reimposition of sanctions on Iran, the first to be reintroduced since Trump announced in May that he was pulling out of the 2015 Iran nuclear deal.

Pompeo, speaking with the media on Sunday and heralding the new sanctions, insisted everything was as clear as day.

“So the president and I, too, have been very clear,” Pompeo said. “We’re very hopeful that we can find a way to move forward, but it’s going to require enormous change on the part of the Iranian regime.”

“Enormous change” was a reference to 12 conditions that Pompeo laid out in May after Trump quit the plan, which relieved sanctions on Iran in exchange for the rollback of its nuclear program. The conditions included an end to Iran’s enrichment of uranium (the 2015 deal allowed limited low enrichment, with some restrictions expiring within a decade), “unqualified access” for nuclear inspectors (under the deal, some inspections required a head’s up of several weeks, and Iran appeared ready to resist requests to inspect military sites), a cessation of Iran’s adventurism in the region as well as its ballistic missile program, and the release of all imprisoned Americans.

So those are preconditions for a new deal and not necessarily a meeting, right?

“No preconditions, no, they want to meet I’ll meet, anytime they want,” Trump said July 30.

Pompeo said two hours later on CNBC: “We’ve said this before. He wants to meet with folks to solve problems. If the Iranians demonstrate a commitment to make fundamental changes in how they treat their own people, reduce their malign behavior, can agree that it’s worthwhile to enter into a nuclear agreement that actually prevents proliferation, then the president said he’s prepared to sit down and have the conversation with them.”

So what gives? We canvassed Iran experts.

Jason Brodsky, the policy director for United Against Nuclear Iran, a group that opposed the Joint Comprehensive Plan for Action, or JCPOA, the name of the Iran deal, said Trump was a businessman learning how to be a politician and a diplomat.

“I think the president believes he has the ability by virtue of his personality and negotiating experience to be the great negotiator and to close deals he thinks are strong for the United States,” Brodsky said.

Since July 30, Trump appears to have retreated from the “no preconditions” posture.

“Iran, and its economy, is going very bad, and fast!” he posted on Twitter over the weekend. “I will meet, or not meet, it doesn’t matter — it is up to them!”

Iran, and it’s economy, is going very bad, and fast! I will meet, or not meet, it doesn’t matter – it is up to them!

“I think after reflection this tweet is an effort to clean up or clarify it’s up to Iran and the ball is in their court,” Brodsky said.

National Security Adviser John Bolton spoke Monday morning on the Fox News Channel as the announcement came that new sanctions would roll out at midnight. He suggested that Trump’s offer to meet was a means of calling the Iranian bluff.

“They flatly turned him down and I think that’s an indication they’re not serious about stopping their malign behavior,” Bolton said.

Bolton apparently was referring to a televised address Monday in which Iranian President Hassan Rouhani said that any meeting would be contingent on the United States rejoining the JCPOA.

“If you stab someone with a knife and then you say you want talks, then the first thing you have to do is remove the knife,” Rouhani said, according to Reuters.

Mark Dubowitz, the director of the Foundation for the Defense of Democracies, said Trump’s gambit paid off.

“He saw it as a way of throwing the Islamic Republic off balance,” Dubowitz said. “They rejected it and did not know how to respond.”

Except maybe it’s the Iranians who are on a learning curve. Later Monday, Rouhani told Iranian television that in fact he was ready to meet without preconditions.

“I don’t have preconditions,” he said, according to CNN. “If the U.S. government is willing, let’s start right now.”

It was Bolton, told of Rouhani’s 180, who seemed to be off balance.

“Let’s see what comes of it and see if it’s just propaganda,” Bolton said Monday afternoon on CNN. “If the Iranians are really willing to come and talk about all of their malign behavior in the region and around the world, I think the president is willing to do it.”

Jarrett Blanc, the former State Department coordinator for Iran nuclear deal implementation, said Trump’s actions only made sense when seen through the lens of personality, not policy.

“The only way to understand how the Trump administration has handled the JCPOA is that President Trump hated the deal because it was concluded by his hated predecessor” Barack Obama, said Blanc, who now works with Diplomacy Works, which backs the JCPOA.

That, Blanc said, led the president’s aides to scramble to explain the policy: Hawks like Bolton and Pompeo seized on the pullout to advance a regime-change agenda. Others — apologists for Trump’s erratic behavior — cast it as Trump’s style, depicting him as the guy who is always ready to make a deal.

“This administration has been forced into ex-post facto rationalization,” Blanc said.

Dubowitz disagreed, saying Trump’s toughness on Iran was of a piece with his advisers.

“Iran policy is one of the few areas in the administration where there is consistency and coherence, and there is no daylight between the president and his principals on objectives and tactics,” he said.

The sanctions to be reimposed at midnight target Iran’s currency, its trade in gold and other minerals and mineral byproducts, and Iran’s automotive sector.

On Nov. 5, much tougher sanctions come into play targeting Iran’s ports, its oil and its financial system.

On the horizon are new tensions between the Trump administration and Europe, already exacerbated by Trump’s imposition of tariffs. The reimposed sanctions target third-party entities that trade with Iran. (Under U.S. law, U.S. trade with Iran is practically nil). Europe stands by the JCPOA, and on Monday announced measures to protect European companies that deal with Iran.

Israeli Prime Minister Benjamin Netanyahu commended Trump for the reimposition of sanctions and called on European nations to follow his lead.

“This is an important moment for Israel, the U.S., the region and the entire world,” Netanyahu, who vigorously opposed the JCPOA, said in a statement. “It represents the determination to curb Iran’s aggression in the region and its ongoing intention to arm itself with nuclear weapons. I call upon the countries of Europe, which talk about stopping Iran, to join this measure.”

There is one major event bringing the United States and Iran into the same building between now and Nov. 5: the U.N. General Assembly in September. Trump last year reportedly sought a meeting with Rouhani at last year’s G.A.; will it happen this year?

Judging from the about-faces that have taken place in the space of a week, it’s too soon to predict.