Israel is suspected again of assassinating an enemy’s rocket scientist. Do these killings pay off? 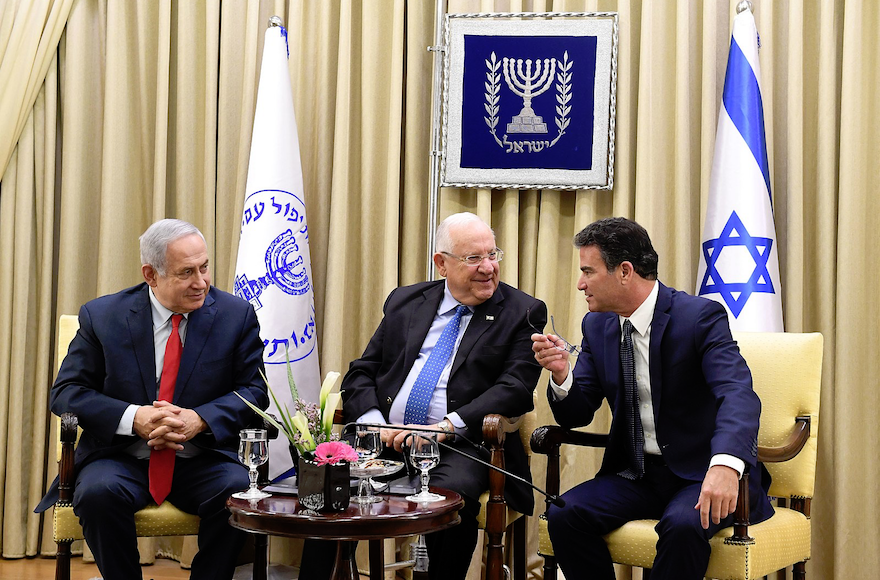 WASHINGTON (JTA) — Aziz Asbar was a leading Syrian rocket scientist, working with Hezbollah and Iran to develop systems that could reach deep inside Israel. Now he’s dead, blown up in a car.

The natural inclination in the Middle East and even farther afield is to blame the Mossad, Israel’s intelligence agency, for such killings. Indeed, Mossad was named as the perpetrator in a New York Times story on Monday evening.

The Times cited “a senior official from a Middle Eastern intelligence agency” in reporting Asbar’s death on Saturday in Maysaf, which is near a major Syrian weapons development facility. It also reported that it was at least the fourth assassination attempt by Israel in three years against an enemy weapons engineer on foreign soil.

The Mossad hardly ever confirms its operations, which the prime minister must approve. An exception came in April when Prime Minister Benjamin Netanyahu extolled an operation in which Israeli agents stole a literal ton of documents from Iran related to its nuclear program.

But that operation, as far as anyone knows, did not involve a killing. Another, in Kuala Lumpur the same month, did: Two motorcyclists shot dead a Hamas associated engineer, Fadi al-Batsh.

These assassinations once were the stuff of major headlines and books — like Operation Damocles, which in the early 1960s targeted German scientists who were developing missiles for Egypt. Now such killings merit an article, if that, and a cursory mention on a Wikipedia page.

“Every day in the Middle East there are hundreds of explosions and settling of scores,” Defense Minister Avigdor Liberman told Israel’s Channel 2 after Asbar’s killing. “Every time they try to place the blame on us. So we won’t take this too seriously.”

This is likely, in part, because the volume has increased.

Ronen Bergman, the Israeli reporter who last year wrote an exhaustive history of Israel’s assassinations titled “Rise and Kill First,” and who co-wrote The Times scoop on Asbar, has reported that before 2000, Israel carried out 500 such operations since its founding. Since then, there have been more than 1,800. Israel, Bergman wrote in his book, “has assassinated more people than any other country in the Western world” in the postwar period.

Scott Lasensky, a former senior adviser on Israel to the Obama administration, said the acceleration after 2000 was due in part to the intensity and bloodiness of attacks on Israeli civilians of the second intifada launched in 2000, as well as the George W. Bush administration’s pivot to targeted assassinations after the 9/11 terrorist attacks in 2001.

Whereas before “there had been some public discussion about whether they could backfire, across the national security community and in the broader public, the debate ended,” said Lasensky, now a visiting scholar at Israel’s Institute for National Security Studies. “Because it coincided with America’s post-9/11 campaign, it gave Israelis even less reason to question.”

Bergman’s book comes from an injunction in the Talmud that he repeatedly heard cited by the former officials he interviewed: “If someone comes to kill you, rise up and kill him first.” If the death of a figure would keep others alive, it is a no-brainer, according to this rationale: He must die.

Asbar could be in that category. According to The Times report, he was a critical actor in developing precision-guided missiles that could reach deep into Israel and in stabilizing rocket fuel. With Syria’s Assad regime and its allies – Iran and its allied Lebanese militia, Hezbollah – emerging triumphant in that country’s civil war, Israel suspected that it would be the only logical target for such firepower.

A famous ticking bomb assassination was Imad Mughniyeh in Syria in 2008, believed to be a CIA-Mossad effort. The Bush administration blamed Mughniyeh, the Hezbollah chief of operations, for attacks on U.S. troops in Iraq.

Another was Yahya Ayyash, “The Engineer,” the Hamas designer of a rash of bombs that devastated Israel in the mid-1990s. His head was blown off when he answered a cellphone call in Gaza City.

Be nervous, be very nervous

Strategic killings keep the enemy off-balance — likely the key factor informing those of four Iranian nuclear scientists in the early part of this decade.

Jonathan Schanzer, the vice president of the Foundation for Defense of Democracies, said the killings not only deprived Iran of its knowledge base, it made the Iranian security establishment expend resources on protecting its scientists.

“It forced the Iranians to engage in greater operational security, holding scientists in underground undisclosed facilities because of the fear they would lose their brain trust,” he said.

The same likely is now true of Syria’s rocket makers.

“They will be more paranoid,” Schanzer said. “That’s what counterterrorism is, encumbering the enemy, not necessarily defeating the enemy.”

Some of the alleged Israeli killings have seemed gratuitous.

Bergman chronicles the late Israeli defense minister and prime minister Ariel Sharon’s obsession with killing Palestinian leader Yasser Arafat, at times contemplating operations that would have killed large numbers of civilians and qualified as war crimes. (Younger officers thwarted the plans.) Arafat managed to escape multiple bombings — often by minutes — and even a bizarre “Manchurian Candidate”-style bid to hypnotize a Palestinian into killing him. (The Palestinian pretended to be under hypnosis, then promptly turned himself in to Arafat’s people.)

Bergman, who hints in a New York Times Magazine excerpt of his book that Sharon may have ultimately succeeded in poisoning Arafat in 2004, said Sharon was simply furious that a man behind the killing of Israeli civilians should keep breathing.

“He took to heart every casualty of every terror attack,” Bergman quoted the late Mossad chief Meir Dagan as saying of Sharon. “There were some things that he simply could not let pass.”

Revenge likely also was a factor in the case of Ahmed Yassin, the Hamas founder and cleric killed in an airstrike in March 2004. Yassin was Hamas’ spiritual leader, given to vile justifications of the murder of Israelis, but he was not involved in its operations.

Does the plan work?

Sometimes it backfires. The attempts on Arafat fed his legend and lent him stature among Palestinians. Israeli commandos in 1988 killed Khalil al-Wazir, also known as Abu Jihad, in Tunis in 1988. Abu Jihad, Arafat’s second-in-command, also was among the Palestinian leaders seeking accommodation with Israel. The killing did nothing to stop the first intifada. Israeli leaders believed that Abu Jihad was directing its violence, but it was a homegrown affair.

Other times, when a critical actor is killed, it appears to have results. The 1996 assassination of Ayyash, “The Engineer,” was followed by a rash of bus bombings believed to have been planned before his death – and then several years of relative quiet.

Schanzer said the policy may work in conjunction with an overall strategy. The campaign against Iran’s nuclear scientists, he said, was coupled with cyber warfare that for a time crippled Iran’s uranium enrichment and tough sanctions that slowed its nuclear program.

“Israelis have always used targeted assassination as not the only means but as one element of a broader strategy,” he said.