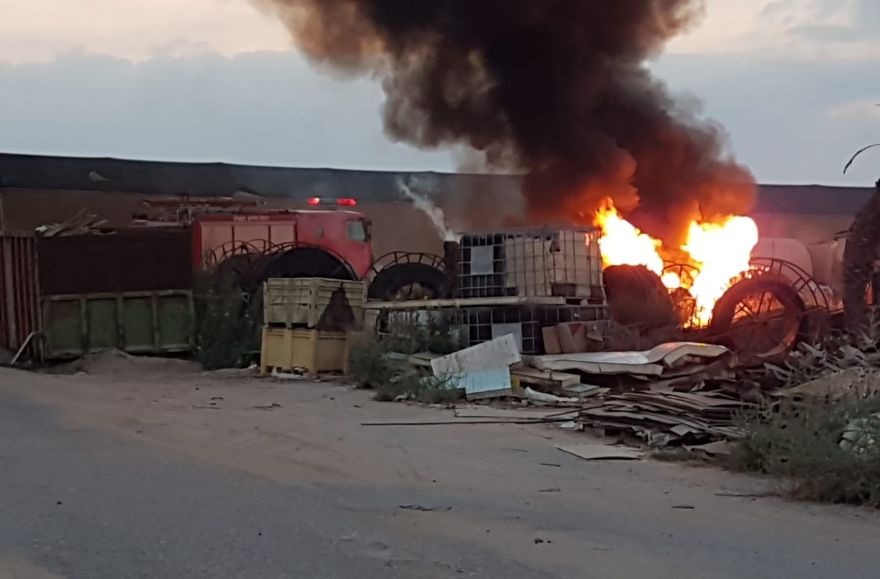 A factory in the southern Israeli city of Sderot hit by a rocket launched from Gaza on Aug. 9, 2018. (Courtesy/The Israel Project)
Advertisement

JERUSALEM (JTA) — Israelis living in southern Israel spent Wednesday night and into Thursday morning in bomb shelters as more than 150 rockets were launched from Gaza, spurring retaliatory strikes from Israel.

One woman, a foreign worker from Thailand, was seriously injured early Thursday morning when one of the rockets hit a home in a community on the border with Gaza. By Thursday afternoon she had regained consciousness and was taken off a respirator. Several other homes and factories, as well as cars, were damaged after being hit by rockets and shrapnel.

The Israel Defense Forces responded into Thursday morning with airstrikes on over 140 Hamas military targets in Gaza, including weapons production facilities and storage warehouses, as well as training facilities, the IDF said in a statement.

The Iron Dome missile defense system intercepted 25 of the rockets heading toward populated areas, and most of the others landed in open areas.

After a night taking shelter from the rockets, residents of southern Israeli communities were forced back to shelter again as dozens more rockets were fired between 6:30 a.m. and 8:30 a.m.

According to instructions from the Israel Defense Forces, trains were canceled in Israel’s south between Sderot and Ashkelon, and farmers were barred from working in their fields. All summer camps were canceled, as well as any gatherings of 300 or more people.

“After a night of more rockets we don’t see an end to the escalation. We are closing in on operation in Gaza,” an unnamed senior military officer said  Thursday. He said Hamas has been on a course of “conflict and friction” since late March.

The Health Ministry in Gaza said that a pregnant woman and her young daughter were killed in the airstrikes, as well as a 30-year old son of a Hamas military commander.

Hamas had threatened an escalation after Israel fired Tuesday on a Hamas military post in northern Gaza in response to the shooting at Israeli troops from there. Two Hamas operatives were killed. It later emerged that the bullets fired at the Israeli troops were errant fire from a Hamas training exercise, which Israel acknowledged after an investigation.

“Hamas regime again is launching rockets at Israeli communities,” he wrote. “Another night of terror & families huddling in fear as Israel defends itself. This is the Hamas regime’s choice. Hamas is subjecting people to the terrifying conditions of war again.”

The rocket barrage came after a report by the Turkish Anadolu Agency citing an unnamed Hamas source that Israel and Hamas will officially unveil a long-term truce deal at the end of the month.

Hamas regime again is launching rockets at Israeli communities. Another night of terror & families huddling in fear as Israel defends itself. This is the Hamas regime’s choice. Hamas is subjecting people to the terrifying conditions of war again.