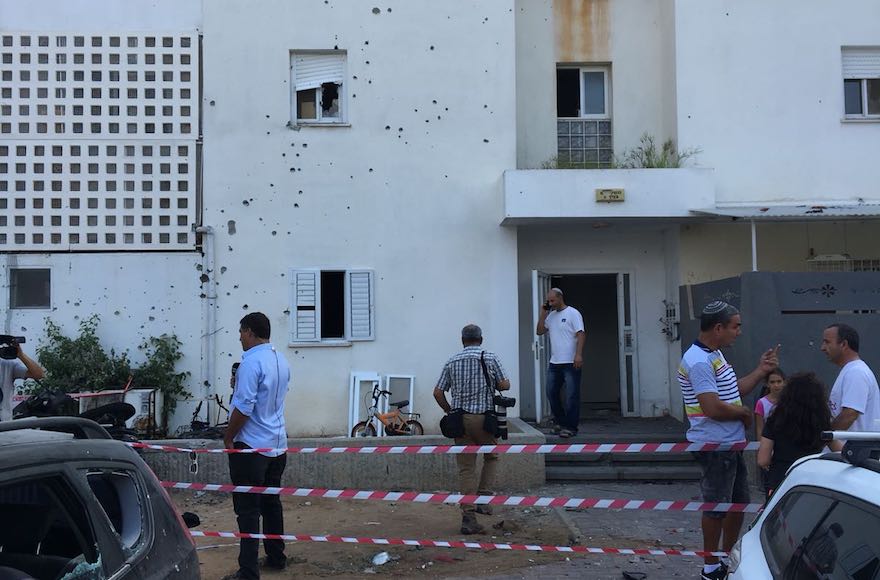 Buildings and cars in Sderot, Israel, were damaged from rockets fired from Gaza on Wednesday. (Courtesy of the Israel Project)
Advertisement

JERUSALEM (JTA) — After firing more than 180 rockets into civilian areas, armed terror groups in Gaza said Thursday afternoon that they would refrain from firing on southern Israel if Israel also maintains the calm.

Shortly after the announcement, however, more rockets were fired from Gaza at Israel. Code Red rocket alert sirens were sounded as far away from the Gaza border as Beersheba, the first time that sirens have gone off in the city since the 2014 Gaza War. At least two rockets exploded in open areas near Beersheba.

The firing of rockets from Gaza and retaliation by the Israel Defense Forces led U.S. Middle East peace envoy Jason Greenblatt to suggest in a tweet that the Hamas leaders in Gaza were leading the Gazan Palestinians to the brink of war. ““Hamas regime again is launching rockets at Israeli communities,” he wrote. “Another night of terror & families huddling in fear as Israel defends itself. This is the Hamas regime’s choice. Hamas is subjecting people to the terrifying conditions of war again.”

An IDF official also suggested that Israel could get into another war with Gaza over the attacks.

“After a night of more rockets, we don’t see an end to the escalation. We are closing in on operation in Gaza,” an unnamed senior military officer said  Thursday. He said Hamas has been on a course of “conflict and friction” since late March.

As of Thursday afternoon, more than 180 rockets had been fired from Gaza into Israel, with 30 intercepted by the Iron Dome missile defense system.

One woman, a foreign worker from Thailand, was seriously injured early Thursday morning when one of the rockets hit a home in a community on the border with Gaza. By Thursday afternoon she had regained consciousness and was taken off a respirator. Several homes and factories, as well as cars, were damaged in southern Israeli communities after being hit by rockets and shrapnel.

The IDF targeted over 150 Hamas military sites in response, including weapons production facilities and storage warehouses, as well as training facilities, the IDF said in a statement.

Defense Minister Avigdor Liberman on Thursday spoke with the leaders of the southern Israeli communities under fire and told them the Israel Defense Forces would do whatever it takes to end the attacks from the Gaza Strip, according to the Defense Ministry.

The Gaza military command center was quoted on Thursday afternoon as announcing that the “current escalation in Gaza has ended,” according to Al-Jazeera.

“The resistance responded to the enemy’s crimes in Gaza,” it said. “The continuation of calm in Gaza depends on the occupation’s behavior.”

Hamas had threatened an escalation after Israel fired Tuesday on a Hamas military post in northern Gaza in response to the shooting at Israeli troops from there. Two Hamas operatives were killed. It later emerged that the bullets fired at the Israeli troops were errant fire from a Hamas training exercise, which Israel acknowledged after an investigation.

“The way things continue to play out is significant,” the IDF said in a tweet. “Hamas will understand in the coming hours, as in the past months, that this is not the direction it wants to choose.”

A meeting of Israel’s Security Cabinet was scheduled to be convened Thursday evening at the Defense Ministry’s headquarters in Tel Aviv.

A hot-air balloon festival scheduled to be held over the weekend at the Habsor National Park near the border with Gaza was canceled.