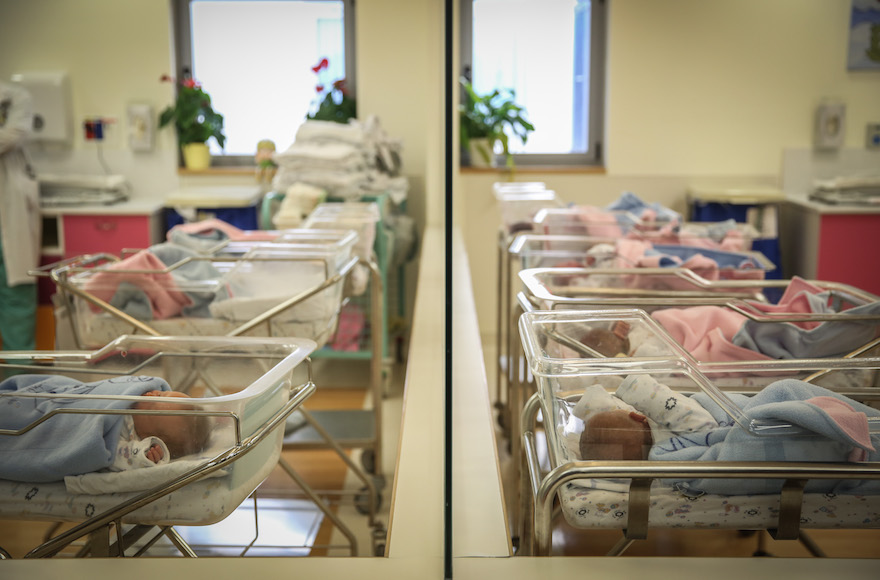 (JTA) — Several hospitals in Israel have reported record-breaking numbers of deliveries of newborns.

Maternity wards in most of Israel’s hospitals are at capacity, with some mothers being referred to other departments and others having their babies delivered in hallways, Ynet reported Thursday.

The uptick is connected to rising fertility rates and the fact that there is a significantly higher number of births during the summer months compared to winter, according to the report. August is typically the month with the most births.

Soroka Hospital in Beersheba broke its record for births in a month with 1,518 deliveries in July, slightly more than the 1,510 in July last year. The record number is nearly a 10 percent increase over the average of 1,395 births recorded there during the month of July over the past six years. Soroka has approximately 17,000 births annually; Shaare Zedek Medical Center in Jerusalem has been delivering more than 22,000 babies a year on its two campuses.

Two other hospitals also set records for July: Ichilov in Tel Aviv and Haemek in Afula.

Ichilov, which had the second-largest number of births, saw 1,014 births in July – a nearly 10 percent rise above its monthly average of 916 births. It opened a new maternity ward last month with 51 private rooms and a new infant department.

Haemek is among the smaller hospitals that also witnessed a noticeable increase. It had 392 births in July, compared to 341 in that month last year.

The average fertility rate within the OECD is 1.7 children per mother.