Does ‘Three Identical Strangers’ Play Fair With Its Audience? 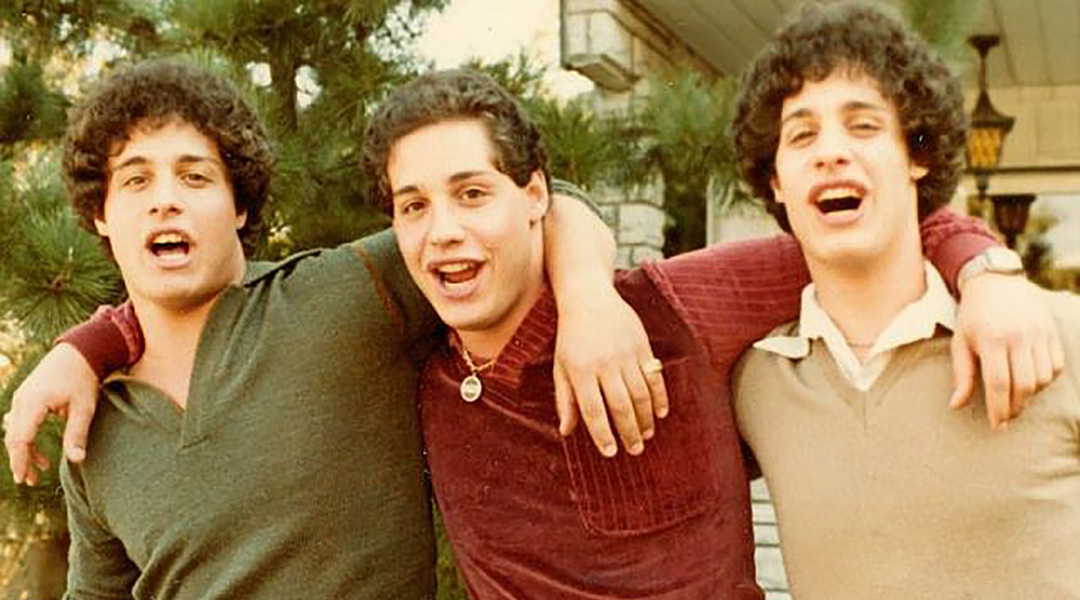 “Three Identical Strangers” is a documentary about triplets separated at birth by a Jewish-affiliated adoption agency in 1961. (JTA)
Advertisement

This story of three triplets, reunited as teenagers after having been separated at birth, is certainly bravura, gripping filmmaking. But I’m not sure I found the dark revelations in the film as “unnerving” as most, or at least not in the ways intended by the filmmakers.

To recap (and spoilers ahead), the documentary recalls a tabloid-friendly story from the early 1980s, when identical triplets David Kellman, Bobby Shafran and Eddy Galland discovered one another’s existence through a series of coincidences. The three briefly became media darlings, with Phil Donahue and Tom Brokaw, among many others, eager to share the genuinely moving story of how the boys had been put up for adoption at the Louise Wise adoption agency in New York and separately placed in blue collar, middle class and upper middle class Jewish homes.

The long-lost brothers immediately bond and entertain audiences with stories of all they have in common: They smoke the same cigarettes, all became wrestlers, each has the same taste in women (whatever that means). Two of the brothers, now in their mid-50s, appear on camera to describe, in honest and moving terms, their whirlwind reunion and the ensuing media frenzy.

Then the film takes a turn when we learn how the parents of the boys began to ask questions about the adoption agency and why they were never informed that the boys were in fact triplets. Bobby and David describe the frequent visits from researchers (the parents were told they were chosen for a psychological study), who would film each boy as he played and solved a series of cognitive and behavioral tests. This went on for years.

Slowly it turns out that the Louise Wise agency, working at the behest of the Manhattan-based Child Development Center, had intentionally separated the children as part of a longitudinal study being conducted by the head of the center, a legendary Freudian named Peter Neubauer. The Austrian-born, Jewish psychiatrist appeared to have been seeking to understand the connections between nature and nurture. The triplets and a number of other multiples were placed in homes deliberately chosen for their economic diversity, and the children’s progress was tracked over a number of years.

Disturbing questions are asked as the film proceeds. Why weren’t the parents told the truth about the psychological experiment into which they had been dragooned? Why were the results never made public? How could a Jewish-run agency (the Child Development Center is affiliated with the Jewish Board of Family and Children’s Services), fewer than two decades removed from the Holocaust, agree to a study with such creepily manipulative implications? And what psychological damage was inflicted on the boys, all of whom showed signs of deep separation anxiety and erratic behavior during their childhoods?

Galland committed suicide in 1995; Shafran was charged in the 1978 slaying of an elderly woman during a robbery and was acquitted on what a contemporary report called a technicality. Growing up, each of the triplets spent time in psychiatric hospitals.

The anguish of the surviving triplets and their relatives is undeniable and deeply regrettable. But the film also stacks the deck in a number of ways. The boys were born in 1961, before the era of open adoptions and when state and private agencies could still assert a high degree of patronizing power over their charges and their guardians. The film fails to mention this, which invites the reader to judge the actions of the Louise Wise agency and the Jewish Board against modern standards of accountability.

Neubauer is the villain of the film. Long dead, he is depicted as a cold-hearted Strangelove with vaguely eugenicist impulses. (It doesn’t help his case that one of the surviving research assistants nervously giggles as he recounts his work with the triplets.) Bobby says, “This is, like, Nazi shit.”

The film also depicts Neubauer’s study as unique — and uniquely sinister– when in fact there are a number of studies exploring the similarities and differences of twins raised in separate environments. Journalist Lawrence Wright, who was a consultant on the film and appears as a main talking head, wrote a book about such studies. The book acknowledges that the history of twin research was “one of the most appalling chapters in science” and was “taken to its evil extreme by Nazi eugenicists.”

But in the 1995 New Yorker article on which the book was based, Wright describes the Neubauer study with little of the negative judgment implied in the movie. He’s entitled to a change of heart; at the very least, the film could have acknowledged how ethical standards changed between 1961 and the present day.

The film also demonizes the Jewish Board, describing it more than once as an agency connected to unnamed political power brokers. (Today it is a sprawling social service agency serving a nonsectarian clientele. The agency has put out a statement saying it “does not endorse the study undertaken by Dr. Peter Neubauer and is appreciative that the film has created an opportunity for a public discourse about it.”)

Yes, dividing the triplets among three families, each carefully chosen by class and other factors (all three boys had older, adopted sisters, presumably as controls), was underhanded and imperious. But aren’t all adoptions in some way manipulative? Children aren’t assigned by lottery. Agencies look for the right fit and routinely make matches based on a range of subjective criteria. The current practice among adoption agencies is to never split up twins. Was this the standard in 1961? The film should have told us one way or another.

The film also cheats a bit on the central issue of the twins study itself: nature vs. nurture. As Wright himself once wrote, “These days, even the most dogmatic environmentalist is willing to admit that nature influences nurture. The debate has evolved into a statistical war over percentages — how much of our personality or behavior or intelligence or susceptibility to disease is attributable to our genes, as compared with such environmental factors as the family we grow up in or the neighborhood we live in or how long we attend school.”

At one point the film suggests that the boys’ mental health challenges would have been better addressed had the families had a better understanding of their birth mother’s medical history. An ominous montage depicts the boys as anguished children and strongly implies that Eddy’s suicide was biologically determined. But the film later shifts gears and seems to place an inordinate amount of blame on Eddy’s adoptive father, a self-described strict disciplinarian who appears haunted by what he might have done differently as a father.

Don’t get me wrong: The triplets’ story is one that deserves to be told, and their anger, hurt and unanswered questions need to be aired and addressed. The film has sparked some progress in unlocking 10,000 pages of the study that had been stowed away at Yale under a decades-long embargo. Newsweek reports that Shafran and Kellman received a letter of apology from the then-president of the Jewish Board, Alice Tisch.

But for all its ethical lapses and ugly deceptions, Neubauer’s twin study seemed to be seeking answers to questions that have long bedeviled psychologists, parents and policymakers: Do individuals have free will, or are they prisoners of their environments or DNA? What kinds of parenting, prevention and early intervention are effective in managing a mental health issue? How to save the mentally ill from a fate like Eddy’s is exactly what Neubauer wanted to find out.

“Three Identical Strangers”is a cautionary tale about researchers who lost sight of the humanity of their subjects. It would have been even more powerful if it were told with more nuance.