Ben Shapiro challenged Alexandria Ocasio-Cortez to a debate. When she refused, things got weird. 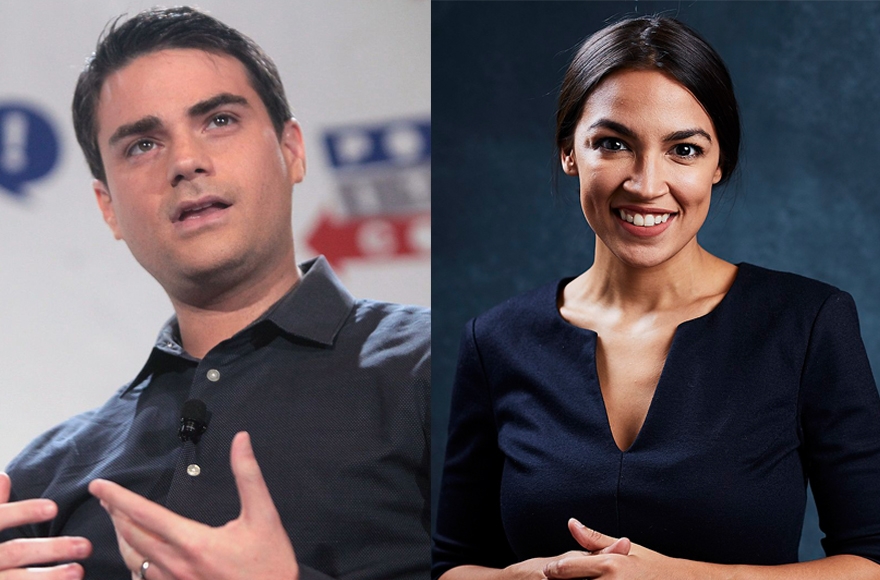 Ben Shapiro, left, offered $10,000 to a charity of Alexandria Ocasio-Cortez's choice or her campaign if she agreed to debate him. (Wikimedia Commons)
Advertisement

Hey, @Ocasio2018, what do you say? pic.twitter.com/lKDtmMc8Us

Shapiro offered $10,000 to a charity of Ocasio-Cortez’s choice or to her campaign if she took him up on his offer. He said the congressional candidate had accused Republicans of being afraid to debate, and here he was ready to debate.

(I could not, in a quick internet dive, come up with instances of Ocasio-Cortez decrying Republican cowardice. I did find an account of her debate strategy in The New Yorker in an article about her successful primary unseating of veteran Democratic Rep. Joe Crowley. She kept showing up for debates. He bailed twice, and the one time he showed up, she whomped him, at least according to the admiring David Remnick.)

If there were a debate, you could probably count on Shapiro, a prominent Israel defender, to challenge Ocasio-Cortez on her harsh criticism of Israel. She described the day in May when Israeli troops killed more than 60 Palestinians, mostly Hamasniks, some of whom were attempting to breach the fence with the Gaza Strip as a “massacre.”

Ocasio-Cortez did not have to reply: No one expects a candidate to debate non-candidates, and her from-the-left appeal is based much more on getting out the vote than it is on persuading undecided independents or hostile conservatives.

But reply she did on Thursday, and in the process advanced a jarring simile: Shapiro’s very polite debate challenge, she said, was akin to catcalling.

“Just like catcalling, I don’t owe a response to unsolicited requests from men with bad intentions,” she tweeted.

Just like catcalling, I don’t owe a response to unsolicited requests from men with bad intentions.

And also like catcalling, for some reason they feel entitled to one. pic.twitter.com/rsD17Oq9qe

That prompted a new round of conservative outrage, accusing Ocasio-Cortez of playing the gender card.

“Crying sexism in order to avoid a debate of ideas is not a feminism I want any part of,” said Erielle Davidson, a contributor to The Federalist and TownHall.

Crying sexism in order to avoid a debate of ideas is not a feminism I want any part of.

John Podhoretz, the editor of Commentary, seized on Ocasio-Cortez’s claim that Shapiro’s challenge was based on “bad intentions.”

What bad intentions? A serious discussion that raises money for charity? This is just embarrassing. https://t.co/EfYdiDWSLm

And then it was Shapiro’s turn to get weird: He advanced his Orthodox Judaism as a defense against intimations that he was harassing her, when “challenging you to a debate is not harassment” would have worked just fine.

But sure, go with “the Orthodox Jew who has never catcalled a woman in his life is ACKSHUALLY a sexist catcaller for asking for a discussion or debate.” I’m sure your media sycophants will eat it up.

And frankly, this comparison is offensive. @benshapiro is a happily married man. Catcalling involves hitting on someone. He’s invited you to…. a debate. This isn’t complicated

Carol Costello, an anchor on CNN’s Headline News Network, had enough. Quoting Shapiro’s “but I’m Orthodox” tweet thread, she admonished, “Sigh. Seriously Ben this is a silly stunt.” (Costello hosted Shapiro for a friendly and sympathetic interview when leftist protesters tried to drive him away from a lecture last year at the University of California, Berkeley.)

Lewinsky, who knows from trouble and male attention, weighed in by calling Ocasio-Cortez a “badass.”