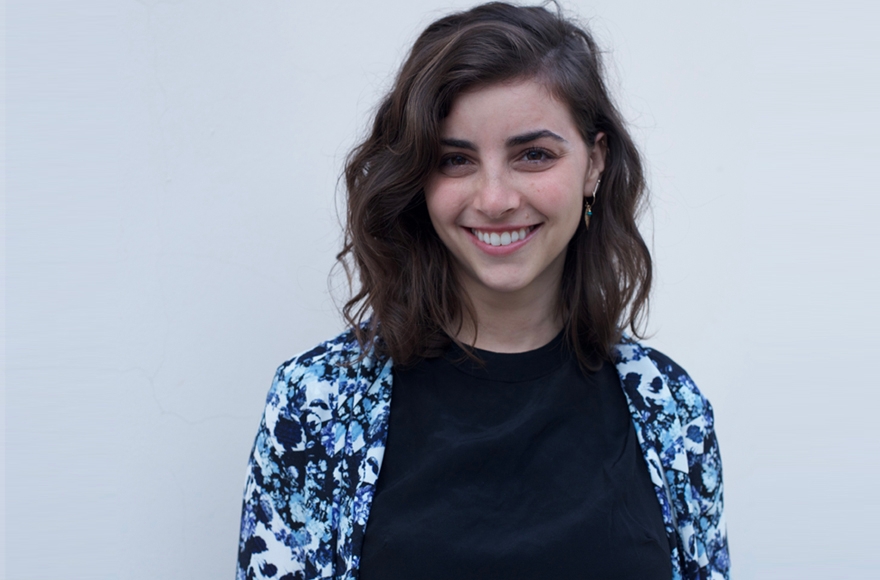 Simone Zimmerman, a leftist activist, lives in Israel on a work visa. (Courtesy of Zimmerman)
Advertisement

(JTA) — For years, Simone Zimmerman has protested Israel’s actions from the left. She’s led activist groups, organized protests and gone on camera. But she never worried that her activism would get her barred from entering the country — until this week.

Zimmerman, who is Jewish and lives in Israel on a work visa, was returning from a vacation in the Sinai Peninsula on Aug. 5 when she found herself held up at the passport check. What was usually a routine two-minute interaction turned into an hour of answering personal questions and waiting.

Soon, she and a friend, Abby Kirschbaum, were sitting on benches outside a back office talking to a security agent — and being questioned about their political activism.

Why did you come here to work with Palestinians, the agent asked, according to Zimmerman. Why not Jews? Who do you protest with? What are their names? Have you ever participated in violent protests? What do you think of Benjamin Netanyahu?

“She was very intentionally trying to get me to name names of Palestinians, which I didn’t,” Zimmerman, 27, told JTA, referring to an agent who questioned her. “The interview wasn’t about my political opinions, it was about my work with Palestinians and why I do that work. It was repetitive. It was compulsive.”

Zimmerman told the agents that she did not participate in any violent activism. After four hours of questioning by four people, she and Kirschbaum were free to go.

It’s at least the third time in the past month that American Jews have been stopped at Israel’s borders and questioned by security personnel about their nonviolent activism or visits to Palestinian areas. A week before Zimmerman and Kirschbaum’s detainment, another leftist activist, Moriel Rothman-Zecher, was detained for three hours at Ben-Gurion Airport as he entered Israel. Two weeks earlier, Meyer Koplow, a prominent American Jewish philanthropist, was questioned before leaving the country after a fact-finding tour that included talks with Palestinians.

Israeli officials say the questioning is just a matter of security, ensuring that those entering the country are not militant extremists or, in Koplow’s case, carrying something dangerous in their luggage. The officials insist they are not interested in political stances or opinions of Israel’s prime minister.

While the activists were all questioned by border personnel, the agents conferred with the Shin Bet, Israel’s internal security service, which dictated questions to ask. The Shin Bet says it was primarily interested in whether the activists had participated in violent rallies.

“The Shin Bet did not seek to ask the travelers about their opinions of diplomatic officials, and did not seek to clarify anything regarding their political positions,” according to a Shin Bet statement. “It should be stressed that the Shin Bet operates exclusively according to its legal purpose and on behalf of the security of the state. Any attempt to attribute other motives to it is a baseless smear.”

A statement from the Population and Immigration Authority also said that the agents did not ask Zimmerman or Kirschbaum any political questions, and that Zimmerman volunteered her opinion of Netanyahu. The statement said Zimmerman was initially questioned because of previous issues with her visa.

But the detained activists stand by their accounts. They all say that at least some of the questions were political and that the experience was jarring. In light of recent Israeli laws targeting left-wing groups critical of the government, they worry that the country’s border security has begun extending to interrogation of dissent and intimidation of the left.

Zimmerman, Kirschbaum and Rothman-Zecher are all young left-wing activists opposed to Israel’s occupation of the West Bank and its treatment of Palestinians.

Koplow has been a lay leader at mainstream, traditional Jewish institutions, and was questioned following a tour of the West Bank with Encounter Programs, a nonpartisan organization that brings Jews to Palestinian areas to meet the people and see their society firsthand. (This reporter also was on that tour.) Koplow believed he was questioned after security personnel found a brochure in his luggage titled “This Week in Palestine,” which he had picked up in a Bethlehem hotel lobby.

“It’s just an example of how they decide who is kosher and who is not, and who is to be harassed and scared and talked to in bizarre ways at the border,” said Rothman-Zecher, 28, an author who was born in Israel and was taking his infant daughter on her first trip there. “It doesn’t make things morally worse, it just makes things scarier and sadder and more threatening.”

Rothman-Zecher related a similar experience to that of Zimmerman and Kirschbaum. Upon handing over his passport, he was told to wait as his wife and baby went ahead. Two hours later, he says a Shin Bet officer who gave his name as “man” (“gever” in Hebrew) asked him a series of questions about his history and activism.

Had he served in the Israel Defense Forces? (No, he was a conscientious objector.) Have you ever been arrested? (Yes, during a nonviolent protest in Hebron.) Who did you protest with? (Various groups.) What are some names of activists you’ve worked with? (Didn’t say.)

Rothman-Zecher says the agent was friendly, even asking him about his recent novel and whether he prefers living in the U.S. or Israel. But he also fears that he could face further interrogation next time he is at the airport.

Neither the Shin Bet nor a spokeswoman for the Population and Immigration Authority responded to questions about Rothman-Zecher or referenced him in their respective statements to JTA.

“I’ve been involved in left-wing activism for years, and I’ve taken for granted that at the airport, I’m treated like any other privileged citizen,” he told JTA. “And it’s worrying that next time I’m at the airport, I could be harassed.”

Zimmerman and Rothman-Zecher both said that the experiences reminded them of stories they’ve heard from Palestinian friends who complain of questioning or intrusive searches at the border. Fady Khoury, an attorney with Adalah, a Palestinian legal rights group, has challenged instances of Arab-Israelis being strip-searched or escorted by security while at the airport.

The questions, Amro said, were like those asked of the Jewish activists: What groups do you protest with? What are other activists’ names? How do you know them?

“It’s about harassment, it’s about making me feel like I’m watched and monitored by them,” he said. “They ask me about my previous arrests. I say, read my file. It’s all nonviolent. For them I am well known.”

This isn’t the first time American Jews have met trouble at the border because of their political activism. Following a 2017 law that allows Israel to bar activists for the anti-Israel Boycott, Divestment and Sanctions movement from entering the country, American Jewish BDS activist Ariel Gold was denied entry at the beginning of July. The BDS entry ban is one of several laws that Israeli NGOs have decried as a campaign against dissent.

Multiple government decisions, for example, have restricted the activities of Breaking the Silence, a veterans’ group that criticizes the occupation, and which critics say misinforms international audiences about the military and its activities. Last month, a new Israeli law barred the group from appearing at schools or speaking to students.

Michael Sfard, a leading Israeli human rights attorney, sees the questioning of activists as part of that trend.

“The Government of Israel has launched a campaign against what it calls ‘delegitimization’ of Israel,” Sfard wrote in a text message to JTA. “Unfortunately this applies to criticism of its occupation policy, which means it is a political persecution of opponents. So you don’t have to be a BDS supporter to have problems at the airport.”

Zimmerman is a co-founder of IfNotNow, a left-wing American Jewish millennial group that protests Israel’s treatment of the Palestinians. In 2016, she briefly worked for Sen. Bernie Sanders’ presidential campaign until a previous Facebook post of hers surfaced that included obscene language about Netanyahu. She currently works for Gisha, an NGO that focuses on freedom of movement for residents of Gaza.

Zimmerman does not support BDS, but her outspokenness has drawn harsh criticism from some pro-Israel activists. Arsen Ostrovsky, a pro-Israel human rights lawyer, tweeted this week that she should have been barred from entering Israel.

“Shame they let Zimmerman, an extremist, a racist, supporter of BDS and defender of terror against Israel, back into the country!” he wrote.

But the questioning of left-wing activists has given even some Israeli critics of the activists pause. Daniel Gordis, vice president of Shalem College in Jerusalem, wrote in 2016 that Zimmerman’s opposition to Israel’s 2014 Gaza war was tantamount to denying Jews the right to self-defense, and that she “positioned herself as an enemy of the progress that Jews have made.”

On Wednesday, however, he wrote that the questioning at the border was a “heavy-handed, amateurish display of power.”

“Israel needs a leader who can model devotion to the values of liberal societies, not undermine them for the sake of short-term political gains,” Gordis wrote in a Bloomberg View column about the detentions. “Appealing to citizens comfortable with authoritarian-leaning regimes may earn Netanyahu short-term political gains, but could eventually yield a country which no one would call ‘one of the world’s most open democracies.'”

Zimmerman said the experience has not deterred her from future activism. But she won’t be surprised if something like this recurs.

“I’m not a BDS supporter, but I’m pretty publicly critical of any effort to silence or stifle BDS, and I’m just kind of wondering when my turn will come,” she said. “The list is only going to grow of the people that are going to fall in the government’s crosshairs.”