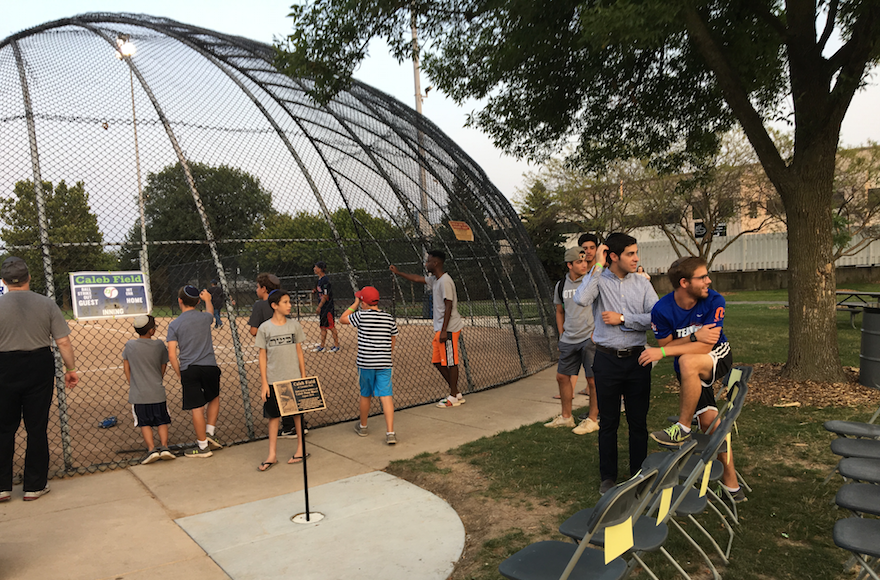 Caleb Field in Skokie, Ill., was dedicated Aug, 13, 2018 in memory of Caleb Maeir, a Jewish teen who died from cancer in 2017. (Jacob Miller)
Advertisement

SKOKIE, Ill. (JTA) — A Chicago-area ball field was renamed in memory of a local Orthodox Jewish teen who loved to play there and died last year after a long battle with cancer.

Caleb Field in Laramie Park was dedicated Monday in memory of Caleb Maeir, who died Dec. 9 at the age of 19.

An avid baseball and basketball player, Caleb was known for his warm smile and friendliness; one of his favorite parts of baseball was shaking his opponents’ hands after the game.

He was a junior at Ida Crown Jewish Academy when he was diagnosed with cancer in 2015. For 2 1/2 years, students and community members rallied around, forming a movement dubbed “Team Caleb” led by fellow student Roni Allswang that was dedicated to performing acts of kindness in his honor.

After high school, Caleb embarked on a year of yeshiva study in Israel, but was forced to return home as his cancer progressed. His supporters stepped up their efforts, raising $220,000 by selling neon-themed Team Caleb bracelets and fielding a team in the Jerusalem marathon. They donated proceeds to the Israeli foster home Beit El Ezraki and Shaare Zedek Hospital in Jerusalem.

After Caleb passed away, Ezra Jaffe, one of Caleb’s coaches, spearheaded the initiative to rename the much-used baseball diamond at Laramie Park.

Susan Aberman, president of Skokie Park District’s board of trustees, said the village is usually conservative with naming rights, but Caleb represents “exceptional contribution and service to the park district.” Ezra Jaffe said “the prayers at the [Western Wall] and universities and the charity raised was unbelievable. I know it made a difference.”

“This is an incredible way to celebrate and memorialize Caleb,” said David Maeir, Caleb’s father. “He loved baseball. What a better way than to name this field after him.”