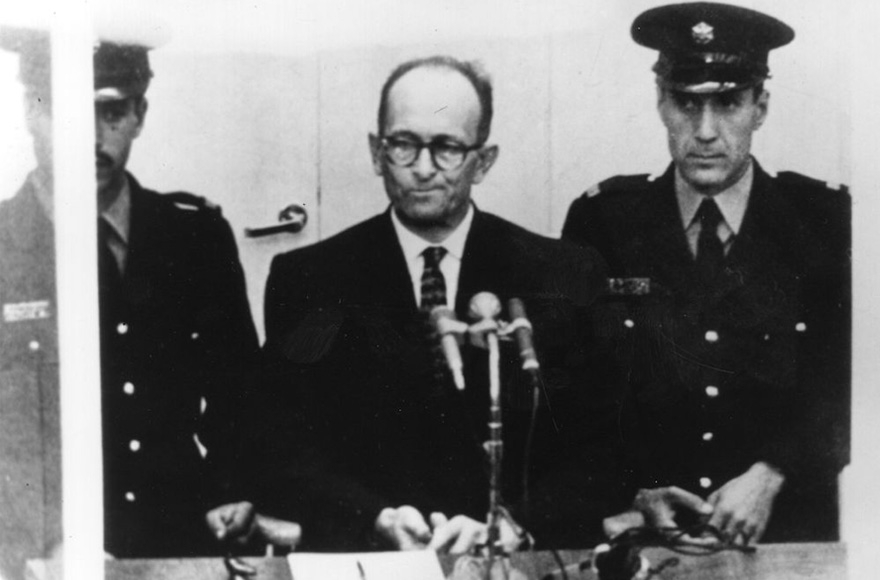 (JTA) — When undercover Israeli agents captured Nazi war criminal Adolf Eichmann in 1960, JTA’s reporters were just as surprised as everyone else.

An article dated May 23 of that year described an abrupt announcement of the operation by Israeli Prime Minister David Ben-Gurion to the Israeli Knesset. JTA described his mood as “hushed, almost incredulous.” Ben-Gurion’s announcement did not include the place and time of the capture, which had taken place 12 days earlier in Argentina, nor how it happened.

“For a moment, there was silence in the chamber,” the article said. “Then there was a burst of wild applause. Mr. Ben-Gurion’s promise that Eichmann will be tried under the law providing for trials of Nazis and Nazi collaborators was not lost on the House.”

The events of that story — how the Mossad found and apprehended the architect of the Holocaust in Buenos Aires — will be retold in the film “Operation Finale,” which premieres on Aug. 29.

But judging from JTA’s relentless coverage of Eichmann’s imprisonment, trial and execution, the aftermath of the capture was also a captivating drama. From the moment of the capture to his hanging two years later, JTA, then as now a news service syndicating its content to dozens of Jewish media outlets and subscribers, published more than 600 articles related to the ordeal.

On June 3, 1960, there was a brief article, gleaned from reports in the Argentine press, with some details of the Mossad operation. Agents who had been tracking Eichmann waited until he was walking home after his usual bus ride.

“A car moved quickly to the curb and Israel [sic] secret agents Jumped out and seized him,” JTA reported, quoting the Argentine reports. “His family became alarmed by his absence and checked hospitals and morgues. Realizing that he must have been abducted, the family fled into hiding, without knowing that six hours after the seizure, Eichmann was on an Israeli plane headed for Tel Aviv.”

The reports recalled that Eichmann had been living under an assumed name in Latin America for eight years.

Until the Mossad operation was revealed, the world had no inkling that Eichmann was living as a fugitive in Argentina. Seven months earlier, JTA had reported that he was suspected to be hiding out in Kuwait. And only a few days before Ben-Gurion’s announcement, a JTA story detailed preparations for Eichmann’s trial in Frankfurt — should he ever be located.

But once he was captured, JTA reported assiduously about his hearings and imprisonment, and how they were playing in Israel and around the world. Stories covered debates over the date and place of the trial; how it would relate to Israeli elections; protests by haredi Orthodox Israelis that Eichmann was transferred on Shabbat; and how the U.S. press at large was covering the story.

A series of articles focused on an Argentine-Israeli diplomatic crisis due to the unauthorized, secret Israeli operation on Argentine soil. Argentina wanted Israel to return the Nazi, and declared Israel’s ambassador persona-non-grata. Israel refused and was backed by the United Nations Security Council.

A day after Eichmann’s capture, JTA reported that he had identified himself in an initial hearing and, in German, pleaded not guilty to 15 counts, including crimes against humanity and crimes against the Jewish people. Even so, JTA reported that “[m]any Jews who were survivors of Nazi extermination camps have telephoned police headquarters volunteering their services as executioners of Eichmann in the event he is convicted and sentenced to death.”

The trial itself opened nearly a year later, in April 1961. In the meantime, a film on Eichmann’s capture called “Operation Eichmann” was screened in New York. Also, the Israeli government approved a $20,000 payment ($169,000 in 2018) to Eichmann’s German defense lawyer, Robert Servatius.

Two months before the trial, Servatius debuted Eichmann’s infamous defense that he was “only obeying orders” when, as a lieutenant colonel in the SS, he designed the systematic murder of 6 million Jews. Eichmann did not deny the facts of the Holocaust, the lawyer said, but believed he was only a “small cog in the machine.”

During the trial, Eichmann sat in a bulletproof, glass-enclosed case. The lead prosecutor was Israel’s attorney general, Gideon Hauser.

“There was only one man,” Hausner declared, “in the satanic structure of Nazism who was almost entirely concerned with the Jews and whose business was their destruction. This was Adolf Eichmann, who for years saw his destiny and calling – to which he was devoted with enthusiasm and endless zeal – the extermination of the Jews.”

At the start of the trial, according to JTA, Eichmann had a “pose of arrogant boredom.” But by the trial’s third week, “He had clearly lost weight. There was an inch gap between his neck and his shirt collar. The suit which had fitted so well two weeks ago was sagging. His face was wan.”

Like many JTA dispatches of the day, the article carried no byline.

JTA reported on the defense team’s contention that he was not in charge of the machinery of the Holocaust. But under cross-examination, according to the news agency, he admitted that he knew the term “Final Solution” meant mass extermination and proceeded with the plan — though he evaded other questions, including about his part in ordering poison gas for the concentration camps.

Eichmann later told the court that the Holocaust was the “gravest crime in human history.” He also said the Nazis planned to kill all 11 million Jews in Europe.

The trial concluded in August 1961, four months after its start. JTA reported that Eichmann said he received “fair and decent” treatment in his trial. In the months following, he wrote at least three volumes of memoirs, and that November his guards asked to be relieved of their assignment because “they could no longer stand the sight of the defendant.”

In December 1961, one day before he was found guilty and four days before being sentenced to death by hanging, Eichmann made a public statement.

“I carry my share of responsibility,” he said. “What was done cannot be undone. It was done as the result of mass hysteria, artificially stoked up and then used by individuals for their own ends.”

One month later, in January 1962, JTA reported that Israeli Prison Commissioner Arye Nir ordered Eichmann’s prison uniform changed from red to gray in order to improve his mood and keep him from suffering a nervous breakdown.

In March, Israel’s Supreme Court declined an appeal of Eichmann’s sentence. His May 31 request for clemency was declined, as was a request from philosopher Martin Buber not to execute Eichmann.

JTA reported that before Eichmann’s execution, two former Nazis tried to smuggle him a razor blade so he could kill himself. In one instance, they hid the blade under a stamp on a postcard. In another they embedded it in a box of matches. Israeli agents found the blades both times.

Eichmann was hanged on June 1, shortly after midnight. According to a pastor’s wife who visited Eichmann with her husband before the execution, the doomed man “showed no sign of confession or repentance.”