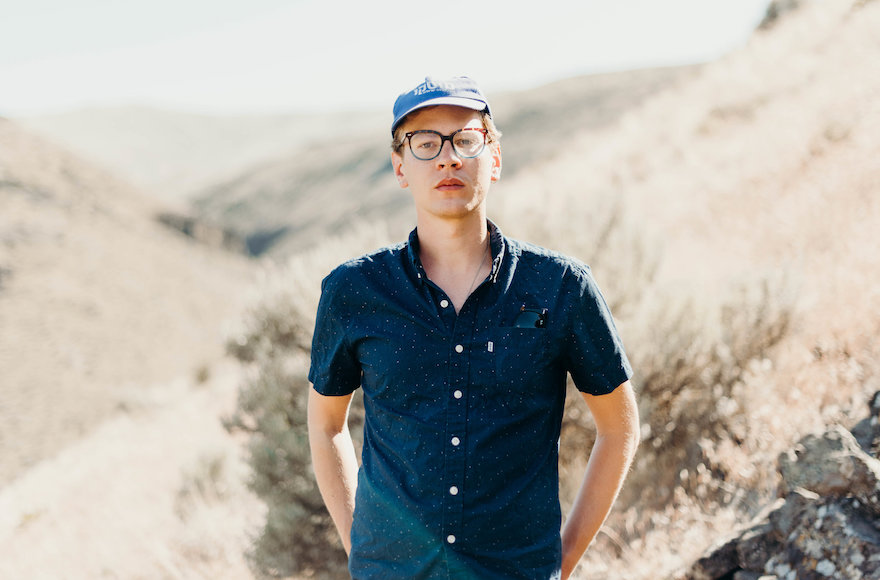 Ben Fisher's album "Does the Land Remember Me?" explores the history of Israel from multiple Israeli and Palestinian viewpoints. (Kendall Rock)
Advertisement

(JTA) — In 2014, early on in a three-year stint spent living in Israel, songwriter Ben Fisher took a vacation to Japan. Sitting in a hotel room in Tokyo, he spontaneously wrote a song about the founding of Tel Aviv — in about 15 minutes.

The story goes that the first Tel Aviv homesteaders chose their plots of land at random by picking seashells from the Mediterranean shoreline with numbers written in them. Fisher named the song “The Shell Lottery.”

Earlier that year, the Seattle-based songwriter had quietly released an album of country-tinged folk rock called “Charleston.” But Fisher, a self-described “huge musical nerd,” had long wanted to write a more ambitious concept album in the vein of Sufjan Stevens’ cult classic “Illinois” and “Michigan” records. “The Shell Lottery” was the moment he had been waiting for.

“I realized that it could serve as the start of something bigger, something more cohesive,” he said.

Over the course of the next year, while living in an apartment across from the Old City in Jerusalem, he went on to write most of the songs that wound up on his folky, heartfelt 17-track opus “Does the Land Remember Me?”

On the album, which comes out Sept. 7, Fisher inhabits a range of characters, from early Israelis nervous about their new country to Palestinians forced to leave their homes to a settler imagining his eventual expulsion from the West Bank. There are history lessons on Masada, terrorist attacks and Israeli figures such as singer Meir Ariel and astronaut Ilan Ramon, the first Israeli to make it into space (he was killed in the fatal Columbia mission in 2003).

Some songs also capture the 26-year-old Fisher’s contemporary perspective on the city and country he grew to love, from his apartment on what he calls “the seam” between Jewish western Jerusalem and Arab eastern Jerusalem. Each song has an explanatory liner note giving the listener context and, in some cases, a mini history lesson.

“You hear gunshots from terrorist attacks, you see dead terrorists in the public park adjacent to the walls of the Old City,” reads the liner note for “Horses and Helpers,” one of the tracks sung from Fisher’s contemporary perspective. “You are late to work because a car has plowed into your light rail station, aiming to run down people going about their daily business. You’re not allowed to leave the Damascus Gate of the Old City after getting coffee with friends because there has been a stabbing attack and they’re still searching for the perpetrator.”

The goal of the project, Fisher says, is to challenge those with deeply held ideologies on Israel from all sides of the spectrum. He wants listeners to realize that there is always “another perspective” and “another story” to hear about Israel, no matter what preconceptions one might have.

“My intent from the beginning was to write songs that a certain group of Israeli or Jewish-American society would agree with, and then have the next song be something totally out of left field, from a perspective that they had never considered from somebody they considered to be the enemy,” he said. “And all within the course of three minutes.”

Fisher’s fascination with Israel started after college when he realized he had a “black hole” in his knowledge about the Jewish state. His parents, whom he describes as “bacon-eating” Reform Jews, actually talked more about Egypt, where they lived for a time in the 1980s, than they talked about Israel. He majored in Middle Eastern studies and Arabic at the University of Washington.

But after graduating, Fisher set out to educate himself on Israel and its history. He read books on the country by Martin Gilbert, Daniel Gordis and Yossi Klein Halevi, and Israeli newspapers like Haaretz. He listened to Israeli music. He says he became a little “obsessed,” telling his parents he wanted to move to Israel with the idea of writing songs inspired by the country. 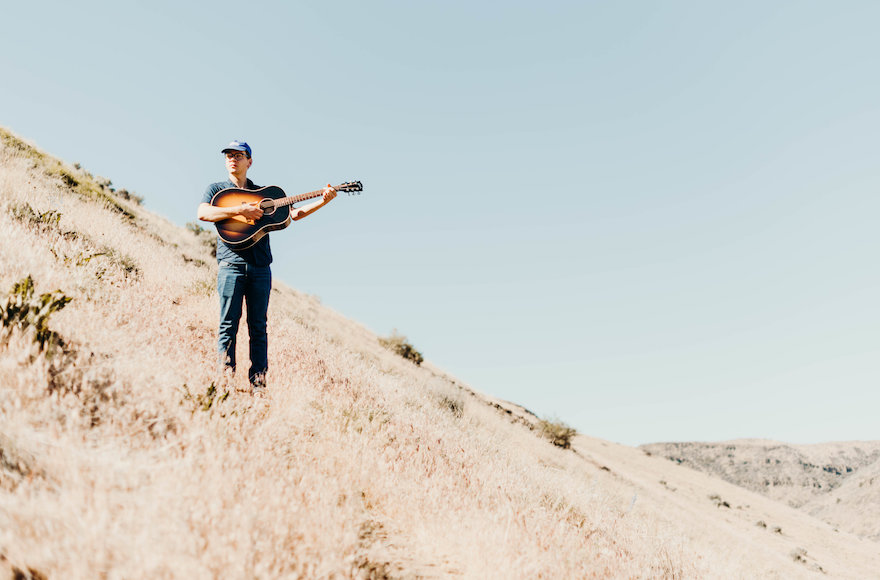 Fisher lived for three years across from Jerusalem’s Old City, or what he calls the “seam” between Arab eastern Jerusalem and Jewish western Jerusalem. (Kendall Rock)

Staying with the history theme, Fisher chose to live in Jerusalem over Tel Aviv for its rich past. He worked as a bartender, then as an editor and writer for The Jerusalem Post.

“There are parts of Tel Aviv where you walk around and you could be anywhere on the Mediterranean, or even anywhere in Southern California or Florida,” Fisher said. “I like a lot of things about Tel Aviv, but Jerusalem has a history that fascinates me.”

Some time after he finished writing the album’s songs, the well-known indie songwriter Damien Jurado flew in to play a show in Tel Aviv. Jurado, one of Fisher’s idols — they had crossed paths in Seattle’s folk scene — reached out to Fisher when he arrived, saying that the airline had broken his guitar. Fisher lent Jurado his guitar.

Months later, he figured he could call on Jurado for a favor in return. To Fisher’s surprise, Jurado agreed to produce his Israel album, and the whole thing came together over six days at the beginning of this year in Seattle’s Studio Litho (it’s owned by Pearl Jam guitarist Stone Gossard).

Fisher worries how people on both sides of the Israeli-Palestinian debate might respond to the record, but he’s also excited about its potential. He cited Lin-Manuel Miranda’s wildly popular musical “Hamilton” in talking about how art can dramatically increase people’s interest in a historical topic.

“It takes a work of art for people to get really interested in things. People are never going to read a book about Israel. They might watch a movie, but I think an easily digested three-minute folk song is a way to get them involved.”