Israel has announced more West Bank settlement construction. Both the left and right are angry. 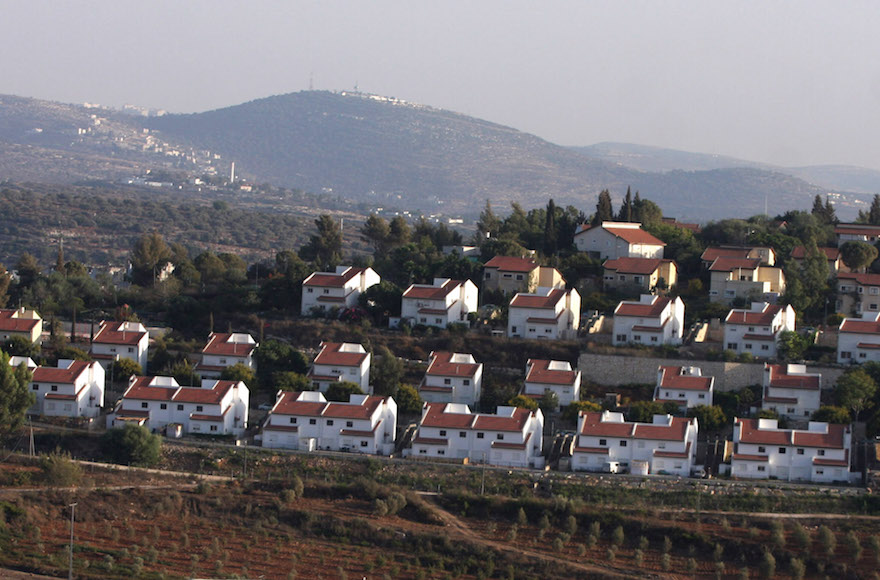 A general view of the the settlement of Halamish in the West Bank near Ramallah, Monday, Sept. 27, 2010. (Issam Rimawi/Flash90)
Advertisement

JERUSALEM (JTA) — The Israeli government advanced plans for the construction of more than 1,000 housing units in the West Bank on Wednesday, drawing condemnations from both the political left and the settlement movement itself.

Construction on 382 of the 1,400 units will be able to begin immediately, while the others will require several more approvals before breaking ground. A number of the units are slated to be built in isolated settlements, Haaretz reported.

Settlement expansion is “like sticking a finger in the eye of any possible peace process,” said Tamar Zandberg, chairwoman of the left-wing Meretz party. “The government doesn’t care about Israeli interests, only about the interests of settlers.”

The Yesha Council, which represents the settlement movement, complained that the Netanyahu administration was limiting settlement expansion.

“This is the smallest number of units that the committee has advanced in the last year-and-a-half,” the council said in a statement reported by The Jerusalem Post. “At past committee meetings some 2,000-3,000 housing units were advanced and this number is small compared to the tens of thousands of housing units authorized throughout the country. A nationalist government should be expanding construction and not reducing it.”

The council called “upon the prime minister to remove restrictions and to allow for construction throughout Judea and Samaria, just as it occurs in the rest of the country. This must be done today.”

The Knesset’s Land of Israel Caucus also protested the decision, saying that “the government decided to authorize fledgling communities, it must implement the decision more energetically and actively promote the regulation of these communities, and not go the opposite way.”

While Trump initially declared settlement expansion to be “unhelpful,” he subsequently changed his tune, declining to condemn Israel’s decision to approve the construction of more than 2,000 settlement homes in May. According to Peace Now, Israel has approved plans and tenders for nearly 14,000 units since the 2016 elections, a significant increase over the 4,476 units approved in the year and a half before Trump’s victory.

Despite this, many settlement leaders feel boxed in and have appealed to those close to the Trump administration to lift curbs on expansion.

“During eight years of Obama we couldn’t build like we wanted, and now under Trump we are building but not enough,” Yesha Council CEO Yigal Dilmoni told former Arkansas Gov. Mike Huckabee, the father of White House press secretary Sarah Huckabee Sanders, at a ceremony in the Efrat settlement earlier this month.

“There are still limits. We can’t build new settlements or big neighborhoods.”