In Brooklyn, a Jewish Latina democratic socialist rallies for a State Senate seat 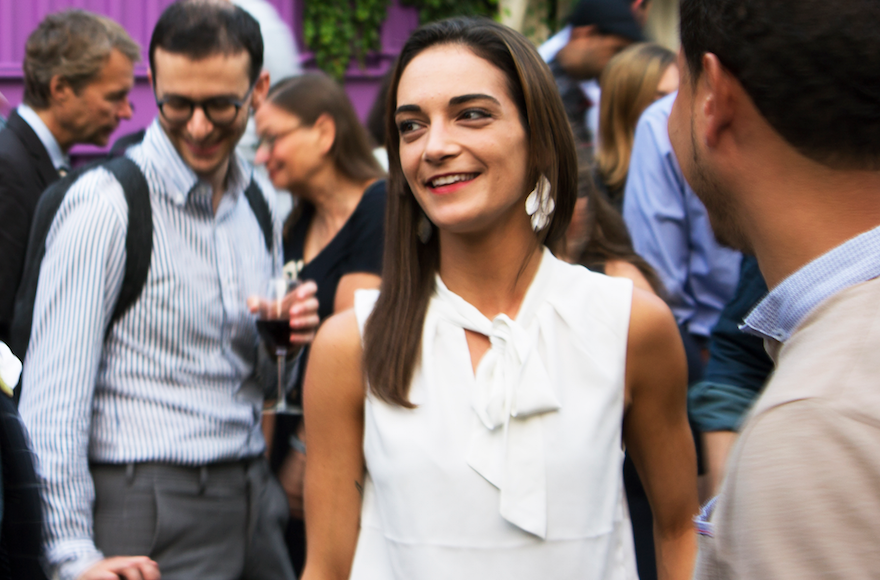 The Jewish Vote, the fundraiser’s host, is the electoral outgrowth of the progressive Jews for Racial and Economic Justice, or JFREJ, which remains its sister organization and where Salazar, according to her campaign, works as a staff organizer.

Launched this summer, The Jewish Vote hosts political events and canvasses for its preferred candidates. The group has initially endorsed only four progressives, including Salazar and Democratic gubernatorial primary challenger Cynthia Nixon.

The Jewish Vote is “trying to build power and harness the power of the progressive Jewish resistance that we know is already out there,” Executive Director Audrey Sasson said. “The majority of Jews have these values [and are] opposed to the misogyny and the bigotry of this [the Trump] administration.”

Sasson, who is also the executive director of JFREJ, says that The Jewish Vote’s efforts are based on the concept of “doikayt,” “hereness” in Yiddish, “that tells us home is wherever we are and our responsibilities are for the people around here.”

“We need to build real power as progressive Jews,” she said. “We have stayed too much on the sideline.”

And if Salazar and The Jewish Vote succeed, it will mark a shift from traditional New York Jewish politics, where politicians  have long held mainstream pro-Israel stances and maintained close ties with centrist Jewish power brokers. Salazar is a member of the Democratic Socialists of America, or DSA, which angered pro-Israel groups last year when it endorsed the Boycott, Divestment and Sanctions movement targeting Israel.

While Salazar’s campaign focuses prosaically on the needs of her district, which includes a swath of north Brooklyn neighborhoods such as Bushwick, Williamsburg, East New York, Bedford-Stuyvesant and Brownsville, she is open to discussing Israel at length, saying that she supports BDS. 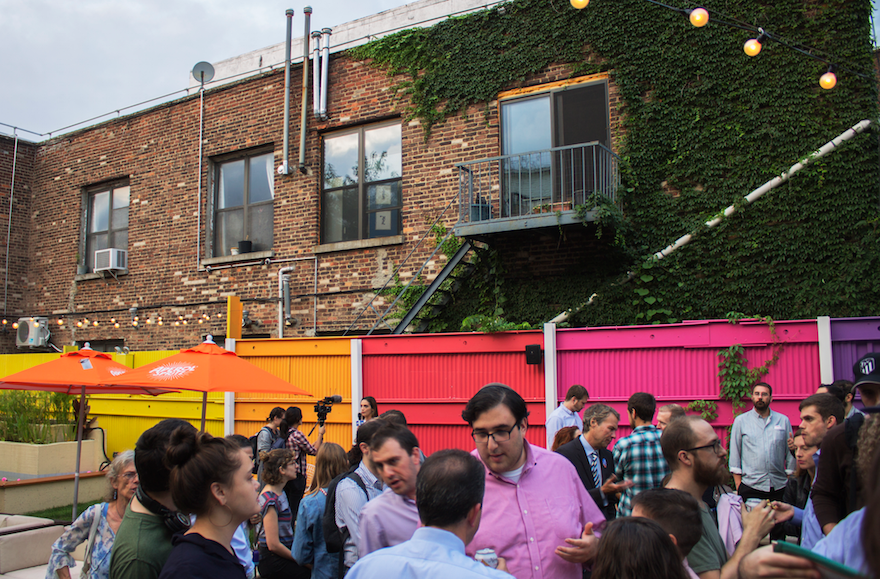 Salazar has centered her State Senate campaign around what she sees as combating injustice, strongly advocating for universal rent control and securing state financing for affordable housing. She supports the passage of the New York Health Act to ensure health insurance regardless of pay, full funding for the MTA capital program to stabilize and expand subway service and, notably, has been advocating for sex workers’ rights.

Her interest in sex workers’ rights has garnered her national media coverage. She wants to decriminalize sex work, citing a “loitering for the purpose of prostitution” law that many argue overwhelmingly targets black women, Latinas and transgender individuals.

Born in Miami, Salazar was raised in a “secular and mixed family, Catholic and Jewish,” she said, noting that much of her family lived in Colombia at the time and “most of them” still live there. The former Columbia University student — who attended the school but did not graduate — said that much of her Jewish political education came in college, where she also developed her Jewish identity. She told Gothamist that while she was once a Republican and pro-life, her views changed in college — coinciding with her own “Jewish evolution.”

At Columbia, where she took courses in Middle Eastern studies, she founded a chapter of J Street, the left-wing Mideast advocacy group that supports a two-state solution and is often highly critical of the Israeli government. She also worked with IfNotNow, a group of young Jews that opposes Israel’s treatment of the Palestinians and its purported American Jewish enabling.

“I visited the West Bank as a student and that really informed my political evolution on it. It was an eye-opening experience for me,” she said. “It’s just about looking at the issue through a nuanced lens and understanding why I feel this way — why anybody participating in Palestinian solidarity feels that Israel is operating harmfully in the West Bank.”

Asked later to clarify her views, however, Salazar declined to endorse a two-state solution.

“I do not think that it should be decided by Americans like myself or by the U.S. State Dept[artment], so I don’t take a firm stance on that,” Salazar told JTA in a text message. “I think that a just solution needs to affirm the full and equal humanity of both Palestinians and Israelis, and I haven’t seen a two-state solution that would achieve that.”

Beyond Israel activism, Salazar says that she began seriously exploring her Jewishness after her father died when she was 18. She said she was previously aware of her “Sephardi surname” and knew that “some of my relatives were Jews.” She embraced an activist, tikkun olam-central interpretation of Judaism, eventually finding ideological unity with JFREJ.

“I definitely draw inspiration from a legacy of Jewish tradition … of building solidarity with other marginalized communities,” she said, referencing Jewish activism in the civil rights movement. “It informs my worldview. When we see injustice, we need to speak out and take action decisively, actually do something about it. To me, that’s part of what it means to practice Judaism.”

She said that JFREJ has been “a political and in many ways sort of spiritual and communal home for me for a long time.” She has been involved with the group since 2014 and increasingly so since 2016, when she was named one of its Grace Paley Organizing Fellows, graduating from the program in May 2017.

Salazar says she became a member of the Democratic Socialists of America about two years ago. The far-left group is anti-corporate (Salazar has rejected corporate campaign donations), pro-labor and advocates extending Medicare to everyone. (Sen. Bernie Sanders, I-Vt., considers himself a democratic socialist but is not a DSA member.)

“In a society like ours, when we define socialism, it is so much more than the textbook definition of workers seizing the means of production,” Salazar said when asked to elucidate on the term. “For me, it means fighting to build a society in which everybody can live in dignity and have the resources to live as equitably as possible [and to have] the resources that we need not only to survive but to thrive in our society. It’s about empowering workers as far as my own theory of change, but by extension empowering the most marginalized and vulnerable members of our society.”

Last year, DSA voted to endorse BDS at its annual convention. After the vote, members launched into an anti-Israel chant. Jewish organizations like the Anti-Defamation League say the BDS movement is anti-Semitic because rather than criticize Israeli policy, it aims to demonize and delegitimize the Jewish state.

“The goal of BDS is to have some measurable effect in order to force the more powerful actor — the state [Israel] — to change course,” Salazar said. The goal is “ideally to grant Palestinians citizenship and end the occupation.”

She added: “Obviously I would reject [the argument] that it’s harmful to Jews in general.”

Asked about the concerns of Jewish organizations and individuals over DSA support for the boycott movement, Salazar explains that when looking for allies, she believes in placing primacy on coalition building over ideological perfection.

“There are organizations that I want and/or need to work with in order to build power and achieve a common goal who may have a political stance somewhere that I don’t support,” she said. “With DSA, that isn’t the case. I do support BDS, so I don’t mean to suggest” that there is an ideological divergence.

“JFREJ has no position on BDS. Neither does The Jewish Vote,” Sasson told me. The group opposed a New York City Council resolution condemning the movement, mostly on free speech grounds and citing Islamophobia.

“BDS is a tactic and I don’t think a tactic is inherently anti-Semitic,” said Sophie Ellman-Golan, the deputy head of communications for the Women’s March and a longtime JFREJ member who attended and helped facilitate Salazar’s campaign event. “I’ve seen it [BDS] used in ways that feel anti-Semitic and in ways that are not at all.”

While Salazar does not deem BDS as inherently anti-Semitic, she recognizes anti-Semitism as a real phenomenon across the political spectrum, including the left on which she is embedded.

“I do think that we’re very seriously still confronting anti-Semitism,” she said. “It often changes form … It’s still a serious threat, and we see it on the right and the left.”

She is firm in her belief that progressivism is fundamentally a preferable political home for Jews.

“Conservative ideology does not serve the interest of Jews, especially … where power isn’t on our side, statistically. I think it’s in our interest to support progressive policy.”