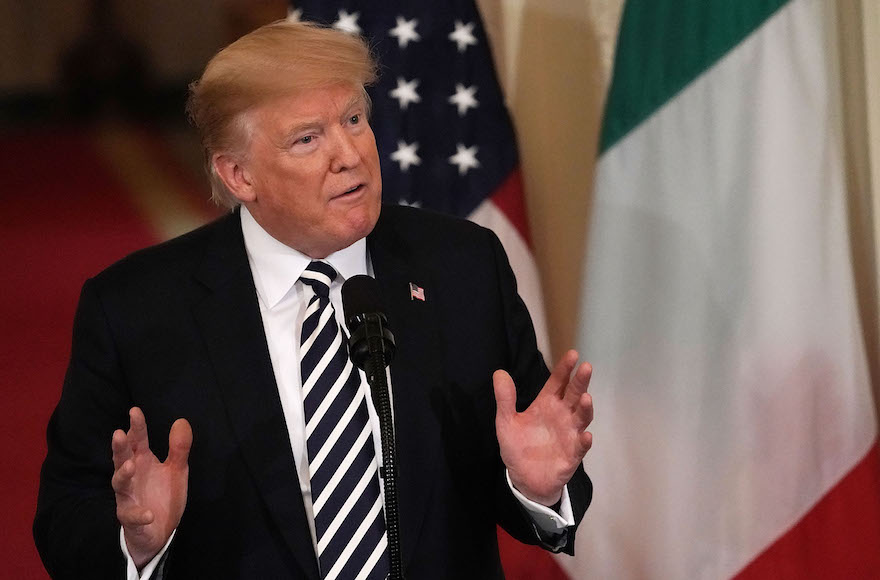 (JTA) — President Donald Trump has come under fire, including from the the Anti-Defamation League, for apparently tweeting support for a white nationalist conspiracy theory that whites in South Africa are in danger of genocide.

In a tweet posted after Fox News host Tucker Carlson’s segment on land reform in South Africa, Trump wrote that he had “asked Secretary of State @SecPompeo to closely study the South Africa land and farm seizures and expropriations and the large scale killing of farmers.”

I have asked Secretary of State @SecPompeo to closely study the South Africa land and farm seizures and expropriations and the large scale killing of farmers. “South African Government is now seizing land from white farmers.” @TuckerCarlson @FoxNews

While violence against white farmers has declined in recent years, many far-right figures, including the conspiracy theorist Alex Jones, believe that white South Africans are in danger of being “wiped out.” Jones compared the elected government of South Africa to Hitler during an episode of his show “InfoWars” broadcast several hours before Trump’s tweet.

The same narrative has shown up on white nationalist and neo-Nazi websites such as Richard Spencer’s AltRight.com and Stormfront.

South Africans have been debating the issue of land reform for years. Prior to the end of apartheid, nearly 90 percent of the country’s land was in the hands of white people. Since the country’s indigenous population achieved self-rule in the 1990s, the figure has dropped but still hovers above 70 percent.

The current controversy comes after the ruling African National Congress backed a controversial proposed constitutional amendment that would allow the government to expropriate land without compensation. Two years ago, South Africa lawmakers passed a bill permitting “the expropriation of property for a public purpose or in the public interest, subject to just and equitable compensation,” but little has changed, sparking outrage. As the proposed amendment has yet to be passed, no land has been confiscated without compensation.

The South Africa government responded to Trump’s tweet with a statement on Twitter saying it “totally rejects this narrow perception which only seeks to divide our nation and reminds us of our colonial past.”

South Africa totally rejects this narrow perception which only seeks to divide our nation and reminds us of our colonial past. #landexpropriation @realDonaldTrump @PresidencyZA

In a statement, the ADL said it was “extremely disturbing that the President of the United States echoed a longstanding and false white supremacist claim that South Africa’s white farmers are targets of large-scale, racially-motivated killings by South Africa’s black majority.”

The ADL also said that white supremacists in the United States have made such claims for years.

Trump has struggled to shake off accusations of racism. After last year’s clashes between white supremacists and counterdemonstrators that left one dead in Charlottesville, Virginia, Trump issued a statement saying there were “ very fine people, on both sides.”