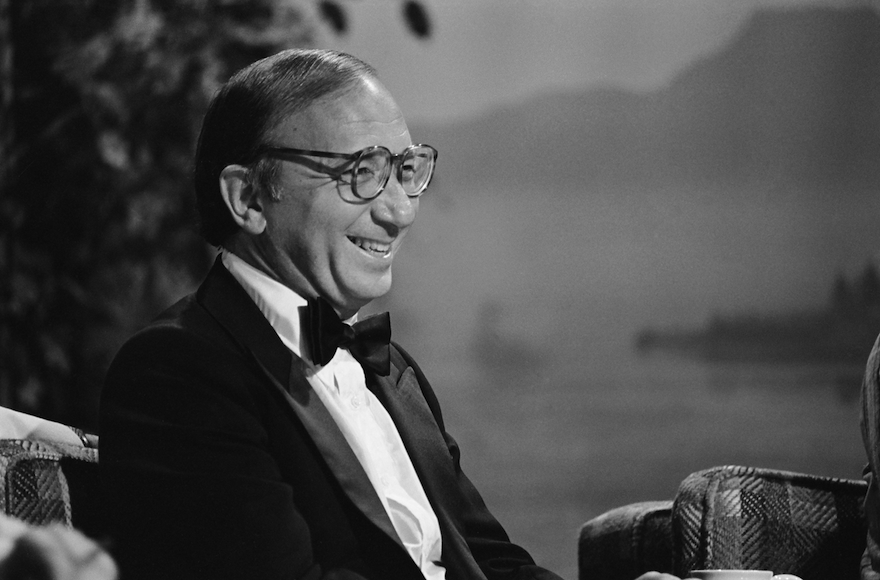 (JTA) — Playwright Neil Simon, known for such Broadway hits as “The Odd Couple,” “Barefoot in the Park” and “Lost in Yonkers,” has died.

Simon, who earned a Pulitzer Prize and a Tony Award, died overnight Saturday at New York-Presbyterian Hospital in New York City from complications with pneumonia at the age of 91.

No writer of non-musical comedies was more successful in the second half of the 20th century, and no one else so frequently, successfully nor wittily plumbed the anxieties of middle-class American Jews and the family issues that plagued them. The themes of his plays include romance, adultery, divorce, sibling rivalry, cancer and fear of aging — but with a knack for one-liners that kept audiences laughing through the pain.

Simon began his career in television, on the writing staff for Sid Caesar for “Your Show of Shows,” working with future Jewish comedy legends Mel Brooks, Carl Reiner and Larry Gelbart.  He later wrote for “The Phil Silvers Show.”

In 1961, his first play, “Come Blow Your Horn,” hit Broadway. It was a modest success, but was the start of something big. “The Odd Couple” would have a wildly successful run, would be adapted into a smash movie with Walter Matthau and Jack Lemon in the roles of a slovenly sportswriter and his fastidious roommate, and inspire a sitcom that ran for years on ABC. In 1966 he had four plays running on Broadway at the same time.

During his career he wrote more than 30 plays and about as many movie screenplays, some original and most adaptions of his plays. “The Goodbye Girl” won an Academy Award for Richard Dreyfuss, playing the role of an incorrigible actor; “The Heartbreak Kid,” starring Charles Grodin and Cybill Shepherd and directed by Elaine May, has been described as a worthy successor to Hollywood’s classic screwball comedies and as a disparaging, overly stereotypical portrayal of marital discord among suburban Jews.

“The Sunshine Boys” (1976), about another pair of bickering frenemies, earned an Oscar for the then-elderly George Burns, playing one half of a legendary, estranged and fatally dysfunctional vaudeville duo.

Simon gained additional fame in the 1980s with his semi-autobiographical trilogy — “Brighton Beach Memoirs” (1983), “Biloxi Blues” (1985), and “Broadway Bound” (1986) — which critics agreed brought gravitas and fresh life to a career that had begun to flag after the huge hits of the ’60s and ’70s.

In 1991 he won both the Tony Award and the Pulitzer Prize for “Lost in Yonkers,” another autobiographical comedy.

Simon was born in New York to Irving Simon, a garment salesman, and Mamie (Levy) Simon, a homemaker. His parents had what he described as a “tempestuous marriage,” in which his father left the family at least eight times. Simon said he took refuge in movie theaters to escape his troubles at home. Those troubles also inspired him to become a writer, which he said helped him to become independent of emotional family issues.

An interviewer once asked Simon what effect his being Jewish had on his humor. “That’s a tough question,” Simon replied. ”Humor is a way of expressing your protest and being able to laugh, too. What Jews do is laugh at their predicament, and it’s what blacks do, too. I do my funniest writing when I’m in a predicament. If a play is out of town and needs work, I’ll do my best work. When I’m in an elevator that’s stuck, I can keep everyone laughing. The other thing about Jewish humor — I don’t know if it was always this way; I don’t know if the Jews in Egypt were making jokes about Pharaoh — is that it takes a great deal of intelligence. It takes an adventurous mind.”

He and his older brother Danny Simon, in addition to cranking out sketches for comedians like Caesar, Jerry Lewis and Jackie Gleason, wrote summer revues for the Tamiment resort located in the Pocono Mountains.